Normally when a cyclist discovers their bike has a mechanical issue and they can’t use it to ride, they simply get it fixed before the race. However, what if the mechanical issue can’t be fixed at all – and the problem is that a vital piece of equipment on the bike isn’t allowed to be used?

That was the scenario facing Justin Williams at the beginning of the Ladner Criterium on Saturday night as part of BC Superweek and the Tour de Delta. The Race Commissaires informed the riders that Cycling Canada’s rules dictate that disc brakes are not allowed in road competitions. It left Williams without a bike to ride – until he looked to Cyclance Cycling teammate Joelle Numainville. Turns out there must have been some luck in that bike, as Williams sprinted to victory in the same race Numainville won just one year ago.

“They told us on the line we couldn’t ride the bike, so it was a little bit of a surprise,” said Williams. “She was just so great in letting me use hers, she just pointed to her bike and was like, ‘You want it?’ and I said, ‘Yeah, that’d be great.’”

The 28-year-old Williams was second in Ladner last year and really pushed Numainville’s bike to the limit on the last lap – including the tires. He finished the 60-lap, 54-kilometre race in one hour, 13 minutes, and 25 seconds.

“We have a great tire sponsor in Vittoria. I just really trust them. Honestly, I don’t even think about it because they’ve been so great throughout the season,” the ten year pro and Los Angeles resident said.

The last few laps of the race were hectic, with a number of attacks coming from both teams and individual riders, including second place finisher John Murphy (Holoweski | Citadel Cycling Team) and third place finisher – and Murphy’s teammate – Tyler Magner. Williams was able to hold them off though.

“I’m grateful that guys gave me respect and on the last lap I was on the right wheel. Going into the second to last corner, Magner let a little gap open and maybe he was going to take a run at Murphy, maybe he was going to let him roll, but I just couldn’t take that chance,” Williams explained. “After everything that happened before the race, I really wanted it. I shot Magner’s inside, which I normally wouldn’t do but it felt like the right thing in the moment.
”
With three wins at the Tour de Delta last year and three Canadian National Road Race Championships (2015, 2013, 2010), Numainville has done pretty well on her bike – now if only she can get it back from Williams. He might not be so eager to part with it after Saturday’s win in Ladner. 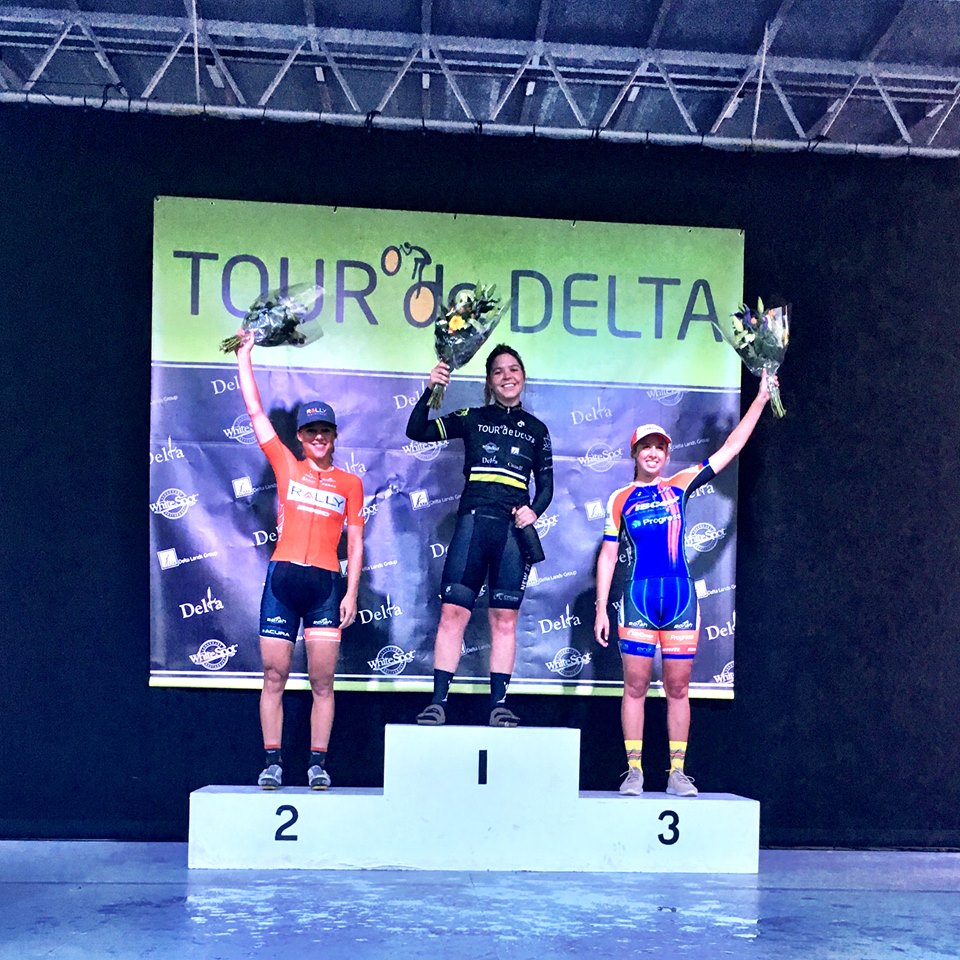 Already a decorated cyclist in her homeland of New Zealand, Holly Edmonston is on her way to making a name for herself at BC Superweek after winning the 2017 Ladner Criterium on Saturday night. The 21-year-old Kiwi sprinted ahead of a large pack on the last lap to claim the 40-lap, 40.5 kilometre race in a time of one hour, one minute, and eight seconds.

On the last corner before the finish line, it seemed like Edmonston and her Cycling New Zealand team came out of nowhere to put themselves in the mix to be atop the podium – and it worked. “We just went for it on the inside of the back straight, managed to get around the corner first and then I just gunned it,” she explained.

The race progressed slower than Friday’s BC Superweek and Tour de Delta opener, the MK Delta Lands Criterium, due to the caliber of the field, which is among the strongest ever at this event, and a tactical approach from the riders and teams. However, the last lap came down to a sprint, in which Edmonston’s team drew upon their extensive track experience when they saw the door open.

“Definitely, we actually treated it like an elimination race most of the time!” exclaimed Edmonston.

Montreal’s Kristi Lay made it to the podium for the second straight night at BC Superweek after winning the MK Delta Lands Criterium. The 29-year-old Lay – a former elite speed skater – looked like she was riding for a teammate during the final lap, but her Rally Cycling cohort Allison Beveridge didn’t quite make it to her wheel.

“It was a bit crazy, the last lap there, everyone was gunning for the second to last turn because you want position (going into the final turn). With Rally, we have such great sprinters and anything I can do to get them into position (I will),” said Lay, who won gold at the 2015 Pan-Am Games, silver at the 2016 World Championships and 2015 Pan-Am Championships, and bronze at the 2016 Rio Olympics and 2015 World Championships for Canada. “Sometimes it doesn’t work in a race, but you’ve got to just keep going to the finish and it worked for us!”

The riders were well aware that the first 39 laps were a bit methodical, and as a result, the final lap was breakneck. Aussie Josie Talbot, riding for ISCorp p/b Progress, wound up just behind Edmonston and Lay in third place. Talbot had only three teammates in the race, so it was tough for them to tackle attacks from powerhouses like Rally, Trek Red Truck, and The Cyclery – 4iiii. The lack of numbers affected their ability to build a team strategy for the final lap.

“We were just trying to work off the other teams to be honest because we’re a smaller squad. It was so hectic that last lap, I didn’t know if I was even going to be in the sprint, but I’m pretty stoked to make it through all that traffic on the last straight,” said Talbot, who won the junior team pursuit world title and two bronze medals at the 2014 Junior Track World Championships.

BC Superweek and the Tour de Delta continues on Sunday with the White Spot | Delta UCI 1.2 Road Race. The women’s race starts at 9:30 am while the men begin at 1 pm.