A few rain showers didn’t damper the spirits of fans and riders in attendance for the opening of the 14th annual Tour de Delta and 4th annual MK Delta Lands Criterium Friday night in social heart of North Delta.

In his post-race interview, Ryan Roth of Silber Pro Cycling Team said he is looking forward to taking a break after riding the BC Superweek series over the next ten days, but with the way he won on Friday, he may just want to put his vacation plans on hold.

Roth, who now has four first place finishes in 2014, won the 1.2 kilometre, 40 lap race with a time of one hour, three minutes, 56.2 seconds, nearly a full six seconds ahead of second place.

“We’re going to finish off the week here and then have a bit of a break, I’m running on fumes a bit right now,” the 32-year-old Roth said.

The Kitchener, Ontario native made his move with less than ten laps to go and opened a pretty big gap against the rest of the field.

“There were two guys a little bit in front and I kind of bridged across and then I felt like I was a little bit stronger so why not go along and not worry about sprinting somebody to make it to the end,” said Roth, a twelve year pro and 2012 Canadian National Road Race Champion.

While Roth may not have had to sprint to the finish, that wasn’t the case for a group of nine riders, who were looking to stake their claim on the podium. In the end, it was Bally, Pennsylvania’s Shane Kline of Team SmartStop Pro Cycling who took second place. Pierrick Naud of Team Garneau-Quebecor was third.  “Ryan was just pretty much on another level tonight,” Kline said. “I thought the guys at the front chasing would be able to pull him back, but he just drilled it and rode us all into the ground, I thought first might happen, but unfortunately we were just sprinting for second.”

Kline is quick to credit his teammates for the podium finish.

“They took me up to third turn after the climb, put me in good position, and then from there, I just had to sprint like I was sprinting for first,” added Kline. “This course is just a race to that last turn because the finish is so close to the turn that I was just looking for that turn and trying to get there as fast as I could.” 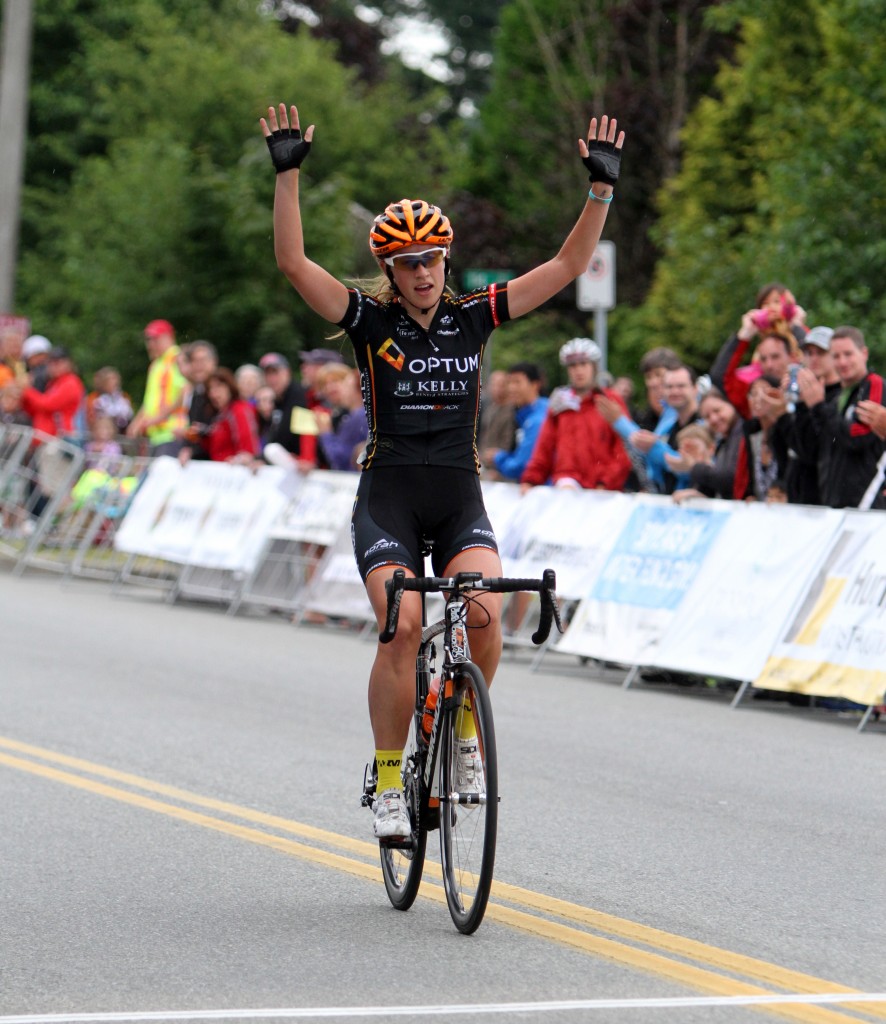 The women’s criterium started with damp roads, but as the evening and race wore on, things started to dry up. As a result, some of the teams got a bit more aggressive in pushing for the first win of BC Superweek, including Team Optum p/b Kelly Benefit Strategies, which finished with four of the top five riders overall.

And it was Vancouver rider Denise Ramsden of Team Otpum, who finished second at the same race a year ago, claiming victory. “It was good, I really didn’t want to come second again. We have a really strong team here and it was good to come out on top,” Ramsden expressed afterward.

Team Optum almost swept the podium, if not for Glotman Simpson Cycling rider Alison Jackson of Abbotsford, who was just under three seconds behind Ramsden. Optum rider Jade Wilcoxson of Talent, Oregon was third while her teammates Leah Kirchmann and Annie Ewart were fourth and fifth, respectively. Ewart also won the U23 title at the race.

“We wanted to make it a good race, we didn’t want to just be riding around,” added Ramsden, who was a member of the 2012 Canadian Olympic Team at the London Games and competed in the Road Race and Individual Time Trials. “We were aggressive right from the start and it paid off.”

Despite the fact that conditions were less than ideal at the start of the race due to some damp roads, Ramsden doesn’t think hindered her at all.  “I’m pretty comfortable cornering, but definitely in the rain, you don’t want to take any risks,” she said. “It was good the last couple of laps to be able to rail, especially in that first downhill corner.”

Jackson and her teammates were aware of how Optum and some of the other teams were racing, but stayed focused on their performance.

“We just let them do their thing because we didn’t really know what they were going to do. Just not letting anything get away is really how I ride,” explained Jackson. “Sometimes I get really anxious when there are people who go off in front and I want to catch everything. To know that there are tons of strong riders who also don’t want things to get away, so I just tucked in behind them, didn’t do all the work on my own and was in a good position to watch out.”

The field of 56 riders enjoyed the MK Delta Lands Criterium course, which makes its way through the streets of North Delta.

“It’s pretty fun, I like having the hill in there, I think it makes it a much harder course than just being a flat course, it splits things up a bit more,” beamed Ramsden. “It’s a great start to BC Superweek, first… third… fourth… fifth – we really couldn’t ask for a better start.”

BC Superweek continues with the Brenco Criterium in Ladner, which is Stage 2 of the Tour de Delta, on Saturday night. The Tour de Delta wraps up Sunday morning with the White Spot | Delta Road Race in Tsawwassen.