Roth broke away from eventual second place finisher Kaler Marshall of Canyon Bicycles – Shimano with four laps to go and built a large gap which he followed all the way to the finish line, completing the 134 kilometre trek in three hours, 30 minutes, and 37 seconds. The Guelph, Ontario native and his Silber teammates sat back in the early part of the race and waited for things to unfold.

“The start was probably the tamest White Rock Road Race I’ve ever seen, we were very controlled and the break was only three guys, so it wasn’t too stressful,” said Roth. “My teammate Nigel Ellsay was fourth last year and we also had Nicolas Masbourian riding really strong, so between the three of us whoever could be up there, we’d roll the dice on that. I figured we’d catch the break at some point and then all hell broke loose at the end.”

When it came down to Roth and Marshall with five laps to go, the 33-year-old decided to simply ride his tempo.

The win is Roth’s second at BC Superweek this year, after he also won the Tour de Delta White Spot | Delta Road Race a week ago. For Marshall, who is from Walla Walla, Washington, he and his Canyon teammates were fighting to bring back the breakaway before Roth bridged up.

“We knew there were riders up the road and we knew we wanted to bridge up there, it was just a matter of when,” said the 30-year-old, who won the Tour de White Rock omnium, or overall prize, after a sixth place finish in Saturday’s Choices Markets Criterium. “I knew I probably wasn’t going to stick with Roth’s attack, so if I went early and could get to the move, it was a great opportunity to stay there and let him bridge up and see what shakes out at the end.”

Harrisonburg, Virginia’s Timothy Rugg saw his Herbalife p/b Marc Pro & Nature’s Bakery captain Chris Harland-Dunaway finish fifth at this very race in 2015, so the team drew on previous experience and had some specific tactics to use.

“I was playing a little more aggressive than Chris, trying to protect him, and he made the right move. It was the same move he made last year, going right at the start/finish of the short laps and unfortunately that move didn’t quite make it up, so I saw an opportunity to bridge up to him, we rode for a little bit, then the field came back, and then he just kept trying to go until the elastic was broken and then I just time trialed it in for third,” he explained.

2016 was the 37th edition of the Peace Arch News Road Race, one of the most historic and prestigious races in North America. 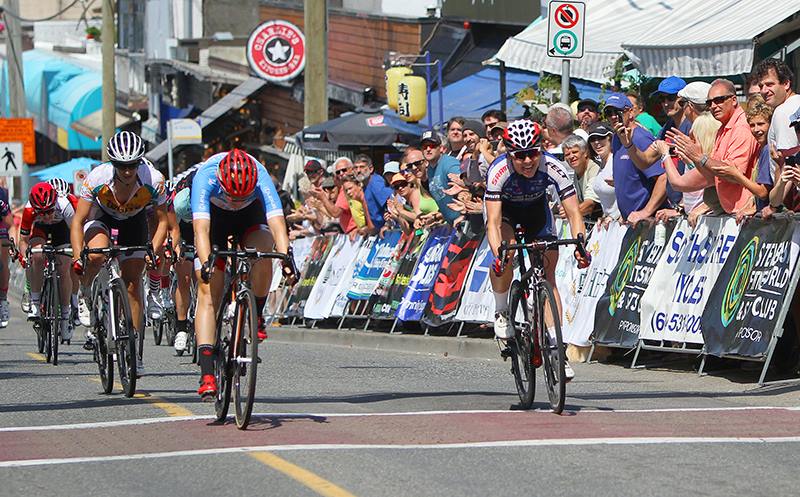 There was a familiar feel to the women’s podium at the Steve Nash Fitness World presents Tour de White Rock Peace Arch News Road Race. Not only had all three women previously been on the podium during BC Superweek this year, but after Sunday, they had a combined 13 podium appearances between them.

In the end it was Canadian National Team member Stephanie Roorda of Vancouver who sprinted across the line ahead of compatriots Alison Jackson of Twenty16 RideBiker and Sara Bergen from Trek Red Truck p/b Mosaic Homes, finishing the 80 kilometre race in two hours, 32 minutes, and 23 seconds.

The victory is Roorda’s first at BC Superweek after second place finishes at the MK Delta Lands Criterium ten days ago and the Giro di Burnaby on Thursday, and a third place finish in the Brenco Criterium eight days ago. Despite being a track racer at heart, she felt today’s road race would end up being about the sprint.

“I was trying to watch Sara and the teams like OPUS and the strong riders up the hills and see if they were going to make the separation. I was hoping for a bunch sprint, that was what I wanted,” the 2012 UBC Grand Prix winner said. “I think if you get the first jump, then you have the advantage and that’s kind of what I was looking for. I know the other girls are pretty strong sprinters as well and I thought if I just got that initial jump on them, I could maybe hold them off for the end.”

The 29-year-old will now race the Cascade Cycling Classic in Oregon before heading off to Europe to get into some races with the Canadian National Team.

2016 marks the third straight year that former Abbotsford resident Jackson claimed the Tour de White Rock omnium. After a second place finish the night before at the Choices Markets Criterium, winning the $1,000 omnium prize was definitely on the Trinity Western University grad’s mind.

“I was just wanting to win the omnium, and there’s more points available here in the road race than the criterium,” she said. “I was just watching Sara, not letting anything get up the road where I had to chase back and then trying to win the race. “I know that I have a pretty good sprint and this uphill to the finish suits me, so I just put all my eggs in the basket, not doing anything, using as little energy as possible, playing some games out there, tactical games, and then waiting for the sprint.”

Jackson, who makes her home in Vermillion, Alberta, wound up BC Superweek with five podium appearances, including five straight to close out the series. She’s also historically done well at the Tour de White Rock, where she now has seven top-six finishes in the last three years. She now turns her attention to Rio, where she is an alternate for the Canadian Women’s road team for next month’s Summer Olympics.

Trek Red Truck p/b Mosaic Homes, which is a team based out of Vancouver, was prominent throughout BC Superweek and a big reason why is local rider Bergen, who won the Choices Markets Criterium and was second at the White Spot | Delta Road Race a week ago and Brenco Criterium eight days ago.

“We definitely always ride the aggressive race, I want to give big congratulations to Steph and Alison, they rode incredibly smart. We tried to make it hard on the hills and keep the pressure on them, but Steph pulled off a really fantastic win,” she said. “I definitely had my eye on her, she’s super crafty, super strong, and also Alison as well.”