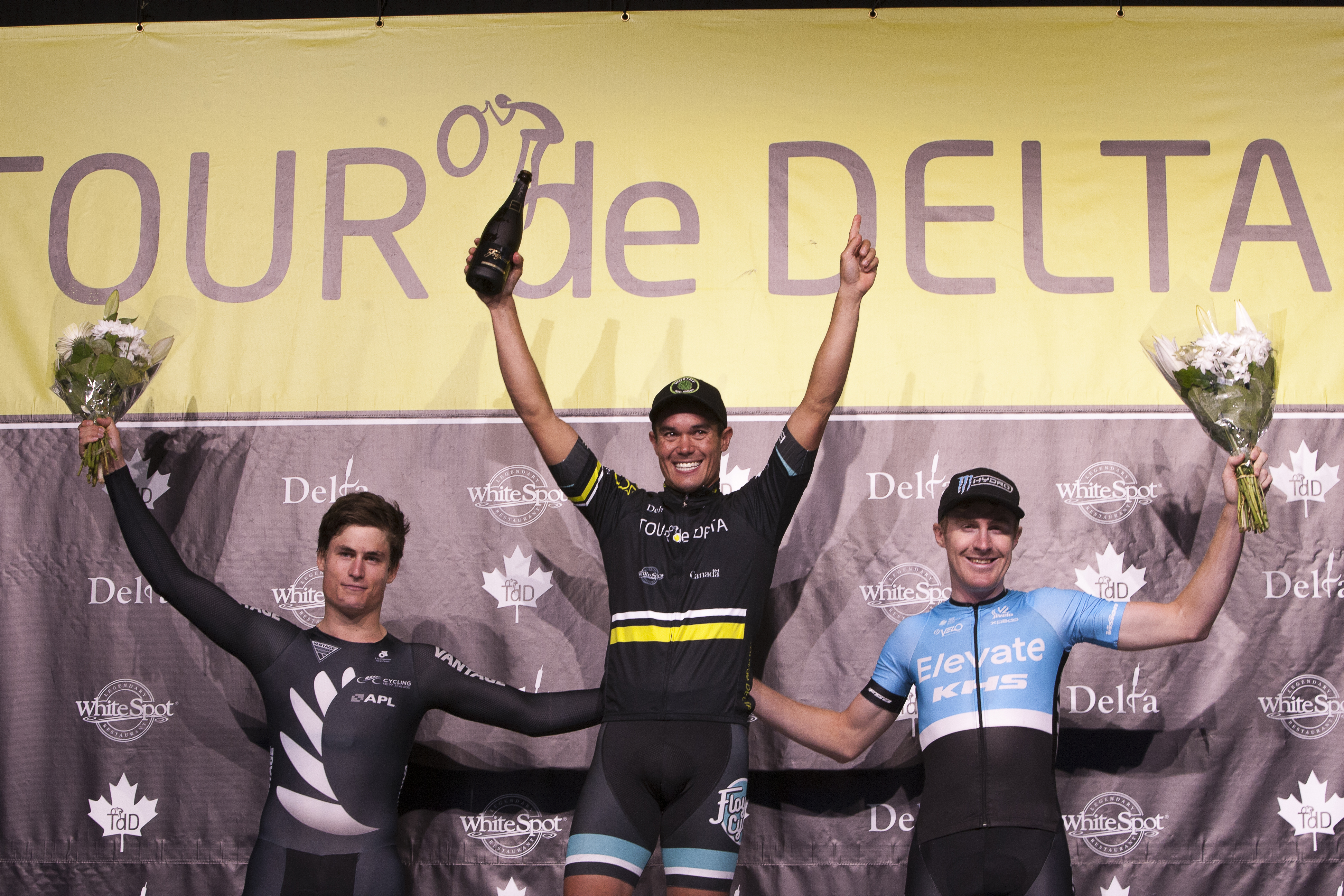 The Tour de Delta Ladner Criterium featured a bit of everything to see in a criterium bike race. The large crowd in the traditional fishing village of Ladner saw a two-rider breakaway which looked like it might stick, thrilling crashes, and an exhilarating sprint to the finish line. At the end of the bedlam, US National Criterium champion Travis McCabe stood tall, edging past Kiwi Campbell Stewart on the last straightaway to claim the title in the 60-lap, 54 kilometre race.

“It was a pretty chaotic race, there were crashes on so many laps, it was a lot of fighting and a lot of hard racing the entire time. The German riders up front were just monsters so I think you saw the strong teams committing – the teams who thought they could win. Us, New Zealand, Elevate-KHS… we timed it to perfection,” the 30-year-old from Denver, Colorado explained. “We’ve got our lead out down, we dialed it in and I think it showed – it was really a pitch perfect race for us. My teammate Emile (Jean) dropped me off in perfect position and I had the legs to finish. It’s great to win here.”

It was a gritty race that saw riders contact each other at times and really attack aggressively to try for the win. It’s something McCabe wasn’t surprised by. “When it comes into the finish, everyone’s going at much higher speeds and not everyone can win, so you have teams like ourselves – I’m the designated sprinter trying to win against five other teams with designated sprinters. It just ends up like one sprint after another sprint after another sprint until there’s no one left.”

Stewart, who is a four-time junior track world champion, stayed clear of the crashes and was quick to throw praise at his teammates for getting him on the podium. “The guys did a great job, we had Tom Sexton and Jordan Kerby on the front all day just dropping off with a few of the other teams. It was a controlled race to a certain extent up at the front, but there was a bit of chaos off the back.”

There were several crashes, including one with 18 laps to go that saw the race stopped. At the time, Ed Veal of Real Deal Racing and independent German rider Leon Echtermann had a breakaway with a 15 second lead. At one point, the gap was as much as 30 seconds. The stoppage may have helped the peloton and halted Veal and Echtermann’s rhythm. “For us it might have been a nice little rest to stop and then go again. It just means we had to think of a different strategy to make sure that we got the rest,” described Campbell. “I know a couple of guys off the front were strong, but we’ve got some diesels here on the team and they worked it out really well, but just couldn’t get on the line.”

In third place was Samuel Bassetti from Elevate-KHS Pro Cycling. It’s the second straight podium for the Santa Rosa, California resident at BC Superweek after he was second in Friday’s Tour de Delta North Delta Criterium to kick off the nine race, ten day series.

Sunday brings the prestigious White Spot | Delta Road Race, which is an opportunity for teams like McCabe’s Floyd’s Pro Cycling squad to gain valuable UCI points. “We came here with the expectation to win, but the road race is a 115 mile race, it’s going to be different tactics,” he said. “For us, we want to give opportunities to all of our riders, we’re not going to ride the front all day because we can’t do that. It’ll be aggressive racing on our side and if it comes down to a sprint, we’ve got me, so it’s sort of a win-win scenario.” 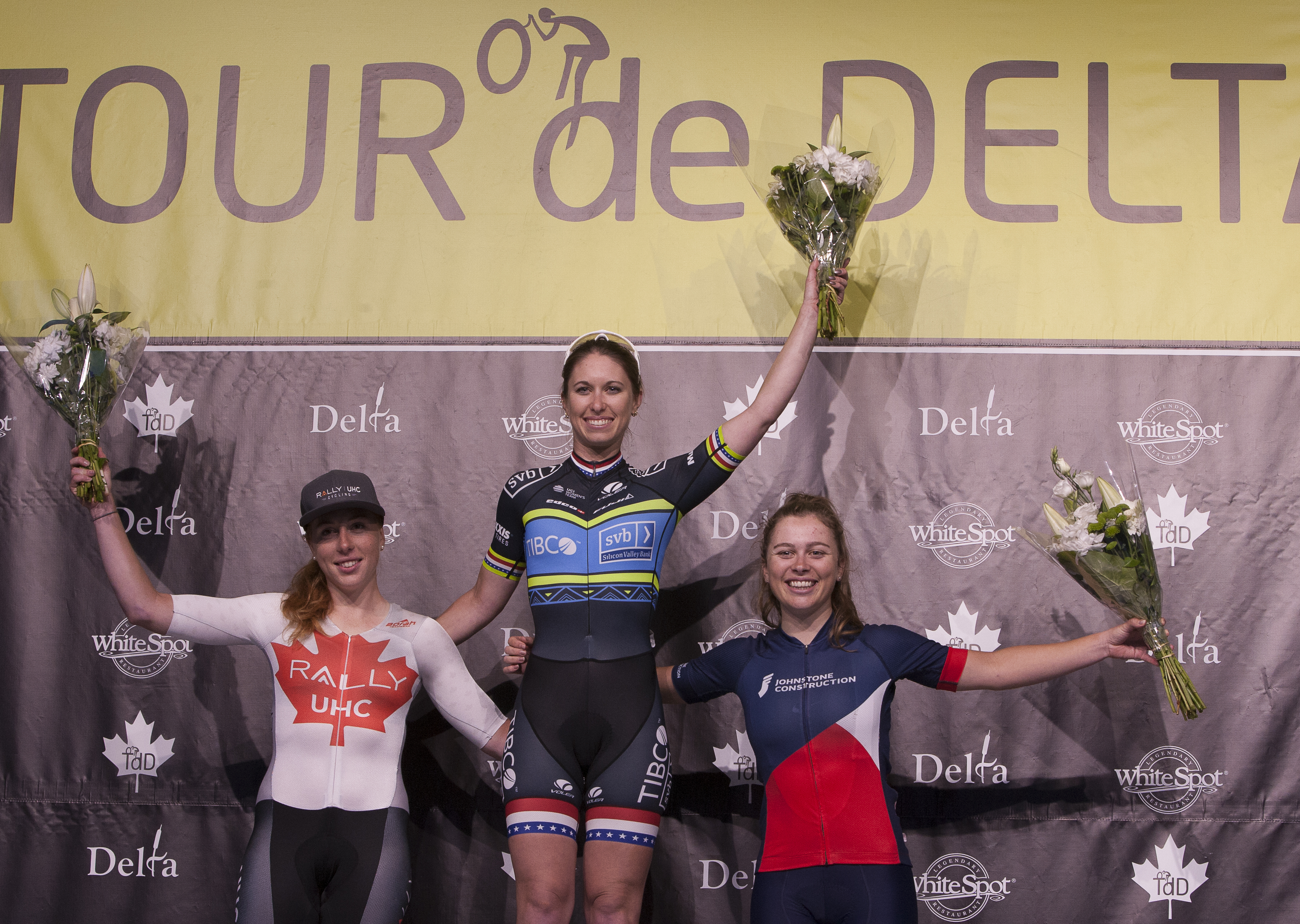 If Kendall Ryan felt any fatigue after flying to Vancouver for BC Superweek, she certainly didn’t show it. The three-time US national champion arrived the afternoon of the Tour de Delta’s Ladner Criterium and decided to give it a go. “I decided ‘What the hell?’, I’m here two hours early and just wanted to hop in with my teammates and have some fun,” said Ryan, who rides for Team TIBCO-Silicon Valley Bank.

Canadian National Criterium Champion Allison Beveridge also made up part of a stacked women’s field and finished second behind Ryan. Her presence was certainly felt by the other riders, despite the Calgary native downplaying the significance of having a target on her back. “I just tried to have some fun out there. There wasn’t a ton of pressure, I kind of sat on the back of Tibco’s lead out,” said Beveridge, who was part of the 2016 Canadian Olympic team in Rio which won bronze in the team pursuit, setting a national record in the process.

Ryan knew all too well that Beveridge would push for a spot on the podium. “Allison is pretty modest, she’s one of the people I was looking out for in the sprint,” the Ventura, California native explained. “I just decided to ride myself into the race and save my legs for the road race, it’s a big one. My teammates just had some fun getting the primes and they led me out flawlessly and all I have to do is thank them.” Ryan won all three races at the Tour de Delta and reached the podium six times during BC Superweek in 2018.

Kiwi rider Georgia Danford came third – and like Beveridge – is also racing BC Superweek without a team. “I was conscious that I was a one-man band without any teammates to help drag stuff back so just in case, I saved a little bit for the end,” said the native of Sadringham, New Zealand. “There were some awesome lead out trains going, I thought I’d just jump on the back of that. It was an awesome race and a lot of fun to be out there.”

Saturday’s race was affected by a large crash a half a lap in as a group of riders misjudged one of the early corners and the race was restarted. It caused the circuit to be shortened from 50 laps to 45 and the distance from 45 kilometres to 40.5. The riders now turn their attention to Sunday’s White Spot | Delta Road Race – it’s big for all the teams. “UCI points on the line for us, we’re always gunning for those,” said Ryan. “It’s one of my favourite courses, really flowy with lots of room for tactics and hard racing. We’re looking forward to it and we’re going to give it our all.”

BC Superweek and the $40,000 Tour de Delta continues Sunday with British Columbia’s only UCI 1.2 road race – the White Spot | Delta Road Race in Tsawwassen. The women race at 9:30 am while the men take the course at 1 pm. Live streaming of the race is available at tourdedelta.ca.