When you take a course that is 13 laps, 151.19 kilometres and combine it with twists and turns through a picturesque beachside community and valuable UCI points on the line, it’s summed up with just one word… ouch.

Anthony broke away from a peloton with two kilometres to go and wound up with a seven second lead in claiming the victory.

“We came here with a really strong team and we were super motivated for the Tour de Delta, it’s a great race and it’s awesome that it’s UCI sanctioned, so it’s a really big goal for our team,” said Anthony. “We came here ready to race, we’ve had an up and down season, but to go out there and race aggressively like that, that’s what I really like to do and what this team is really good at.”

Team Optum had riders near the front of the pack for the entire race, it looked like they were locked into a groove.

“The team was on point all day, we rode at the front, we were aggressive, but I think we rode really smart and brought a really strong team with Ryan Anderson – one of the fastest sprinters here, so it’s always great to have the speed in the field and it lets us race a little bit more abandoned,” continued Anthony.

The race was a bit of a roller coaster with break aways forming and being caught and the peloton changing in size a number of times. Anthony noted that his team relied on previous experience to pull out the win.

“We were communicating a little bit, but we have a really experienced team and it makes a big difference when you get in a race like this when things are constantly shuffling, it’s going back and forth, the groups are coming together and breaking apart, and everyone (on our team) just knows what to do,” he explained. “We were really keying off each other and we were able to see how we were riding and how the other teams were riding, so I think we were all just on point today and that makes a big difference.”

In second place, fellow Optum rider Ryan Anderson of North Vancouver made his second straight podium appearance at this year’s BC Superweek after finishing third in Saturday’s Brenco Criterium. Anderson looked pale and ill during Friday’s MK Delta Lands Criterium and clearly bounced back in the next two races.

“Friday, I just used it as a bit of an opener, I tried racing hard in the beginning and kind of shut down near the end. Saturday was good and today was the ultimate goal and we rode fantastic,” said Anderson, who won the Cannon Falls Road Race and overall title at the North Star Grand Prix three weeks ago.

With five laps to go, Will Routley jumped ahead of the pack for Team Optum and at one point had a 40 second lead, which set the tone for his team the rest of the way.

“From the beginning this morning, we wanted to be all hands on deck with everyone contributing to forcing the move and Will really set up the day for us,” Anderson continued. “He was up there first, he was the first guy to get away, I think it took about 100 k before someone went clear and then when Jesse and I were able to come across and then having an additional rider there, made all the difference in the end.”

Pierrick Naud of Team Garneau-Quebecor was third for the second time in three races at this year’s BC Superweek after finishing in the same spot in Friday’s MK Delta Lands Criterium.

Nigel Ellsay from Range Road Racing out of Saskatchewan took the Men’s U23 title in the race. 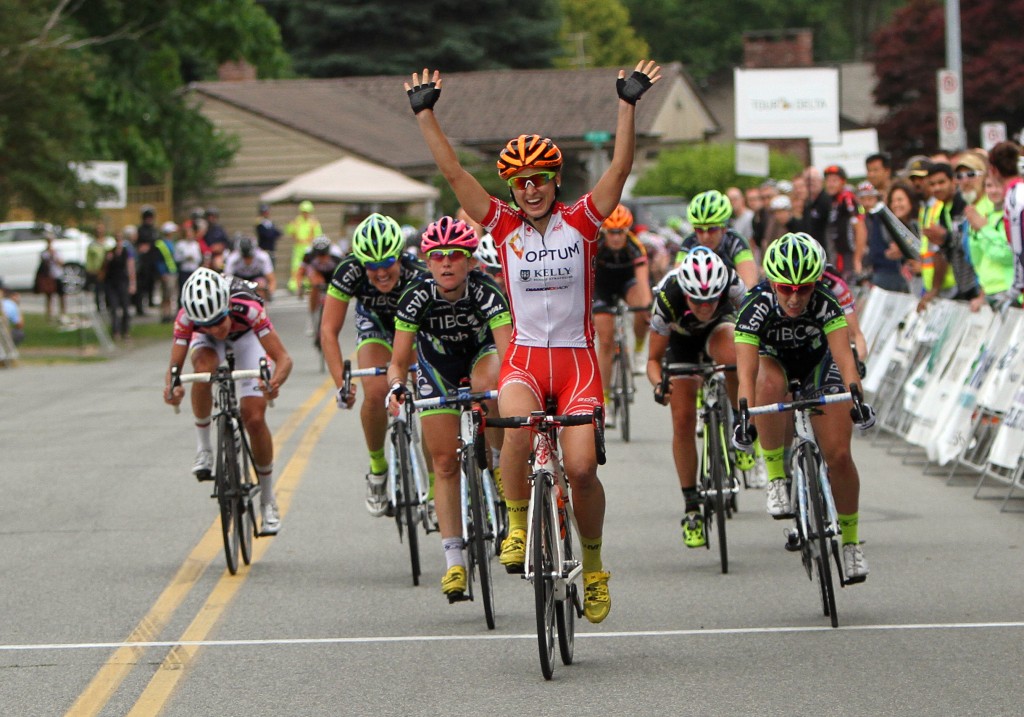 It was an historic day for women’s cycling as the first ever UCI sanctioned road race took place as part of the Tour de Delta. The White Spot | Delta Road Race received the UCI designation last December and saw 59 riders start the eight lap, 93.04 kilometre race on Sunday morning.

Despite the race being a first for women’s cycling in BC, it was a familiar face on top of the podium as Canadian National Champion Leah Kirchmann of Optum p/b Kelly Benefit Strategies emerged from a bunch sprint at the end for the win in two hours, 25 minutes and 8.7 seconds. The Winnipeg native also won the Brenco Criterium on Saturday night.

“I set my hopes high (for BC Superweek), I wanted to win. It’s the first year that it’s a Women’s UCI sanctioned race and that’s a pretty big deal and the team was definitely looking for the win,” Kirchmann said. “I really can’t thank my team enough and it’s great that I have total trust in them. I don’t have to do as much during a race because I know I can rely on them to help control the race and set me up, put me in the best position at the finish line.”

The race appeared pretty tentative for the first few laps, with each of the riders waiting to see who would make the first move, but Kirchmann felt the pressure throughout and tried to reciprocate.

“It was an aggressive race the entire time, people were really trying for a breakaway, really trying to get away from me and the other sprinters, but it came down to a bunch sprint at the end,” she explained. “I did attack about halfway through the race, I put a little dig in the climb and got away solo for a bit, put some pressure on the other teams, forced them to chase, and it was fun being out there by myself.”

The weather was something the riders had to adjust to, as it was raining steadily at the beginning of the race before drying up towards the end.

“It started off raining a little bit and the corners were slick, but luckily it dried up for the finish, which we’re pretty thankful for since the last corners are so technical,” Kirchman continued.

With three straight top five finishes to start this year’s BC Superweek, Kirchmann is on a major roll after winning the Criterium, Road Race and Individual Time Trial at last month’s Canadian National Championships, and she looks to keep it going for the rest of the summer.

“After BC Superweek, we’re heading over to Europe and doing the Women’s Tour de France stage and then I’m going to head over to the Commonwealth Games after that,” the 24-year-old said.

Team TIBCO To The Top showed that they are a force to be reckoned with at BC Superweek as they finished with three of the top five riders at the White Spot | Delta Road Race. In second was Sam Schneider of West Allis, Wisconsin. The 11-time U.S. National Champion in multiple disciplines was just behind Kirchmann. Schneider’s teammate, Lauren Stephens of Dallas, Texas finished third.

18-year-old Maddi Campbell, who’s from New Zealand and races for Real/Deal Gears p/b WASPcam, claimed the Women’s U23 title for the race.

BC Superweek continues with the official Media Conference and Event Launch at UBC Robson Square on Monday at 10 a.m. with all media invited to attend.

The racing continues with the UBC Grand Prix on Tuesday night.