Ladner, BC – His rider profile on the Garneau-Quebecor website says that one of his nicknames is “Sleepy Jase”, but he proved to be anything but sleepy on Saturday night as Jason Lowndes won the 2015 Brenco Criterium in a sprint to the finish line on the final lap. His official time to complete the 60-lap, 54 kilometre race was one hour, 13 minutes, and 25 seconds.

The 21-year-old just edged North Vancouver’s Ryan Anderson of Team Optum p/b Kelly Benefit Strategies and Astellas Cycling Team rider Brandon Feehery to take the victory. The orange helmets of Optum were prominent in the final laps of the race, as it looked like they’d be able to hang on for the win.

“There was a whole Optum lead out train there and they’ve proved to be strong absolutely everywhere, but I was pretty keen to test my ability against them and was pretty surprised to come out on top,” said Lowndes, who’s from Kalgoorlie, Australia. “I’ve been sprinting pretty well this year, so I’m pretty happy.”

The Brenco Criterium is an extremely fast course, which sees riders navigating the tight corners of the downtown core of the historic fishing village of Ladner. The speed of the race was on display especially a quarter of the way through when close to 15 riders were lapped and subsequently withdrawn from the field.

2015 marks the fourth straight year that Anderson has found himself on the podium at the Brenco Criterium, after a third place finish last year along with a second place in 2013 and a win in 2012. The 27-year-old product of the Victoria Academy of Cycling also finished atop the podium at this race in 2009. Anderson was quick to give the credit for this year’s second place finish to his Optum teammates.

“The guys did unreal tonight for me, it was really nice,” he said. “We just were beaten in the finish, but the team was really good tonight.”

Despite the drowsy nickname, Lowndes is excited about what Sunday brings with the White Spot | Delta UCI 1.2 Road Race and is relishing the opportunity to be on top of the podium for the second straight day.

“Tomorrow’s been on my radar for a long time, a flat UCI race… they’re not everywhere so (a first place finish) is a result I’m looking for at the moment,” he said.

Although Anderson knows he’ll need his teammates to be successful in Sunday’s Road Race, a win would be extra special for him on an individual level.

“The road race is one of the stages of the Tour de Delta I haven’t won, so I’d really like to do that tomorrow,” he said, before acknowledging the fans, sponsors, and organizers. “We’re really thankful for everyone coming out, the community and all of Delta. It’s really nice to have this event, and it’s fantastic every year.” 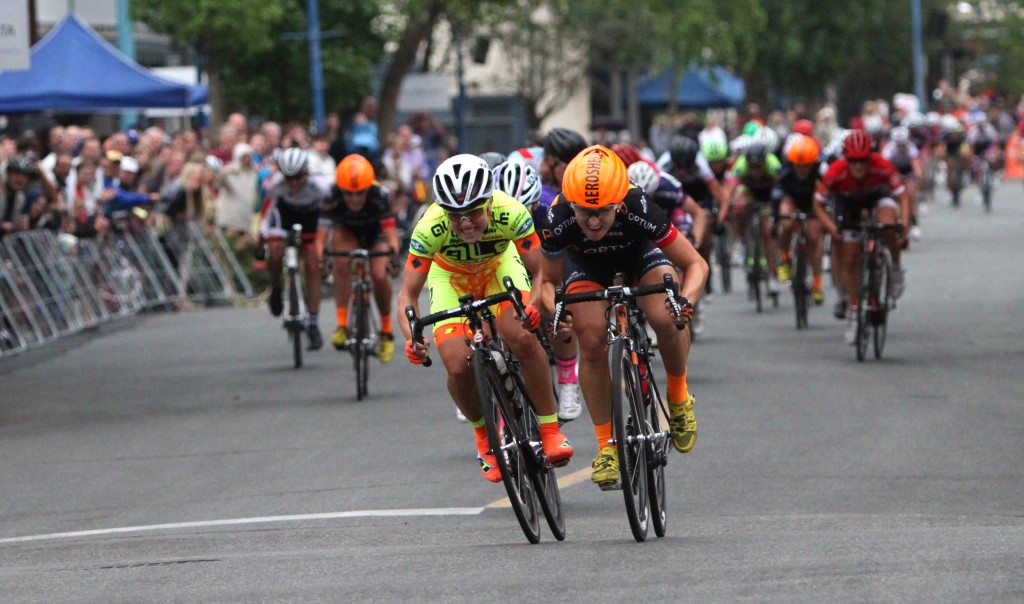 The primes at the Tour de Delta Brenco Criterium are famous across North America, but sprinting for the big bucks wasn’t on the mind of 2015 winner Leah Kirchmann of Optum p/b Kelly Benefit Strategies. The Winnipeg native finished the 40-lap, 36 kilometre race in 56 minutes and five seconds, winning it for the second straight year.

“I knew it was the (final) sprint that counted the most, so I’m happy about that,” said Kirchmann.

On the final lap, Kirchmann was set up well by her Optum teammates Annie Ewart and Lex Albrecht, who claimed the crowd prime.

“It was perfect, Lex was right up there, she got the last prime, (and was) keeping everything together,” said Kirchmann, who is the only woman to win the road race, time trial and criterium at the Canadian Road Championships, which she did in 2014. “Annie just killed it on the last lap, gave me a lead out through that last corner and I had a clean sprint to the line… it was perfect.”

One rider who cleaned up on primes came in second place, Ale Cipollini’s Shelley Olds of Gilroy, California. At one point, she won four primes in a row and finished with six overall. Afterward the race, Olds admitted that going for the primes may have expended too much energy when it came to the final lap.

“I think maybe it did, but it’s all for training,” said the 34-year-old who is using BC Superweek as a tune up for the women’s Tour de France next month. “I want to get as many sprints in as I can here, so it’s all good.”

Finishing third in the sprint was Aussie Lauretta Hanson of Fearless Femme p/b Haute Wheels Racing. Hanson made her BC Superweek debut back in 2013 with a second place finish at the UBC Grand Prix – and the 21-year-old was hooked.

“I love this series and this race in particular,” she expressed. “I wanted to be on the podium with girls as high calibre as Shelley and Leah.”

Her teammate Laura Van Gilder, who’s a veteran of more than 20 years of cycling, set up Hanson with a fantastic lead out at the end.

“She’s an excellent competitor and I wanted to be riding with her this series,” said Hanson of Van Gilder. “She’s come on board with Fearless Femme and we’re hoping to keep the results coming.”

With eight laps to go, the rain that British Columbia has so desperately needed lately started to fall, which changed the already challenging course significantly and made the roads very slick.

“I hasn’t rained here in a long time and when it does, all the oil comes out from the road and I was actually scared at the end of the race,” explained Kirchmann. “I was losing my rear wheel around some of the corners, so I took it pretty chill on the last lap – as chill as you can – and was really careful, just knowing it was really slippery.”

The Tour de Delta wraps up with the White Spot | Delta UCI 1.2 Road Race in Tsawwassen on Sunday, which the women’s field immediately began looking forward to as soon as the Brenco Criterium was in the books. Hanson knows her Fearless Femme team is geared up for the potential to gain UCI points.

“We’ve got some really strong girls, we’ve got Mandy Heintz who’s just coming back from a broken collarbone so we’re hoping to put together some good results and we’re looking forward to it,” she said.

As for Kirchmann, the two-time defending champion at the White Spot | Delta Road Race, she hopes to ride a wave of success right into the women’s Tour de France.

“After the White Spot | Delta Road Race tomorrow, I’m actually heading to Europe with Optum and doing a month-long block of racing over there that will include the La Course by the Tour de France race – I’m excited to return – and we’re also doing the Sparkassen World Cup and the Route de France.”