Fisher is riding for the Hangar 15 Bicycles team and used his powerful sprint to jump ahead of Travis Samuel of the H&R Block Pro Cycling Team and Courtney, BC’s Nigel Ellsay, who rides for Silber Pro Cycling. Hangar 15 was one of the larger teams in the race, and they played it to their advantage as Fisher finished the 134-kilometre trek in three hours, 30 minutes, and seven seconds.

“We really had a lot of cards to play today, we just wanted to make the race hard and hopefully came out on top with the numbers in the front group late in the race and it panned out for us,” he said. “I was definitely hurting on the climbs a little bit. Nigel put in some pretty good digs and I think it put us on the back foot, I just knew I had to hang on until the last corner before the finish.”

Langlois Brown’s Dylan Davies broke away with eleven laps to go and the other teams were well aware of the cyclist who began his cycling career as a bike messenger while attending college in Vancouver.

“There were four guys behind Dylan and we had Kaler Marshall in that group,” explained Fisher. “Then Francisco Mancebo and I came across in a pretty big group on the steeper climb. It took us a while to get up there, once we did, everyone kind of set about working to bring Dylan back and he was right in his prime, it took us a long time.”

The H&R Block Pro Cycling Team is back on the podium at the Tour de White Rock after Garrett McLeod won the road race two years ago. H&R Block had big numbers in the field as well, with eight riders taking to the start line. Following a seventh place finish in the Choices Markets Criterium on Saturday, Samuel knew he was in contention for the omnium.

“Going in I was seventh overall, so I knew I had extra points on most of the guys. Our goal was with the numbers, just put Silber and Canyon under pressure all day,” said Samuel, a multi-sport athlete who has competed in hockey, soccer, basketball, and triathlon. “Every time Nigel, or Steve, and Mancebo had to follow moves, it was one less match that I had to burn early on in the race, but it helped me at the end.”

Despite mostly racing in the Pacific Northwest, Fisher’s exploits on the road are well documented, and Samuel was aware of his strength as a sprinter.

“I knew if it came down to a sprint with Steve it was going to be tight, but I think he got an upper hand on me, so coming over the last climb, the guys started playing cat and mouse and I hit them there going into the descent hoping that I could have ten or 20 bike lengths on them going into the corner,” described Samuel. “Unfortunately, Steve got back through the corner and he had prime position.”

Ellsay made it onto the podium for the first time at BC Superweek this year with the third place finish. The 23-year-old represented Canada twice – at the World Championships as a junior rider in 2012 and as a U23 rider in 2015. His game plan for Sunday’s road race was to try and get away, riding aggressive once the peloton broke up.

“I did what I could, but it wasn’t quite enough today. On that last lap, Steve, Travis and I were just riding, no one wanted to go. I hit it once or twice on the climb, couldn’t get much of a gap and it was just a sprint for the finish. Props to them, Steve is super strong, a great sprint, and it’s great to see Travis up there too.” 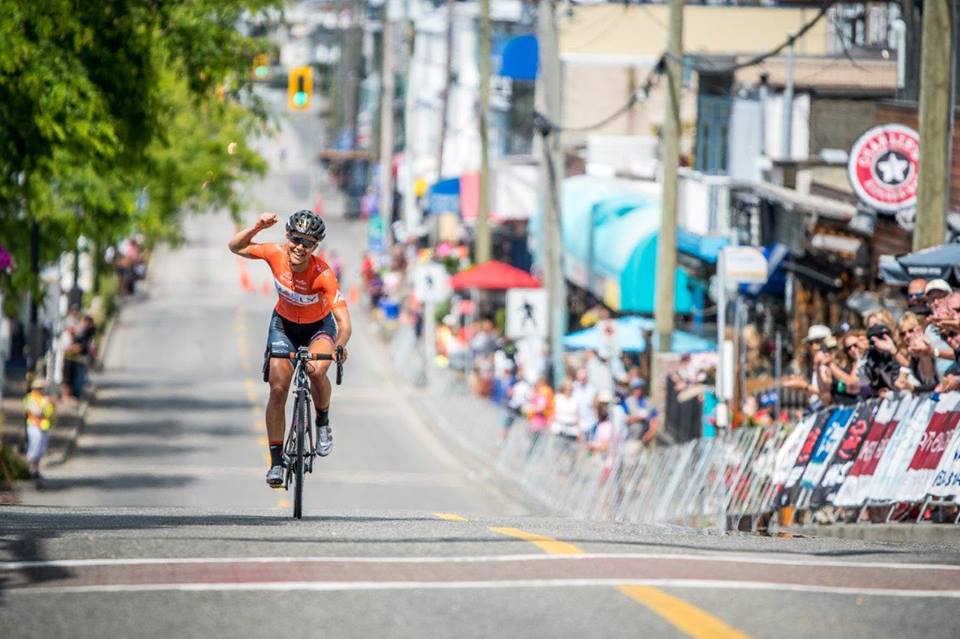 Kirsti Lay took a break after riding five races in six days to start BC Superweek and it seems the rest paid off. The 2015 Pan-Am team pursuit gold medalist broke away to solo victory in the Peace Arch News Road Race on Sunday, finishing the nearly 81-kilometre grind in two hours, 25 minutes, and 48 seconds. The course and its gorgeous backdrop attracted Lay to give it a go to wrap up her time at BC Superweek.

“It feels pretty amazing, this course is really fun, and it never really lets up so I for sure wanted to give it a shot,” the Montreal native said. “It worked perfectly in my preparation for Cascade next week. It was a really great race and awesome to finish this way at BC Superweek.”

22-year-old Margot Clyne went on a break just three laps into the grueling race, and it looked like she might make it stick, until Lay and 2012 Canadian Olympian Joelle Numainville reeled her in.

“Margot really put in an amazing effort and it took a while for us to catch her. We knew with under four to go we really had to put the pressure on or else she was going to really get away. We jumped on the Columbia hill, and Joelle and I worked together quite well. She’s super strong so I was pretty excited to get away with her,” explained Lay, who ended up winning three of BC Superweek’s nine races this year. “Then last lap, I just jumped when I saw Margot at the top of the climb and I was able to get a gap on Joelle and from there just brought it home. I didn’t want to leave it to the last climb in case it was a little hard to get away, so I just tried to place my bets on it.”

Clyne is from Boulder, Colorado, but moved to Vancouver to attend the University of British Columbia. She graduated this past May with a Bachelor of Science in Math and a minor in Atmospheric Sciences with plans to get her PhD in Climate Dynamics. She placed third at the 2016 USA Hill Climb National Championships and was the 2016 Colorado State Road Champion.

“I’ve been with the UBC Cycling Team for the last couple of years. I really thank them a lot for that, collegiate cycling’s done a lot for me and it’s great to see the team grow. It’s amazing to race in this field, I’m very new to this field and the women here are absolutely incredible,” the 22-year-old said. “BC Superweek’s been an amazing opportunity to learn from these women and race with them. Joelle and Kirsti, they’re fantastic riders and it’s been great to go head-to-head with them all week.”

Being from the high altitudes of Colorado, the expectation would be that Clyne likes to climb – and that expectation is correct – she’s a climber by nature.

“I like attacking on the climbs, but this week, it’s been just attack, attack, and attack to see what will stick. I’ve had a lot of digs this week and I don’t think that was anything new to the field who’s been here all week. Today, it finally stuck and finally was able to have my race,” she said.

Numainville, a three-time Canadian National Road Race Champion, had a top-10 finish at each BC Superweek race she started this year after her third place finish in White Rock on Sunday, including top-five placings at the Ladner Criterium as part of the Tour de Delta and the Global Relay Gastown Grand Prix. Her results in the Choices Markets Criterium on Saturday and in the Road Race on Sunday earned her the Tour de White Rock Women’s Omnium.