Local BC Riders Sweep the Podium in the Women’s Race

After finishing the steep 700-metre, 16 percent grade ascent up Buena Vista Avenue in first place, Etzl had to excuse himself from his post-race interview with the stage announcers because he became physically ill. However, it didn’t put any damper on the 19-year-old’s celebration though, as he won the event for the second straight year. Being the defending champion gave Etzl a chance to have a bit of a leg up on the first-time riders.

“I knew what to do and when to go on the hill. Having the experience of the five man group up the hill was definitely beneficial to my race,” he said.

Etzl definitely had this race circled on his calendar as he lists in his bio on the Team Jet Fuel Coffee/Norco Bicycles website that one of his goals for 2014 was to defend his title here. He says that the final heat was pretty tactical.

“Two other riders went pretty hard at the beginning and I just kind of sat up, knowing that last year, people went really hard at the beginning and we flew past them at the top,” he explained. “(This year), I just sat back and played cat-and-mouse, took some wheels and then hit it really hard a little too early at the bottom of the steep part of the hill, but it worked out for me.”

There was also a familiar face in second place, as 2012 winner Florenz Knauer came in just behind Etzl. Knauer, who races for Team Heizomat out of Germany, has been on the podium at this race for three straight years, including a victory in 2012. He also cited his previous experience at the Tour de White Rock Hill Climb as paying dividends.

“You have to be tactical the whole climb and if you give too much the first time, you don’t have enough energy the second time,” the 25-year-old said.

24-year-old Cody Canning, who rides for Victoria-based Russ Hay’s/Accent Inns p/b Scotiabank, came third. He hopes the podium finish is a spring board to better things.

“So far this week, it’s definitely my best (performance). I had a little trouble finding my rhythm in the criteriums, but we still have (the rest of) White Rock to go, so I’ll see if I can find some rhythm now,” the Victoria native by way of Edmonton noted. “BC Superweek is BC’s best racing of the year, so you’ve gotta get out and support it and try and do as well as you can with all the pros and all the best riders from around Canada that are out to compete against. It’s a fantastic week of bike racing for us.”

Other riders making it into the top five and claiming a chunk of the prize money were Sebastian Molano from Team Colombia in fourth and Team H&R Block’s Garrett McLeod of Wolfville, Nova Scotia, who was fifth. 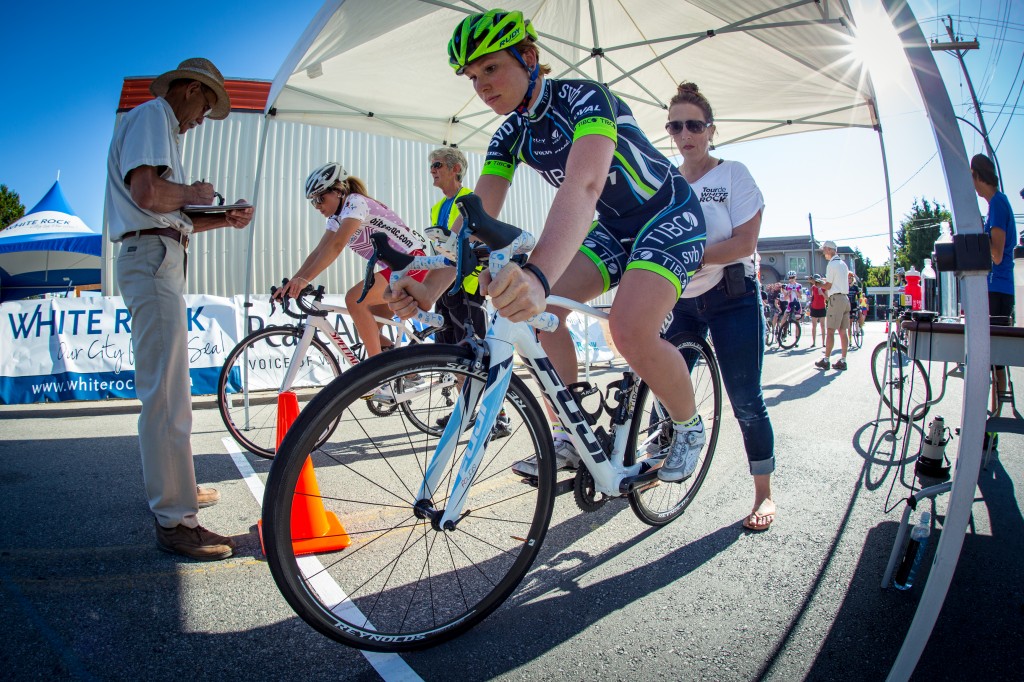 BC riders represented their province well in the first stage of the Tour de White Rock on Friday night during the Homelife Realty Hill Climb as four of the top five riders in the final heat list BC communities as their hometown.

In the end, it was Abbotsford’s Alison Jackson of Team Glotman Simpson Cycling out of Vancouver finishing ahead of the field to claim the grueling event. It’s her second podium at BC Superweek, after she was second at the MK Delta Lands Criterium one week ago.

Jackson acknowledged what a challenge the Hill Climb is, saying it’s all about effort and having a solid strategy. The 25-year-old, who is a student at Trinity Western University in Langley, is a multi-sport athlete, which likely helped her in this race. She’s competed for Team Canada in triathlon and cross country running and also runs competitively for TWU.

Jenny Lehmann, who rides for the local Trek Red Truck Racing team, came second and the podium is a familiar place for her. The Kamloops product was third in the Tour de Delta omnium in 2012 and also won the 2011 GranFondo Whistler. In addition, she was the BC Road Race Champion in 2012.

Riding for Langley-based ATAC Sportswear, Megan Rathwell finished third. In 2012, the Victoria native was fourth at the Homelife Realty Hill Climb and third at the Peace Arch News Road Race as part of the Tour de White Rock.

The 35th Annual Tour de White Rock continues on Saturday with the Choices Market Criterium and wraps up with the Peace Arch Road Race Sunday.