In his biography on the Elevate-KHS Pro Cycling website, Samuel Bassetti lists his favourite quote as “No excuses, play like a champion”. And after two days of just missing the top step of the podium at BC Superweek and the Tour de Delta, the 28-year-old played like a champion to win the 2019 White Spot | Delta Road Race. Bassetti just managed to edge Langlois Brown rider Kaler Marshall to take the victory and the valuable UCI points to go along with it.

With eight laps to go in the 12-lap, 155.46 kilometre race, Team Canada rider Jack Burke and Evan Burtnik of XSpeed United Continental broke away from the group. The two built the gap up to 50 seconds with 7.5 laps remaining, but that’s when Burtnik crashed and Burke found himself caught by the peloton with seven to go. A strong group of seven riders broke away with 6.5 laps left before another seven caught up to them and the pack couldn’t bridge across – so with six to go and barring a catastophe, it was clear who the top 15 riders would be.

“Travis McCabe, Pier-Andre Cote and I were all kind of at the back of the breakaway hanging out with each other,” said Bassetti. “The finish came up pretty fast, suddenly it was 200 metres to go and the guys up front hadn’t started sprinting. I started my sprint, weaved through the rest of the group and just nipped a couple guys at the line.”

The break had three riders from Floyd’s Pro Cycling, so it looked like they might pull out the win, but Bassetti had his teammate George Simpson with him putting in some work. “It was super good to have George there, but it was kind of up to the Floyd’s riders to make sure it was together for McCabe to sprint because he was definitely the favourite in the group,” he explained. “It was pretty cohesive for the most part, so we just rolled all day and closed it out there at the end.”

For Marshall, it’s the Walla Walla, Washington native’s second straight runner-up spot at the White Spot | Delta Road Race after he finished behind Adam deVos a year ago. “Normally I don’t like bunch sprints but with a diminished group I figured if I could go within 400 metres I could get a gap and surprise them, so that’s what I tried,” said the 33-year-old. “I could sense Bassetti coming up on my left side, I knew as long as I could get my bike in front of him, then maybe I could make it – but it was a little bit of a long shot in the end.”

In third was Florenz Knauer riding for the German National Team. Knauer has had multiple podiums at BC Superweek over the years but remarkably has never finished in the top three in the race in Tsawwassen – and he almost didn’t make it through the last 250 metres of the course this year. “I cramped up right away when I jumped for the sprint and didn’t have the power there that I would need to win, but it was a close one,” said Knauer, who was on the podium seven times at BC Superweek last year. “I didn’t see Sam or Kaler, they were behind me and I think they took my wheel. I focused on Campbell Stewart because I knew he was strong and then I saw Kaler going and saw 250 metres to go so I knew I had to go then.”

The 30-year-old kept expectations low coming into BC Superweek this year after dealing with illness and a nagging knee injury. “I’m just happy to be here, I had knee problems and was sick recently,” said Knauer. “I’ve been training for three weeks now and racing, so I’m doing better than expected and I’m just happy to be part of BC Superweek, it’s always been a pleasure for me to be here.”

Bassetti has struggled with injuries himself in the first half of 2019, and the win is a major redemption. “It’s huge for me, at the beginning of the year I didn’t get to train for two and a half months so to come back and get a really solid win like this is really big for me and really big for Elevate-KHS.” 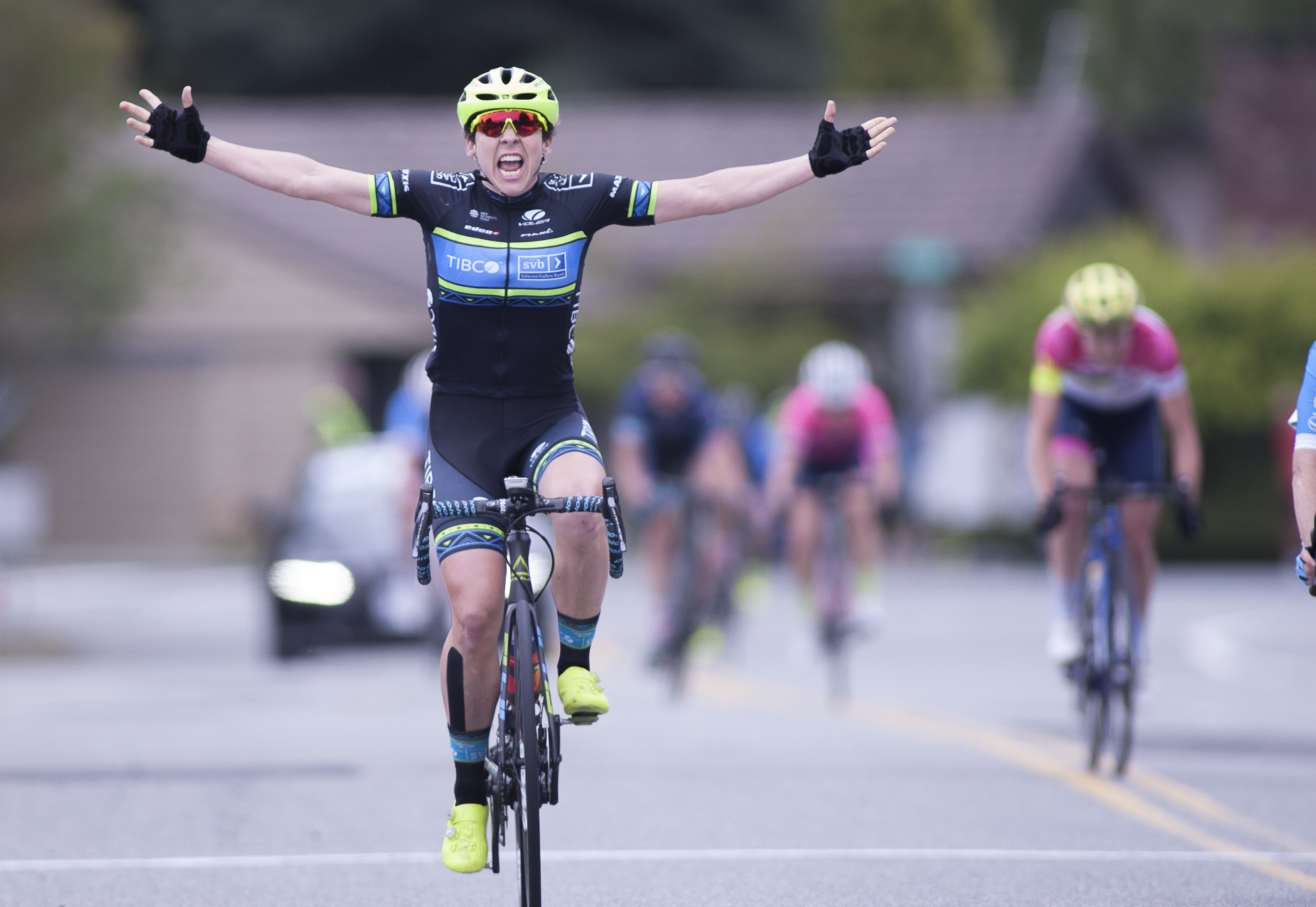 The White Spot | Delta Road Race has come down to a bunch sprint in recent years, but during Sunday’s women’s race, Olivia Baril from Team Macogep Tornatech Specialized p/b Mazda decided that she wanted to try and win the race early. The 21-year-old went away on the second half of the first lap and at one point had a 20 second gap but wound up being caught halfway through the third lap. However, it was that attack that caused a 12-rider break featuring some of the strongest riders in the field.

Among those riders was Team TIBCO-Silicon Valley Bank’s Alison Jackson of Vermillion, Alberta, who won the eight lap, 103.6 kilometre race in two hours, 38 minutes and 15 seconds, sprinting ahead of fellow Canadian Marie-Soleil Blais and Portland, Oregon’s Starla Teddergreen. “This is my first win of the season and to win in Canada is special,” said Jackson, who finished third in the race in 2016. “I’ve wanted to win this race for several years now. I’ve been on the podium and my teammate Kendall Ryan won it last year, so we had to defend.”

Ryan was looking for a third straight win at the White Spot | Delta Road Race and ended up being tenth. Jackson knew that if the peloton caught the breakaway, Ryan would likely come out with the win. “For us, if the group came back together, Kendall was going to win it – we had 100 percent confidence in that,” explained the 30-year-old Jackson, who was the 2015 Canadian National Criterium Champion. “There were some other girls in the break who I think the odds for them were better if it stayed away… Hagens Berman had three people in it and they kept rolling to keep it away. We thought if it was going to stay away, we were going to keep me fresh for the final.”

The gap between the break and the peloton was as much as 70 seconds at one point during the race, a difference that ended up being too much to make up. Second place finisher Blais, who was riding for Team Canada, was part of the break the entire time. “In the beginning, we had two riders and Hagens Berman had four, so the responsibility was mostly on them to make it work. It wasn’t a bad situation in the sense that Kendall was in the bunch, so we had a good chance at the podium,” the Montreal native said. “We just rode it and the last kilometre got a bit chaotic, there was a crash, then someone attacked – so the sprint finish wasn’t as straightforward as I would have hoped, but that’s rarely the case anyway.”

Blais has raced the White Spot | Delta Road Race four times before, with this being her best result. “I think I’ve progressed every year and to finally be on the podium – even though I’m kind of bummed to not win – it’s still really nice,” she said, noting that she really likes the course. “There are a lot of turns, it’s never boring. The turns make it harder so you must always be conscious of your positioning because it can be kind of up and down like a yo-yo. I like that it’s very interesting – it’s a cool course.”

For Jackson, winning on home soil is big for the former elite cross-country star. “It’s hard winning a bike race, whether it’s in Europe or America or here… so whenever you get a win, you’ve got to savour it – that’s what this is for me,” added Jackson, who graduated from Langley’s Trinity Western University with a degree in kinesiology in 2014.

BC Superweek sees a rest day on Monday and continues Tuesday with the New West Grand Prix. The women race at 6:15 pm while the men take the course at 7:30 pm.