White Rock, BC – On a day when the world had its collective eyes on Brazil for the World Cup final between Germany and Argentina, there’s plenty to celebrate for Canada as men from the home and native land finished 1-2-3 at the 2014 Tour de White Rock Peace Arch News Road Race.

In first was Matteo Del-Cin, who rides for the Silber Pro Cycling Team out of Montreal, completing the grueling 134 kilometre race in three hours, 23 minutes, and 25 seconds. For Del-Cin, it’s his first trip to ride BC Superweek, and it couldn’t have ended on a better note.

“It feels fantastic, I really love the course. I was really aggressive all day to try and make something happen. The team rode fantastic, we were all over the moves all day, so couldn’t feel any better,” he said.

With four laps to go, Del-Cin went for it and jumped ahead of the pack of four which had broken away from the peloton.

“It was a pretty big relief when (our Director) Gord (Fraser) was yelling to me on the hill that (teammate) Derrick (St-John) was coming up because we had another card to play,” the 23-year-old from Ottawa explained. “On the next lap I made a move because I figured there’d be some hesitation and I got a little gap and Derrick did an amazing team ride covering all the moves, trying to cross me.”

Second place went to Pierrick Naud of Team Garneau-Quebecor, as he was able to sprint across the finish line 1.8 seconds behind Del-Cin, but just ahead of Team H&R Block’s Garrett McLeod and Team Heizomat’s Fabian Schormair. Naud was aware of Team Silber having two riders in the top five heading into the final few laps of the race.

“I was feeling strong and when I saw Derrick St-John coming back on us with four laps to go, I was worried a little bit because I knew there were be two Silber pros, so it would be more complicated for me. I tried something with two laps to go with Matteo and he put the counterattack in the climb and no one responded,” said Naud.

McLeod and the rest of the breakaway realized before the bell lap that the race was probably going to go Del-Cin.

“It was down to the four of us, but then Silber did a great job getting a second guy across to that lead group and then Matteo managed to get away with two laps to go and the rest of us just kind of looked at each other and that was it,” the Wolfville, Nova Scotia product said. “There was some communication between us three, but there wasn’t a lot of serious chasing going on, it kind of turned into a race for second pretty quickly.”

Despite not getting on the podium at the Tour de White Rock Road Race until this year, McLeod is still a big fan of the course.

“I love it, I’ve been racing here for a couple of years now and it’s always one of my favourite races of the year. It suits my abilities pretty well and I’ve never gotten on the podium before, but I always knew I could and I’m happy to at least do that today.”

For the 23-year-old Naud, it’s his second podium appearance at BC Superweek, after he was third at last Friday’s MK Delta Lands Criterium. The Montreal native had never raced BC Superweek prior to this year, but was definitely impressed with the series.

“It was really nice, with a lot of crits. I really enjoy criteriums, so it was good for me.”

Germany’s Florenz Knauer of Team Heizomat won a sprint for seventh place to take the men’s omnium, or overall title, for the Tour de White Rock. 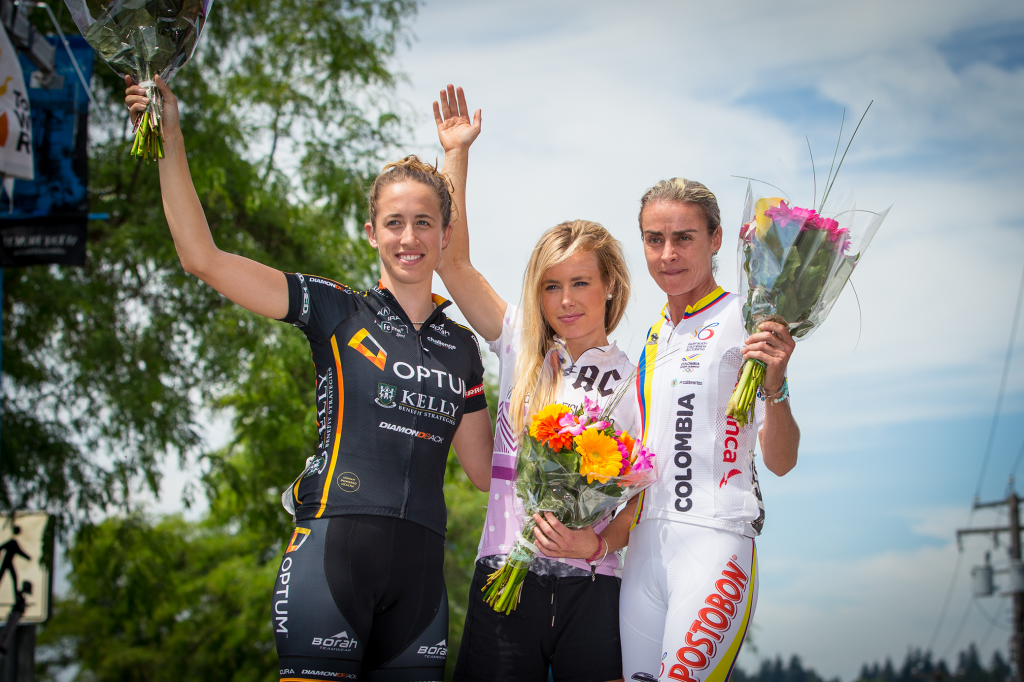 Just over an hour before Matteo Del-Cin crossed the finish line to take the men’s title at the Tour de White Rock Peace Arch News Road Race, the women’s field provided an exciting finish as well, as the top four to cross the line were all within four-tenths of a second of each other.

Ultimately, it was Victoria’s Megan Rathwell, who races for ATAC Sportswear, coming out on top with a time of two hours, 28 minutes and 23 seconds to complete the eight lap, 80 kilometre course. After riding for as long as they did in 30-plus degree heat, Rathwell was a bit surprised that the finish came down to a sprint.

On the last lap, it appeared that Rathwell jumped across and separated herself from the breakaway group of four.

“I’m not really a sprinter, but it kind of suits me, the uphills, so I guess it was okay,” she said about the difficult ascent up Magdalen Hill. “Anika (Todd) was actually telling me that I could get up there because I could see the pack and she was really encouraging me and it’s all mental, so I just put in a hard dig and we could see them and then she just took it on the descent and brought me back up and it was just like a perfect line.”

Todd, who finished fourth riding for Team TIBCO To The Top, was an inspiration to her friend and fellow Victorian Rathwell.

“I love White Rock, I love this race, it’s really well put on, the course is really tough and I like that. I think there’s not a lot of races like that around here, with lots of climbs. It’s great for people who are small and like to climb, not the sprinters all the time,” Rathwell continued. “Alison (Jackson) is really strong, I couldn’t stay with her when she was going and then luckily Anika just pulled me back on the descent, she was just descending like crazy so it was nice for me, she really helped me out.”

In second place, with her fourth podium appearance of BC Superweek, was Vancouver’s Denise Ramsden of Team Optum p/b Kelly Benefit Strategies. She won the MK Delta Lands Criterium eight days ago and was second at Saturday’s Choices Markets Criterium and eight days ago at the Brenco Criterium in Ladner. Coming third was Team Colombia’s Maria Luisa Calle.

“It’s awesome, this was one of my main goals this year, to win this race,” an ecstatic Rathwell added. “I don’t do a lot of racing, I just race locally so I’m really happy to come here and win, it was really important to me.”

“I probably went a little early, but the hills are kinda my thing and no one came. I was just hoping that the rest of them wouldn’t be smart enough to get it together to come catch,” said Jackson. “Then I was able to rest a little at the end with Denise (Ramsden) and the one Colombian rider, and just didn’t play my tactics right at the end there, so a little disappointing because I was really looking for the win, but I’m happy to get the overall.”