North Delta, BC – For the third straight year, the familiar orange jersey of Silber Pro Cycling was atop the podium to open BC Superweek with the MK Delta Lands Criterium, but the rider wearing the jersey was different than last year and in 2014.

With Silber veteran Ryan Roth looking to three-peat at the race, it was his teammate Elliot Doyle of Laval, Quebec who was able to surge ahead of the pack to claim first place. Roth crossed the finish line in 19th place, but clapped jubilantly as he did, knowing his team had shown so well once again in North Delta.

“It’s my third year at BC Superweek, and last year I finished fifth two times and fourth two times, to win this race in front of some of the great cyclists is perfect,” said an emotional Doyle following the race.

The riders did a 55 minute timed race plus five laps, and it took until the last lap and a bunch sprint to decide the win. With a powerful lead out during the last five laps, it looked like Minneapolis, Minnesota-based Rally Cycling would end up on the podium, but the Silber train had a plan to wait behind Rally in case it came down to a sprint, and it did.

“Our idea was to lead out as late as possible, with Ryan (Roth), Kris (Dahl), and me, so we executed the plan perfectly,” explained Doyle.

In second was Florenz Knauer, who’s from Germany, but listed his hometown as Delta on his registration for BC Superweek. The 27-year-old has made multiple podium appearances at BC Superweek since first coming to ride the series in 2012.

“It’s special for me because in my first year, I met my girlfriend here. Since 2013, we’ve been together and in September, I’m looking to move here to make it serious,” laughed Knauer.

As for the race, he used his previous four years of experience in Delta strategically, riding specifically in the last few laps, anticipating a bunch sprint.

“I thought it would be a group because the last two or three years, it was always a group and I looked at some riders who I would go with if they were in the group, but they didn’t make the move, so I sat on.”

Without a team at BC Superweek to support him, Knauer knew he would have to dig.

“My tactic was hanging on… I did the first prime, then I had a bit of trouble hanging in, but in the end, I always know I do quite well on the uphill sprint (on this course)… the only problem was I had something like a 20 metre gap to close with the front guys,” he said. “I am very happy with second place.”

Silber Pro Cycling claimed two of the three spots on the podium as Calgary’s Kris Dahl came third. The 23-year-old had two podium appearances at BC Superweek last year, finishing 2nd at both the UBC Grand Prix and the Giro di Burnaby. 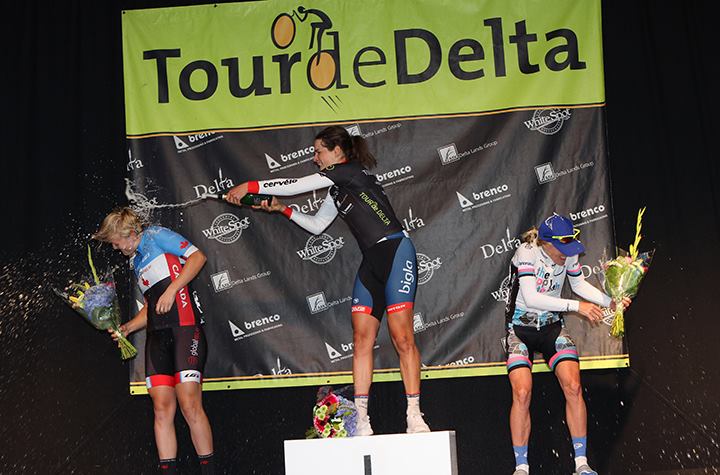 It’s been a few years since Joelle Numainville of the Cervelo Bigla Pro Cycling Team raced at BC Superweek, but on Friday, she showed that she’s a force to be reckoned with as she sprinted to win the 2016 MK Delta Lands Criterium to kick off the Tour de Delta.

Using a timed format that saw the riders complete as many laps of the 1.2 kilometre race loop as they could in 50 minutes plus five laps, the tactics of most riders were pretty conservative until those final five laps when attacks and moves became more aggressive. For Numainville, who’s from Laval, Quebec, she finished just ahead of Vancouver’s Stephanie Roorda (Team Canada) and Bountiful, Utah’s Tina Pic (The Happy Tooth Pro Cycling).

Numainville represented Canada at the 2012 London Summer Olympics, finishing 12th in the road race, and is looking at riding the Tour de Delta and BC Superweek as a way to stay sharp – and if the results come, then so be it.

“I have to be honest, I just came here to make the most of it. I’m training pretty hard, I trained this morning and came out here to do my last training of the day, and I just want to race pretty hard. I really enjoy being here (in BC),” said the 28-year-old. “I just wanted to come here and race the best I could and give all I had. I’m in good shape, so I just want to have fun, I like coming to BC and seeing the crowds. It’s been a long time since I’ve been here, so I really enjoy it.”

Roorda, who is the Canadian Women’s Team Pursuit Record holder, is no stranger to being on the podium, as she won a bronze medal for Canada at the 2015 UCI Track Cycling World Championships. She notes that track cycling is her preferred event, although road racing seemed to agree with her on Friday, and the course at the MK Delta Lands Criterium was a fun challenge that appears easier than it actually is.

“It seems like it’s pretty simple and straightforward, but it’s really gruelling tactically with the hill there,” said the 29-year-old Roorda, who was very aware on the last few laps of which riders were around her. “Oh definitely, I was just trying to watch everyone, looking around a lot to see how everyone wanted to race and go from there.”

Pic finished third and at the age of 50, brings a winning pedigree to BC Superweek once again this year. She is a six time U.S. National Criterium Champion and a four time USA Cycling National Racing Calendar Points Champion. Pic had four top ten finishes at BC Superweek in 2015, including fourth place at both the Global Relay Gastown Grand Prix and the Giro di Burnaby.