Rally Cycling’s Eric Young calls BC Superweek and the Tour de Delta home turf for the powerhouse Canadian teams, but with the amount of victories and podium appearances he’s racked up over the years, he might as well claim home field advantage too. On Friday night, Young sprinted ahead of German rider Florenz Knauer to win the North Delta Criterium for the second straight year in front of a raucous crowd in the social heart of North Delta.

Young and teammate Brad Huff were the only two Rally Cycling riders in the race, and they felt the pressure from teams like Silber, which had Ryan Roth win this race in 2014 and 2015, as well as two riders on the podium in 2016. As the race progressed, it looked like it would come down to a bunch sprint on the final lap, and it did.

“Brad and I were just trying to hide as best we could. It went super well, we weren’t sure if it was going to stay together or not. The Silber team seemed like they were content with having everybody together so there were a few moves that they were in where we had to react, we just played off them the best we could because they seem like the best team here so far,” explained Young, who finished the 45 lap, 54 kilometre race in one hour, 11 minutes, and one second. Huff found himself as much of a spectator as those in attendance heading into the final corner as Young and Knauer went to work.

“My plan was to take Eric up to the front, but the Silber team did an amazing job, they’re the ones who want to control it. Florenz came around everybody with momentum, Eric was the second guy to react, I was third and it almost stayed that way to the finish. Eric overcame him in the final turn and both those guys on the podium, first and second, are phenomenal sprinters so it was pretty cool to watch it happen in front of me,” said Huff.

Knauer was looking for his first win in the North Delta Criterium after six straight top-6 finishes, but the top of the podium eluded the German once again at this race, despite his aggressive effort on the final lap.
“Florenz had a really great effort on the climb, he went straight from the bottom and went super hard. Then he started fading because he went so far, and I was able to come around before the last corner,” said Young, who won the US National Criterium Championships in both 2011 and 2013 and is a huge fan of BC Superweek. “We’re really happy to be up here, this is one of our favourite weeks of racing, it’s such a great race – the whole community gets behind it.”

As BC Superweek rolls on, Young looks to join Ron Hayman, Gina Grain and Verna Buhler as the only cyclists to win the Global Relay Gastown Grand Prix three times after he won it in 2016 and 2017. If the North Delta Criterium and the start of this year’s BC Superweek series is any indication, encore performances might just be Young’s specialty. 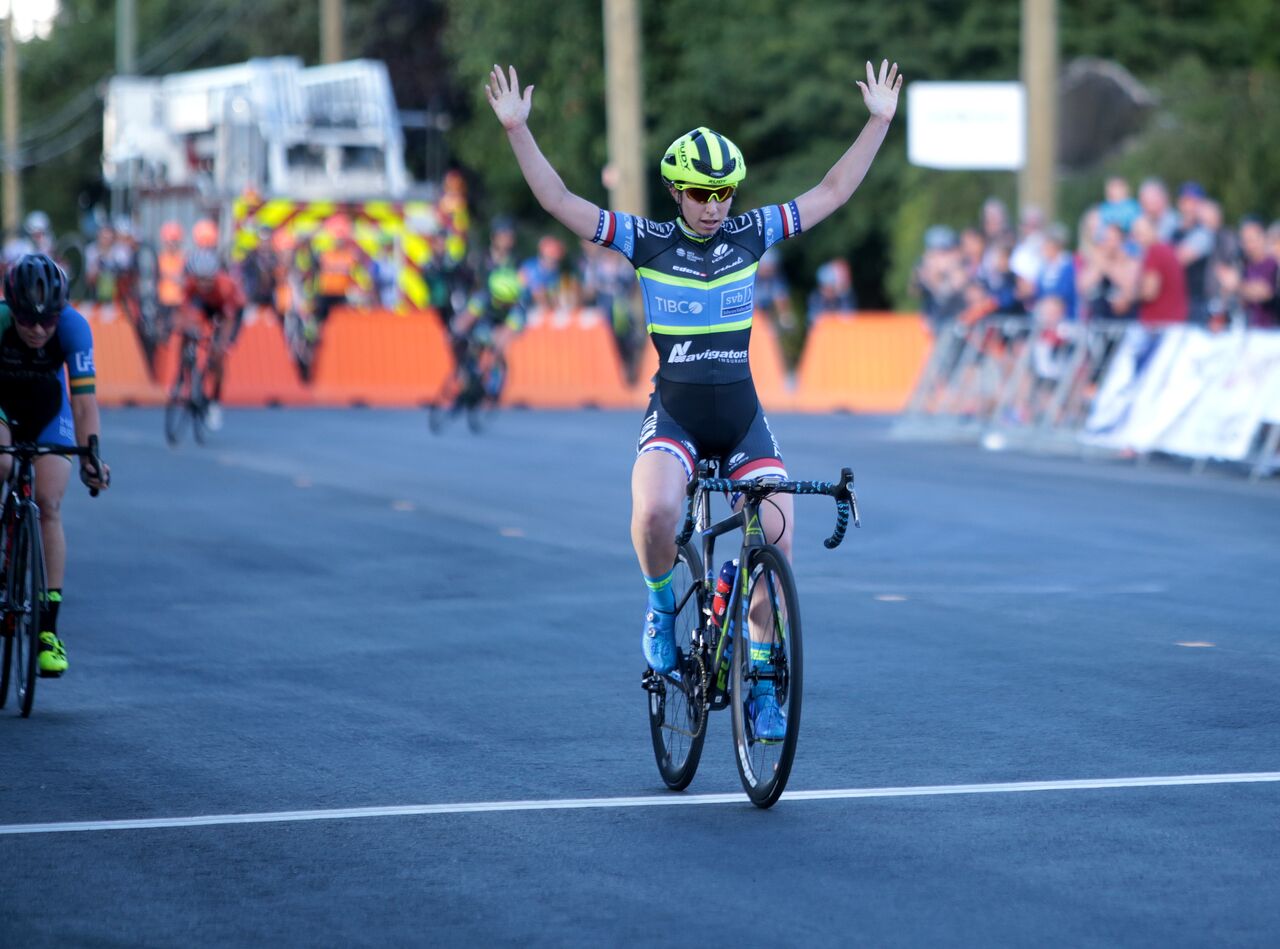 Kendall Ryan flashed a huge smile minutes after crossing the finish line at the 2018 Tour de Delta North Delta Criterium on Friday night to kick off BC Superweek. The 25-year-old Team TIBCO-Silicon Valley Bank from Camarillo, California was part of a break with ten laps to go that saw she and the other five riders take a turn at the front to stay away from the peloton. Ryan had to be creative tactically to play to her strengths as a sprinter and get the win.

During the breakaway, Ryan took short turns at the front to conserve energy – and the other riders let her. It surprised the 2015 US National Criterium Champion. “I was expecting them to yell at me at some point because I was short pulling them. It’s not a cool thing to do, but a sprinter’s gotta do what a sprinter’s gotta do!”, expressed Ryan.

Ryan had some big time help in the break as well, with teammate Emily Newsom helping ensure a TIBCO- Silicon Valley Bank victory. “During the last couple laps, I was just telling Emily to ride smart and take shorter pulls than she normally would and just try to save it for the end,” said Ryan, who was born into a family of cyclists and began racing BMX at just six-years-old. “I knew the breakaway was going to try something on that last lap. They attacked with three corners to go. I just told Emily, ‘Ride ’em down, ride ’em down!’ and she dug so deep that I just ended up getting around on the last corner and it was over at that point.”

For her part, Newsom was thrilled for her teammate to get to the top of the podium. “I was pretty excited, I knew once I saw that she was in the break I thought, ‘Yeah, we got this as long as I can just keep this away, we’ve got the race.’ so I was pretty committed to making us stay away,” said the 34-year-old from Fort Worth, Texas.

BC Superweek and the Tour de Delta continue Saturday with the Ladner Criterium. The women’s race starts at 6:15 pm and the men begin at 7:25 pm.

For more information about BC Superweek, please contact Brian Wiebe at 604-916-8448 or email brian.wiebe@bcsuperweek.ca.