Kendall Ryan Wins Her Second Straight Race at BC Superweek

It must be the blueberries. Rally Racing teammates Eric Young and Brad Huff are staying with host housing in Ladner and after opening BC Superweek with two straight podium appearances for Huff and two straight wins for Young, Huff gave credit where it was due post-race.

“Our main asset with this team is our host housing in Ladner – Debbie and Mark – they’re a really great couple. Great banana bread, she made blueberry muffins today, I think that was really what got us to the line,” exclaimed Huff, who started riding bikes as a child at Spokes BMX track in Springfield, Missouri.

It is blueberry season in BC’s Lower Mainland and Delta, but the region may soon be known for exploits of these two American riders who came to the first two days of BC Superweek without the rest of their team, but still dominated the podium. Saturday’s 60-lap, 54 kilometre race was marred by a handful of crashes, including one with two laps to go which impacted a massive lead out by the entire Silber Pro Cycling Team.

“There was a crash on the back side with two laps to go and we were super lucky to get through that clean. Once again, the Silber guys were a strong team just like last night and led it out,” said the 29-year-old Young, who won the US National Criterium Championships in both 2011 and 2013. “Brad and I were lucky to just come through the last stretch third and fourth through the corner and then came around with two guys in front of us.”

For Huff, the 39-year-old seems to genuinely enjoy every single second he’s on his bike. “This guy’s name is Brad Huff, he is always excited,” laughed Young when asked what led to the final lap being so thrilling.

Whether it’s the host housing’s blueberry muffins or banana bread, or the fact that Young and Huff are just really good at racing bikes, they’ve left a lasting impression on the fans in North Delta and Ladner heading into Sunday’s UCI 1.2 White Spot | Delta Road Race. “We can’t explain how awesome it is to be in British Columbia racing our bikes with such amazing people!” added Huff.

The Ladner Criterium podium was a repeat of Friday night’s North Delta Crit as Young and Huff were joined by Florenz Knauer of Hermann Radteam in third. For the 29-year-old Knauer, who is from Germany, but now makes his home in nearby Tsawwassen, it’s his fifth straight top-6 finish at BC Superweek. 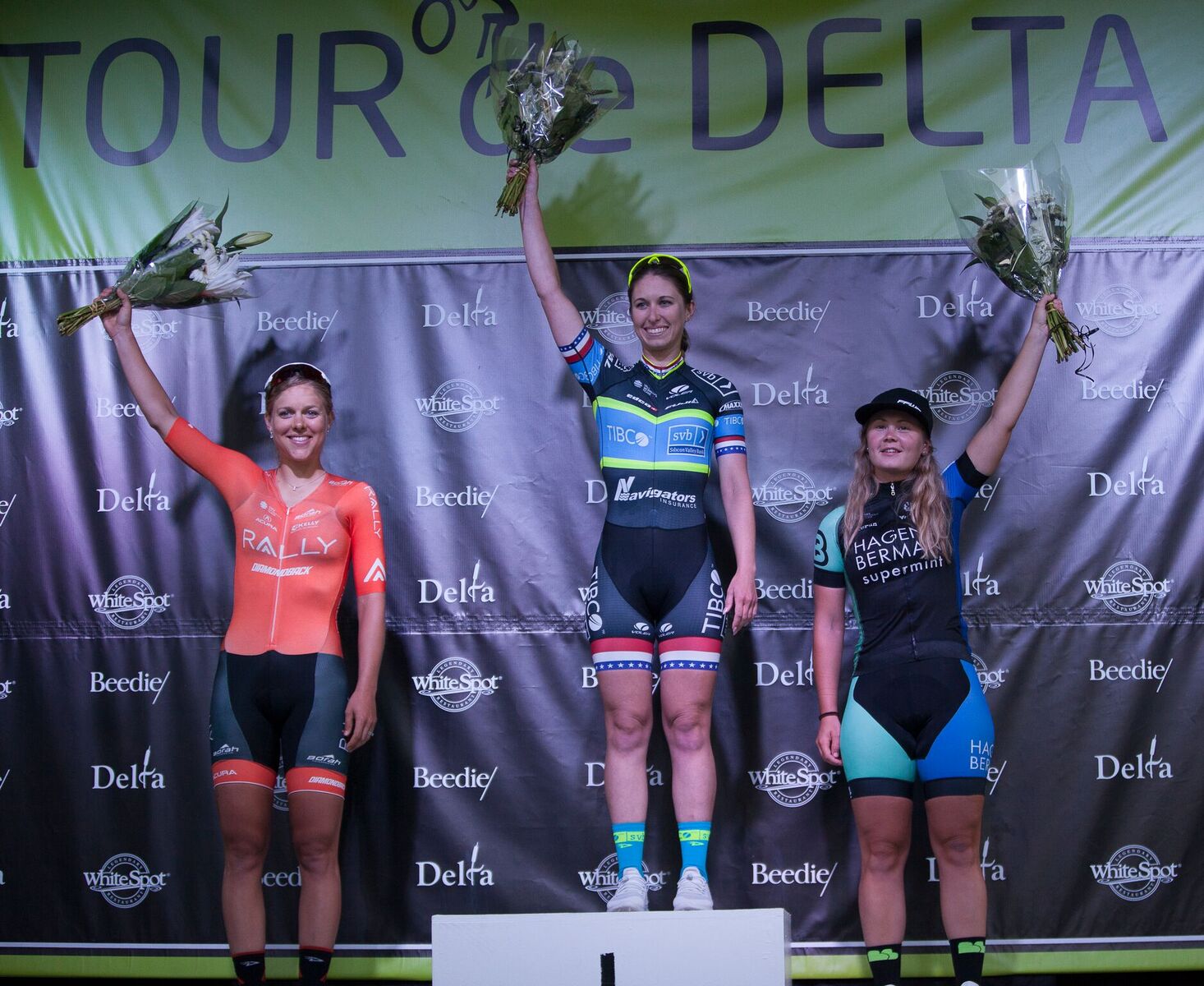 The 900-metre race in Ladner is famous for being fast and the 2018 Tour de Delta Ladner Criterium lived up to that reputation on Saturday night in the historic fishing village. When it was all said and done, a familiar face was atop the podium as 2015 US National Criterium Champion Kendall Ryan picked up where she left off and won her second straight race at BC Superweek, finishing in one hour, nine minutes, and 23 seconds.

“That last lap was super sketch! My teammate (Alison Jackson), I just let her go and they were looking at me like, ‘Why did you just let your teammate go?’ and I said, ‘She isn’t done!’, laughed the seven year pro who has been riding since she was six years old. “In the end, there were people coming down the right, I slipped in for third, just barely got by and took that last corner pretty hot.”

The 25-year-old from Camarillo, California is establishing herself as a powerhouse at BC Superweek. Including last year, she now has five wins in her last seven races at the series. Calgary’s Kirsti Lay, who rides for Rally Cycling and finished second at the 50-lap, 45 kilometre Ladner Criterium in 2017, found herself in the same spot this year despite being aggressive throughout the race.

“I was trying to do something, it’s kind of a vacuum course so we were just going to see if we could do something early and then not shut it down for the sprint. We have a sprinter here who’s pretty good so it’s fun to ride for her,” said Lay, a former speed skater who was forced to retire due to an injury six years ago. “It just got a little crazy in the last corner with two people up the road and you never know what the last lap is going to give you.”

24-year-old Harriet Owen rides for Hagens Berman | Supermint and specializes in the sprint, but just couldn’t get ahead of Ryan and Lay in Ladner on Saturday.

“We tried to get a lead out train going, it was so hairy on that last lap, especially down that back straight so it was kind of like I lost it a little bit, but there are plenty more days to go,” she said, already looking ahead to Sunday’s UCI 1.2 White Spot | Delta Road Race. “Our team – we’ve got a good squad here so fingers are crossed for the road race tomorrow.”

BC Superweek and the Tour de Delta continue Sunday with the White Spot | Delta Road Race. The women’s race starts at 9:30 am and the men begin at 1 pm.