Tsawwassen, BC – In a new twist this year, organizers changed the route of the White Spot | Delta Road Race to include twice as many passes by the start/finish line. The goal was to try and replicate the excitement of a criterium race in a road race and if Sunday’s edition is any indication, it’s safe to say organizers achieved their goal.

Despite still being an extreme test of strength, strategy, precision and endurance, the men’s race saw numerous attacks and aggressive moves by a variety of riders and teams – all in pursuit of valuable UCI points and $8500 in prize money. After a bunch sprint of 34 riders, it was Eric Young of Optum p/b Kelly Benefit Strategies who crossed the finish line first, just ahead of teammate Ryan Anderson of North Vancouver and Brandon Etzl from Team NCCH p/b DEC Express. In the final straightaway, Young almost made it look easy.

“I did a great job sitting in and the team did everything else for me. I didn’t really follow any moves the entire day, just conserved and gambled on it coming together. We had guys in every move so if someone up ahead stayed away we would have been fine, even that last little breakaway that was caught in the final kilometre, we had Jesse (Anthony) in there,” said the 26-year-old from Geneva, Illinois. “The team did a great job covering everything the whole day and then Ryan and I and Will Routley took the lead in the last kilometre. I just went before the final turn because I knew it was pretty short from there. I got the clearance from there and was able to hold it.”

“With the new circuit, I think it was easier for the group to stay together. I found myself in a lot of moves today, which was good and then coming together at the end,” he explained. “I didn’t personally win today, but Eric and I hooked up really well in the finish and I was able to give him a perfect lead out to win, that’s an important thing for him and me going forward for the rest of the year, so I’m glad it came together the way that it did.”

At one lap to go, Anderson and Young’s teammate Jesse Anthony, Matteo Dal-Cin of Silber Pro Cycling and Etzl’s teammate Jack Burke had a 30 second lead on the peloton and it looked like they might hang on for the top three spots on the podium, but the pack had other ideas.

“With the three guys, we had one, so we weren’t doing any of the work. When we heard (the gap) was 15 seconds and it wasn’t that far to go, I knew it was going to come back,” said Anderson. “It was just going to be too hard (to hang on), there was still too many guys in the group that wanted it to come back together. So we hooked up and we had Will as our last guy in front of me and it worked out perfect today.”

Young acknowledged that Optum is a familiar face on the podium in the Tour de Delta, and especially the White Spot | Delta Road Race.

“We’ve done well at this race before, it’s a really great one to prepare for the late season races so we’re really happy to go 1-2 again, it is awesome,” he said.

Anderson added that despite the change in the course, being on the podium in this race five times over the last seven years may have given him a bit of an edge on some of the other riders.

“Today in general, the course was different, but I know the roads pretty well. Experience here plays a bit of a factor, but I think it was important to just read the race because it’s almost like a new race this year because the course is different,” he said. “It’s so different than the last couple of years and you have to adapt and I think we did that today.”

Etzl wasn’t really expecting to be on the podium himself and thought his teammate would be able to pull it out.

“It’s a great race. I was kind of looking forward to seeing (Jack) Burke on the podium possibly and unfortunately we caught him about 200 metres to the line. He put in a great effort and it’s too bad he couldn’t take it to the line, but at least we had some result,” said the 24-year-old who won Stage 1 of the Tour de White Rock in 2013. 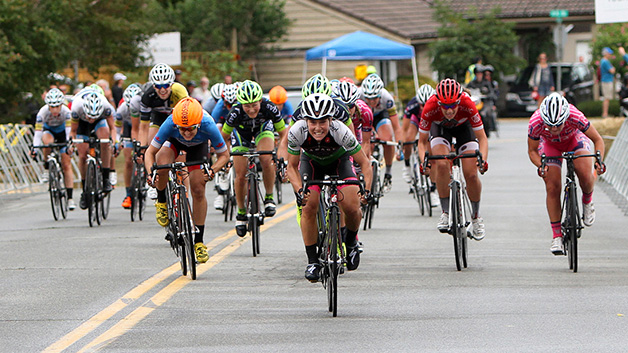 If Shelley Olds is getting progressively better during BC Superweek, you have to wonder what she has up her sleeve for the remainder of the series. The 34-year-old from Groton, Massachusetts won in a bunch sprint to claim the 15th edition of the White Spot | Delta Road Race and more importantly – the 40 UCI points that go along with it.

“It’s all progress, just getting back to racing criteriums again so with a road race today, it’s a different thing,” Olds said after finishing the race in two hours, 45 minutes, and 28 seconds. “But I’m very happy with today, (being first) was the goal for the weekend, so I’m very happy with the win.”

For most of the race, the 56-rider field seemed content to be conservative and wait for a sprint to the finish. The approach turned to cautiousness with two laps to go when it started to rain heavily and the course got slick.

“I think everyone was really concerned about the road once the rain started, there were a couple of crashes, I think one of my teammates went down, so we were all trying to be safe,” said second place finisher Leah Kirchmann, the 2013 and 2014 winner of the White Spot | Delta Road Race. The Winnipeg product gains 30 UCI points with her result.

There weren’t too many aggressive moves made during the race with Olds especially wanting to keep it simple and not overthink things.

“I think the other nights I was doing a little too much by wanting to win the race, so today I wanted to win the race and tried not to do anything,” said Olds, who needed to find a team to join to be eligible for race, due to its UCI designation. “I was racing with a mixed team today so it’s not my normal professional team, but Garage Racing was amazing and it was really fun racing with them. I want to thank them for having me on the team. Cycling is a team sport and we showed that today.”

The grueling 105.2 kilometre race saw the women do eight total laps with very few riders breaking away from the pack.

“There was some attacking from the bigger teams, but with the crashes and the rain and everything, it sort of slowed down the race because we didn’t want to take any risks in the corners,” said Olds. “There were some big crashes so I think people were more safe… it was a little tenuous.”

Finishing third was three-time Olympian Joanne Kiesanowski of New Zealand. The 36-year-old is a three-time Commonwealth Games representative, and eight time National Champion for New Zealand. She was also on a roll heading into BC Superweek, with five straight Top 10 finishes.