2019 is the third edition of the New West Grand Prix and since the inaugural race two years ago, fans in The Royal City have seen only one man atop the podium – Florenz Knauer. The 30-year-old has made a name for himself with his results over the years at BC Superweek, but he hasn’t dominated any race like the New West Grand Prix’s 55-lap, 51.4 kilometre loop.

Knauer, riding for Herrmann Radteam, sat back in the peloton and attacked on the last half of the final lap – the notorious climb up Carnarvon Street on the back side of the course. It’s a tactic he used to win in 2017 and 2018. This year, he wasn’t prominent in moves during the race, on the last lap looked to be around 20thplace, and not even in the top five in the climb up Carnarvon. However, it’s exactly what he was waiting for. “It’s always the same, I carry so much momentum and speed (on that climb), so no one can go on my wheel – it’s a trick,” he explained.

New Zealand National Team member Campbell Stewart was second in the race. He tried to attack like Knauer, but just couldn’t catch the German. “I just gave it a crack, I jumped on Sam Bassetti’s wheel at the climb. I got a good little lead out from my teammate Corbin Strong, he smashed it on the first hill, and I had to take over after that. I don’t know how Florenz does it, he just goes up on his way, he’s gone, got the gap and the speed to be able to make a break down the hill.”

Fans and riders alike were shaking their head with disbelief at how Knauer did it, but he admitted post-race that it wasn’t as easy as it looked. “I think the rain played a little bit in my favour. I have good tires, I’m confident in my bike and my skills riding around the corners, so I always try to get as much speed as I can into two of the turns. This time someone got in front of me, so I had to kick on again and I had to go really deep – it was close at the end, I was just happy to see the line.”

Despite not getting the win on Tuesday night, Bassetti, riding for Elevate-KHS Pro Cycling, is having a tidy trip to BC Superweek. The third place finish in New Westminster is his fourth straight podium at the series after a win in Sunday’s White Spot | Delta Road Race, a third place result in Saturday’s Ladner Criterium and a second place finish in Friday’s North Delta Criterium. He too was wondering how Knauer was able to get away with making the exact same move three years in a row.

“He’s really cagey and you’d think one of us would figure out to be on his wheel at the bottom of the hill, but none of us were and he came by us hard and timed it perfectly,” said Bassetti. “Florenz was strong all the way to the top of the hill and we just couldn’t get him.”

By the time the men crossed the finish line to wrap up the 2019 edition of the New West Grand Prix, a steady rain was falling. It’s expected to continue into Wednesday. The roads were slick in New Westminster but riding on the famed cobblestones at the Global Relay Gastown Grand Prix when they’re wet offers a completely different challenge to the riders. Knauer was second in Gastown a year ago, fans and fellow competitors will have to see if he has any tricks up his sleeve to make it to the top of the podium like he has at the New West Grand Prix over the years. 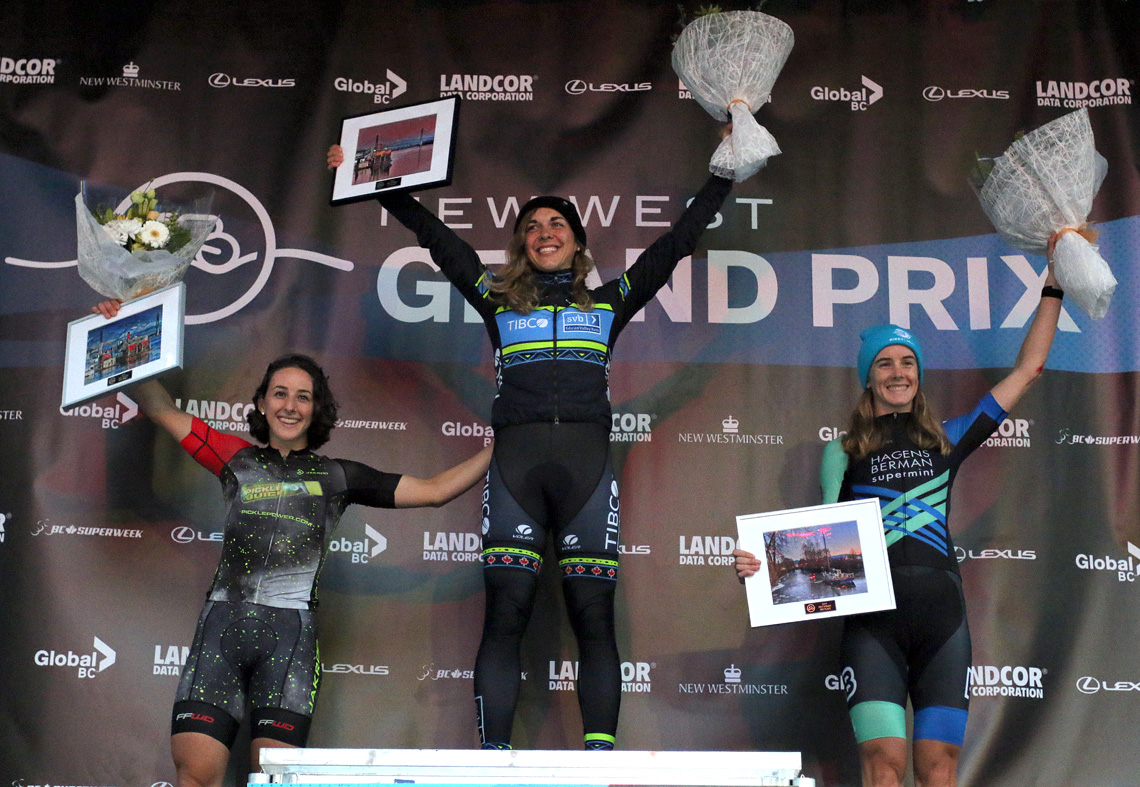 For the third straight year, the New West Grand Prix was truly a race of attrition as the women’s field got quickly whittled down less than halfway into the 40-lap, 37.4 kilometre course. And there was an added wrinkle to the most difficult criterium in BC Superweek – a steady rain began to fall with less than ten laps to go.  In the end, it was a TIBCO – Silicon Valley Bank rider atop the podium for a third straight day at BC Superweek and for the second straight day, Vermillion, Alberta’s Alison Jackson was the cyclist in question.

Despite the diminished field, 30-year-old Jackson thought the race would break out on its own. “We thought there would be a sprint from the group, but my teammate Sharlotte Lucas was doing a great job covering some things and I was feeling really strong,” the former Trinity Western University triathlete and cross-country runner described. “Since it was raining, I didn’t trust that the last corner would be too safe, it was a bit risky.”

On the last lap, Jackson attacked on the back half of the course up the Carnarvon Street hill, going from the bottom to the top of the hill and past the field to speed into the last stretch to the finish line. “I felt good on the climb, so I just went all in and then looked behind me on the final straight and it was clear. I did that for the crowd – it’s fun to kind of gamble like that and I think the crowd appreciated it.”

Jackson also won Sunday’s White Spot | Delta Road Race and Kendall Ryan took Saturday’s Tour de Delta Ladner Criterium. For Jackson, who was the 2015 Canadian National Criterium Champion, she is selflessly thrilled to see her team pick up another win. “I consider me to have three straight wins, because when Kendall wins, I feel like I’m winning too,” she said.

Second place went to Maple Ridge, BC’s Maggie Coles-Lyster, who rides for US-based Pickle Juice Pro Cycling team. The 20-year-old noticed that no one was too aggressive in the last few laps of the race, with everyone just keeping a keen eye on the other riders in the peloton. “It was a cat and mouse kind of game. There were teams watching on that last lap and it just became a matter of surviving the slippery course,” said Coles-Lyster, who won the Tour of Somerville in New Jersey in May. It’s the oldest major bike race in the US and is known as the “Kentucky Derby of Cycling”.

North American’s richest criterium is next in BC Superweek with the Global Relay Gastown Grand Prix coming up on Wednesday night. The women race at 6:15 pm while the men race at 7:30 pm.