There’s an old cliché that says that sports brings people together and no truer words describe German cyclist Florenz Knauer. When he arrived in Canada to race BC Superweek in 2012, little did he know how much the trip would change his life. Like other cyclists from around the world, Knauer relied on host housing when he came to ride the series. In time, the daughter of the woman who ran the host housing program became his girlfriend. They maintained a long-distance relationship for three years and Knauer left his job and family and moved from Germany to Metro Vancouver just last year.

Fast forward to Tuesday night and the inaugural New West Grand Prix. During the last lap of the 47.5 kilometre men’s race, Knauer was 15th heading into the first turn, used an attack on the backside uphill climb to overtake the field and sprinted to a first place finish. Overall, a good night for the 28-year-old, but he wasn’t quite done yet.

After the podium presentations were done, Knauer asked for the emcee’s microphone and called for his girlfriend Alisha Lundgren to join him on stage. He then filled the thousands of fans in on he and Alisha’s story, got down on one knee, and proposed.

“Actually, I had it planned for Gastown tomorrow, but after the win today, I had to do it. Tomorrow I might have crashed or something,” a beaming Knauer said. “I was more nervous for the podium presentation than the entire race. It kept me awake the last couple of days too, I was trying to sleep, but kept thinking about it. It’s a big step for me, but it’s definitely the right one and I’m glad she said yes!”

Knauer finished the 40-lap circuit in one hour, four minutes, and 17 seconds. With multiple podium appearances over the years, including a third place finish in Friday’s MK Delta Lands Criterium and Tuesday’s win, the BC Superweek series has a special place in his heart – for more than the obvious reasons. “The series means a lot to me, I always have success here, and it helped me meet Alisha. It means a lot,” he said.

The New West Grand Prix course definitely left an impression on the riders, with no team able to dominate the peloton during the race. It is a difficult course to walk, let alone ride a bike at speeds pushing 70 kilometres an hour.

“It was really hard. It’s just a small climb after the first corner, but in the end, you feel it a lot in the legs,” said 33-year-old second place finisher and Italian rider Davide Vigano, who races for Team Cinelli Chrome. “I took the climb a little bit in front when I saw the other guys attack (on the last lap), but I couldn’t follow because I didn’t have the speed. I just waited a little bit too much.”

Four-time junior track world champion Campbell Stewart, riding for Cycling New Zealand, was third. He used his extensive track experience to push himself to the podium.

“It’s powerful out there, we’re doing a lot of power work and that’s mainly the part of the track, so everybody goes pretty good in those types of climbs,” the 19-year-old said. “The speed is really fast coming into the last corner, it’s pretty hard to get around it, and I just kind of went full speed to the finish.” 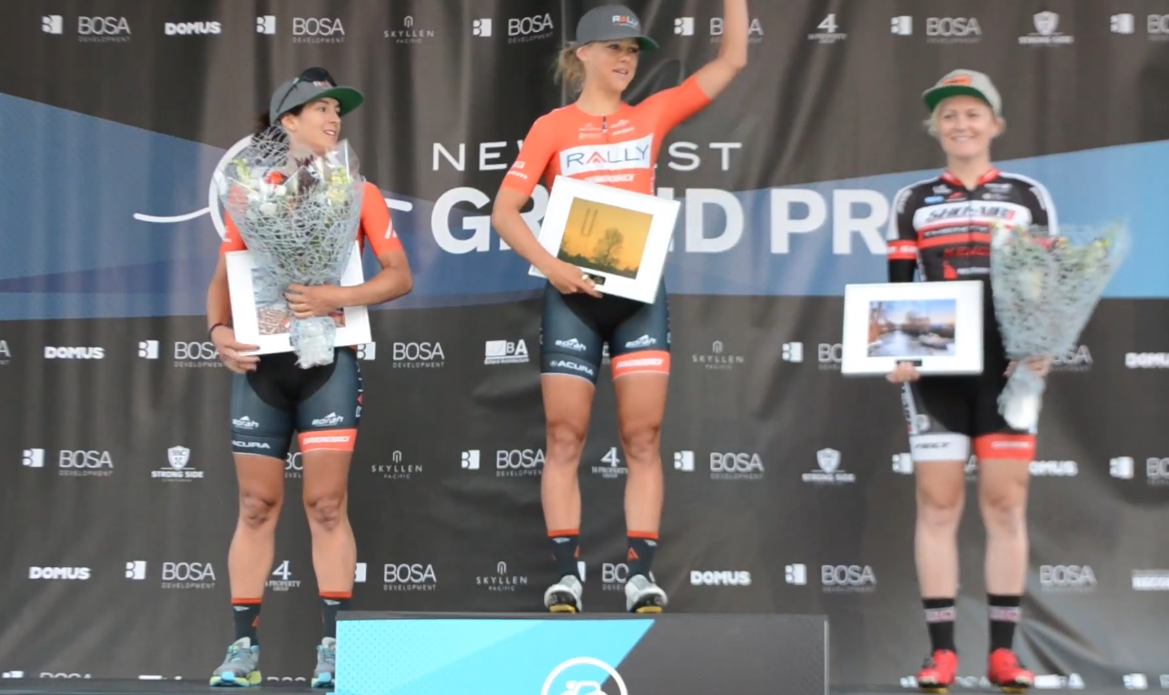 The course at the New West Grand Prix presented an immense challenge to arguably the strongest women’s field in BC Superweek history, with 61 riders starting the 40-lap, 38 kilometre race and only 1
​8​ finishing.

Despite the race being new to BC Superweek, the result at the top of the podium was almost exactly what bike racing fans saw just four days ago at the MK Delta Lands Criterium – Kirsti Lay building a huge lead en route to victory, finishing in 59 minutes and 24 seconds. On Friday, it was Lay going away off the front just five laps into the race, on Tuesday in New Westminster it was halfway through the race when she went for it and built a massive lead.

The gap between Lay and the peloton varied at times, but with five Rally teammates in the pack, the Montreal native felt supported throughout. “It was a great race, my teammates set me up perfectly to take off and countered at the right time,” explained the 2016 Canadian Olympic bronze medalist. “Everyone else was a little gassed, so it’s just nice to know that they were behind me and ready to go at any moment.”

The course doesn’t necessarily lend itself to a bunch sprint for the finish, so it’s not much of a surprise that Lay decided to go for it and try to hang on for the win. With a steep climb on the backside of the course and speeds approaching 55 kilometres per hour in the last turn, it may not have catered to riders who are sprint specialists.

“There’s not much relief out there, the downhill is pretty short and then you’re in the headwind coming down (to the start/finish), so you still have to work,” said Lay. “It’s a great course, it’s a little bit of attrition out there and that’s what makes it fun and exciting.”

The riders now set their sights on the Global Relay Gastown Grand Prix on Wednesday night, which is the richest criterium in North America with a $12,000 prize for the winner. When asked after the race if she had anything left for Gastown, Lay was emphatic, “Oh yeah!”

Vancouverite Sara Bergen sprinted to second place, 39.75 seconds behind Lay, who is a teammate of hers on the Rally Cycling team. Bergen now has five top-10 finishes so far this year, including three podiums at the Joe Martin Stage Race in Fayetteville, Arkansas earlier this spring. The 28-year-old had seven top-10 finishes at BC Superweek in 2016, including a win at the Peace Arch News Road Race and second place finishes at the Brenco Criterium and White Spot | Delta Road Race.

In third was Stephanie Roorda, who rides for Sho-Air TWENTY 20. The Vancouver native is well known at BC Superweek, with numerous podiums at the series over the years. The 30-year-old also rode at the 2015 UCI Track Cycling World Championships, winning a bronze medal for Canada in the Team Pursuit.
BC Superweek continues on Wednesday with the Global Relay Gastown Grand Prix. The women’s race starts at 6:15 pm and the men begin at 7:30 pm.