Teams and riders from Australasia are certainly making their presence felt at BC Superweek this year, and it continued on Thursday as Campbell Stewart, riding for Cycling New Zealand, won the 10th anniversary of the Giro di Burnaby presented by Appia Development. In second was Aussie Liam Magennis, who is riding for the New South Wales Institute of Sport.

Stewart, Magennis, and American rider Brendan Rhim broke away from the pack with less than 15 laps of the 50-lap, 57 kilometre circuit to go and held on to take the top three podium positions. Stewart and Magennis are just two of a handful of riders from Australia and New Zealand who have been on the podium at BC Superweek. In total, eleven of the 36 podium positions in the six series events thus far have been claimed by riders from the two nations.

The course at the Giro di Burnaby was shortened this year, so each lap was only 1.14 kilometres and once Stewart, Magennis and Rhim broke away, they worked hard to keep the pack at bay.

“I guess I just kind of picked some strong guys. They were awesome out there and just the way that we worked together was perfect,” said the 19-year-old Stewart. “I think we had a few head looks during the last four to five laps. We just looked around at each other, sussing each other out and seeing what was going to happen. I guess we were pretty far cooked by then so it took a while to get to the finish, but it was good.”

The Giro di Burnaby is famous for the generosity of the businesses and the crowds with thousands of dollars in primes available – which the three men in the break won the lion’s share of throughout the race – but there wasn’t talk of collusion to split the winnings between them.

“We each knew we were going to go for first, second, and third eventually and fight through it. It was every man for himself,” Stewart explained. “I’ve known Liam Magennis for quite a few years now and I know how strong he is. As soon as I jumped into that break with him, I knew that I was pretty much sorted.”

It’s the second podium appearance at BC Superweek for Stewart after he placed second in Tuesday’s New West Grand Prix. For Magennis’ part, the 2017 Oceania Continental U23 Individual Time Trial champion set the pace early in Wednesday’s race, being in the lead or the break for every lap. He used a similar strategy in last year’s Choices Markets Criterium during the Tour de White Rock, when he went off the front of the pack just three laps into the race en route to the win.

“It definitely felt like it. I knew those boys would ride it to the line, they’re both pretty quick, but Cam’s just a freak, I’ve never seen anyone as strong and as fast as him,” the 20-year-old from Port Macquarie, Australia said.

Rhim was just over a second behind Stewart and Magennis in third. The 21-year-old from Greenville, South Carolina has overcome a ton of adversity to get to where he is in his cycling career. Right before joining the Holowesko|Citadel team, he had a bad crash, broke his collarbone and hurt his knee. He actually signed his pro contract with Holowesko while in a wheelchair. 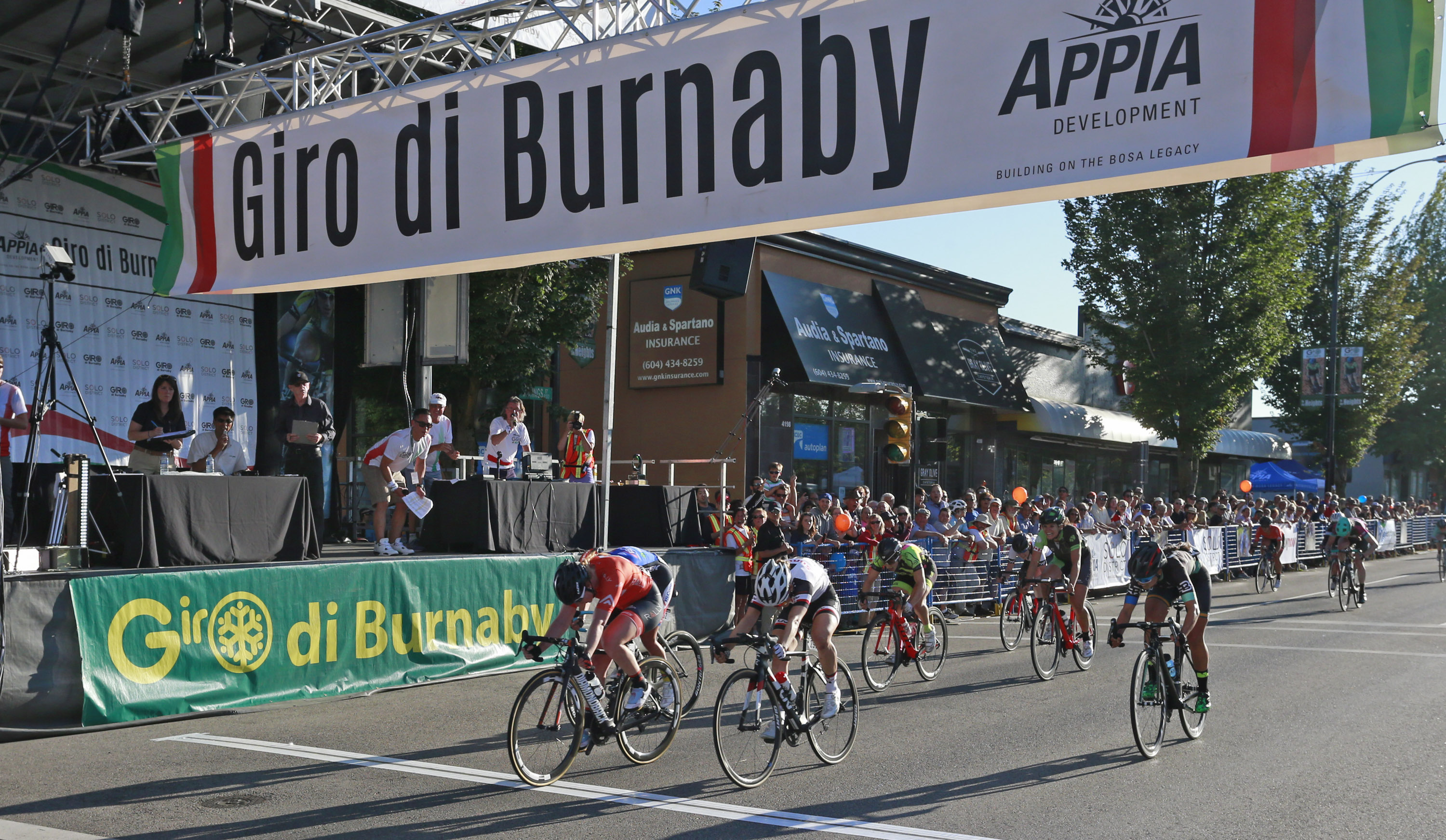 Allison Beveridge is a decorated track cyclist for Canada, appearing on the podium in several international events since 2011, including last summer at the Rio Olympics where she took bronze in the team pursuit. With the way she’s riding at BC Superweek this year, the Calgary product, who rides for Rally Cycling, looks set to breakthrough in road racing – if she hasn’t already.

The 24-year-old won the 10th anniversary of the Giro di Burnaby on Thursday night in a bunch sprint, just ahead of Leah Kirchmann, who was second overall in the UCI Women’s WorldTour rankings last year. Beveridge’s win continued a dominant week for the Rally Cycling team, as their signature orange jersey has been on the podium eight times so far through six BC Superweek races, including three first place finishes. They rode aggressive on Thursday night, confident in going for it on a bunch sprint.

“We were just trying to read the race and put in digs, and even if things weren’t going to get away, we just tried to put a bit of pressure on,” said Beveridge. “All these girls have been so great, and we’ve had quite a few different riders on the podium – it’s a lot of fun to come out here and race. I think everyone kind of questions who’s sprinting on which day because we have so many sprinters and so many cards to play, and it’s just been a really fun week.”

Beveridge experience a major international breakthrough at the second World Cup stop of 2015-16 when she won omnium gold in Cambridge, New Zealand. It was her first individual World Cup victory in just her second career World Cup omnium start. She went on to finish fourth in the omnium at the 2016 UCI World Championships. That speed served her well on the 40-lap, 45.6 kilometre circuit in Burnaby’s historic Heights neighbourhood on Wednesday.

“I love Burnaby, I really like this course, and this is my third time doing it. Every year it’s the same – great crowd, really fun bike course, that 180 hairpin always puts a good swing in the mix so it’s a lot of fun out here,” a beaming Beveridge said.

Of the eight BC Superweek podium finishes, Beveridge now has three of them – the win in Burnaby along with a second place finish in the MK Delta Lands Criterium in North Delta last Friday and a third place finish in the Global Relay Gastown Grand Prix on Wednesday. She also had a fifth place finish last Saturday at the Tour de Delta’s Ladner Criterium.

The second place finish is Kirchmann’s first podium appearance at BC Superweek this year. She is one of Canada’s marquee women’s road cyclists and a five time Canadian National Criterium Champion, including this year. Kirchmann was also third at the inaugural edition of La Course by Le Tour de France in 2014. The 27-year-old is riding BC Superweek without a team and noticed early to take her chances on the last lap.

“It was pretty aggressive all day, but after halfway through the race I noticed most of the sprinter teams were trying to keep it together. From that point, I just knew I should probably try to conserve and go all in for the sprint,” she said.

In third was Josie Talbot, riding for ISCorp p/b Progress. The Aussie, who now lives in the U.S., won the junior team pursuit world title and two bronze medals at the 2014 Junior Track World Championships. She has two top-10 finishes so far at BC Superweek this year, including third place at last Saturday’s Ladner Criterium. She was also fifth in Sunday’s White Spot | Delta Road Race.

BC Superweek continues on Friday with the PoCo Grand Prix presented by Dominion Lending Centres. The women’s race starts at 6:45 pm and the men begin at 7:50 pm.