As the Tour de White Rock presented by Landmark Premiere Properties celebrates its 40th anniversary this year, perhaps is only fitting that one of the riders who is synonymous with the race found himself atop the podium.

Florenz Knauer, whose success over the last seven years has earned him the nickname ‘Mr. Tour de White Rock’, sprinted ahead of strong Elevate-KHS Pro Cycling rider Ulises Castillo Soto to claim the Choices Markets Criterium in front of a huge crowd on Saturday night in White Rock.

It’s the third time Knauer has won the 60-lap, 60 kilometre race since 2014 and depending on his result in Sunday’s Westminster Savings Road Race, puts him in a good position to extend his streak of finishing in the top two in the Tour de White Rock omnium for overall points to eight years.

Oddly enough though, the 30-year-old German nearly missed the podium after misjudging how many laps were left the race when it was two to go. “Because Samuel Bassetti was on the hill on the back of the course, I was on his wheel. He brought me up perfectly and I jumped on the last corner and then figured out that I actually had to go one more lap. I just put everything that I had left in the tank and somehow managed to win it again.”

Castillo Soto, who is riding BC Superweek for the first time, was a bit taken aback at the challenging Choices Markets Criterium circuit, which includes a hill that might favour road racers over speedy crit riders. “It is super hard, I can’t believe it. The last five laps all I could think was to just keep pedaling because of the crowd, but I was out of gas,” the 27-year-old said.

20-year-old Cole Davis, riding for Hagens Berman Axeon, came third. Like Castillo Soto, he’s the antithesis of Knauer and is making his first trek to BC Superweek. Saturday’s criterium played to his strengths. “I love these short punchy climbs, anything under two to three minutes suits me pretty well, so when I saw the course for today, I was pretty excited,” he said. “The racing here’s been incredible, big fields, good crowds – just an all-around great atmosphere. For me, I came, and I’ve been staying at a friend’s house all week so it’s been a lot different than what I’d normally do with a team or the national team, this has been a super fun experience.”

Post-race, 30-year-old Knauer was already looking ahead to Sunday’s Westminster Savings Road Race, inspired by the performance of his teammate Christopher Hatz, who went on an attack early and nearly made a breakaway stick before being reeled in by peloton. “I think tomorrow morning I’ll eat Fruit Loops like Christopher did this morning, he was so strong today. I couldn’t believe what he did today, he worked for at least five guys.” 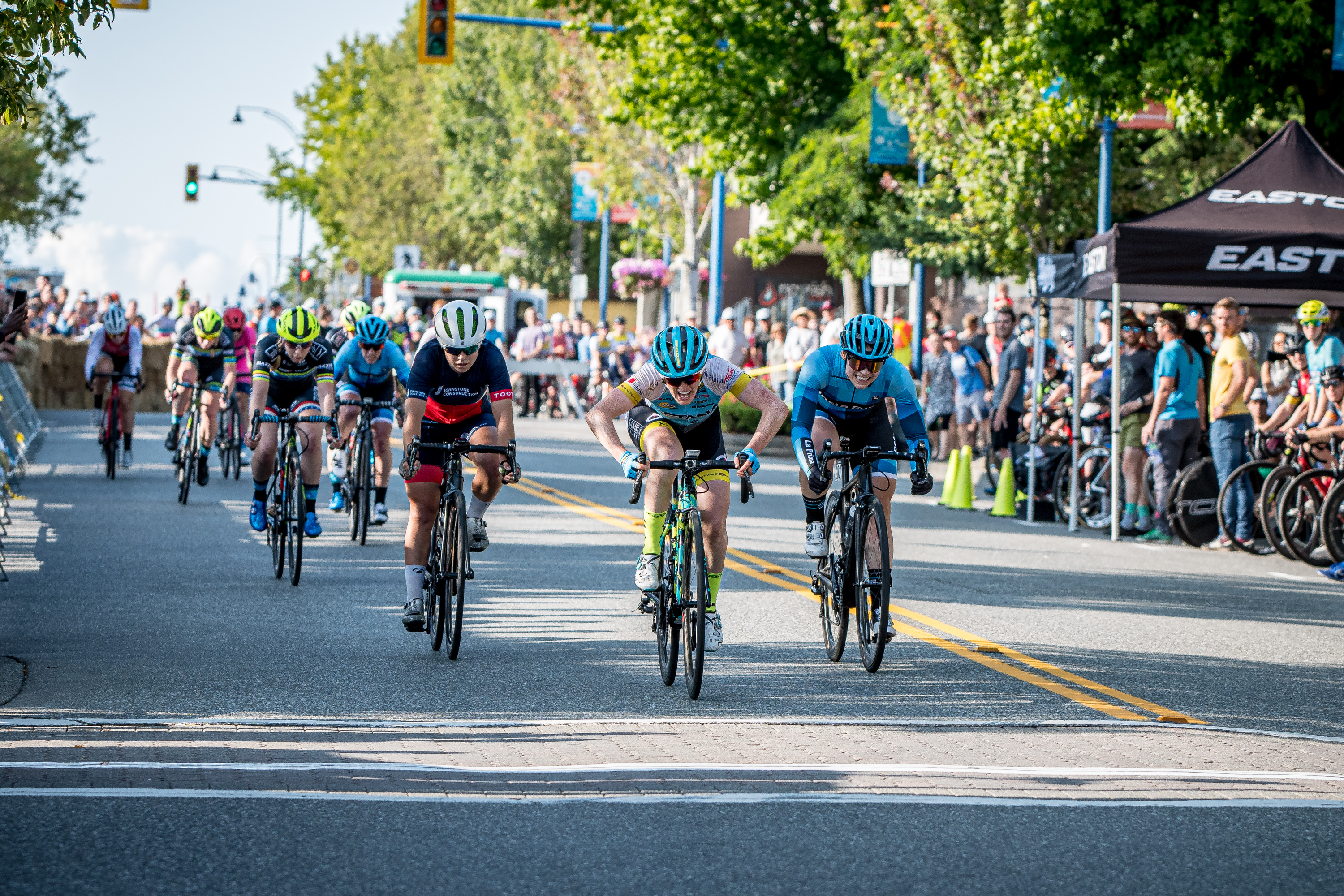 Despite being a first-year pro cyclist, Marie-Soleil Blais is definitely making her mark on the sport. The 30-year-old signed with the notable Astana Women’s Team last November and on Saturday, won the Choices Markets Criterium by a bike throw ahead of Vancouver’s Haley Gill, who’s riding for InstaFund La Prima.

“It was so hard, the fact that I was alone with no teammates and there were a few teams with a lot of riders. I knew the second that I sat, they would go away so I had to just jump on everything and never let anything go, even if that meant not winning – It was the only way to get a top result for the omnium,” said Blais, who was third at the Global Relay Gastown Grand Prix last year. “I felt like everybody was getting tired, so I kept the pace high and there was an opportunity to go for the crowd prime – I went and then there was a gap. I thought it was now or never, so I went full gas on the last lap.”

While Blais was riding solo, Gill’s InstaFund team was one of the most noticeable on the start line. “The team was amazing, they set it up all race, we’ve learned so much throughout the week and are getting stronger every day,” she said. “We went hard for the second to last lap and that set up the last lap with four of us. Marie-Soleil attacked, I tried to follow, tried to jump her but she’s so strong, had a good line and just went hard to the end.”

Blais was cognizant of TIBCO-Silicon Valley Bank after the team’s dominance so far during the week. “I knew that if TIBCO was not in a move I could sort of take some rest because it was their responsibility, but as soon as TIBCO was there, I had to be there. If InstaFund or TIBCO was up the road, I had to be there,” she described. “As soon as we would get caught, there was a counter so I anticipated the counterattack, kept the pace high, never got stuck behind a slower rider and follow move to move to move until everybody was tired and then just go for it.”

Third place in the 40-lap, 40 kilometre race went to independent rider Georgia Danford. The 20-year-old is usually a track racer, but she came to BC to race and visit family she has in Canada. “I just wanted to have some fun today, it’s the last crit so I wanted to try more stuff like bridging over. I was definitely looking out for TIBCO, they’ve been awesome all week, I was trying to get on their train,” said Danford, who was third in Saturday’s Tour de Delta Ladner Criterium. “It’s such an awesome event, I’m really looking forward to next year, hopefully more Kiwis will come over with me!”

BC Superweek concludes on Sunday with the Westminster Savings Road Race as part of the Tour de White Rock presented by Landmark Premiere Properties. The men race at 10 am while the women race at 10:05 pm.