In addition to being second in Friday’s Homelife Realty Hill Climb, the 25-year-old now has a total of seven podium finishes at the Tour de White Rock since he first started coming to race BC Superweek in 2012.

“(I do have) a lot of experience (at this criterium). The first time I was here, three years ago, I was third, last year second and this year I win, so it’s good,” he said.

Sebastian Molano of Team Colombia, in his first trip to BC Superweek, came in second. It’s his second podium appearance at the series, as he also finished second at last Saturday’s Brenco Criterium. The Colombian team, which mostly races on track, is making some noise in road races and is training for next month’s Tour de l’Avenir in France.

“I am very happy with my finish, I was trying to catch the Germans the whole time and the Optum guy (Brad Huff) and on the last lap, I did it,” the 20-year-old said via a translator. “I’m very happy to be here (at BC Superweek) and hopefully next year, we’ll show up again.”

Heizomat, which has fielded a pro team since 2008, had four riders in the race and it was Knauer’s teammate, Alexander Grad, who was third in the sprint to the finish.

“For sure, we had our four Heizomat riders and we race at home as a team and it was our goal to race here as a team. We knew this course wasn’t so easy alone, you have to save your energy till the end and then I went fast the last lap and I knew Florenz was on my wheel,” said Grad. “During the race I had to close the gap, I jumped from the field to the break and I did it very fast. I knew I could do the climb very well and so I saved my energy for the end and I knew I could make a good placement in the end.”

With his results in the first two stages of the Tour de White Rock, Knauer finds himself in the familiar omnium jersey heading into Sunday’s Peace Arch News Road Race as he hopes to further his legacy as “Mr. Tour de White Rock”. 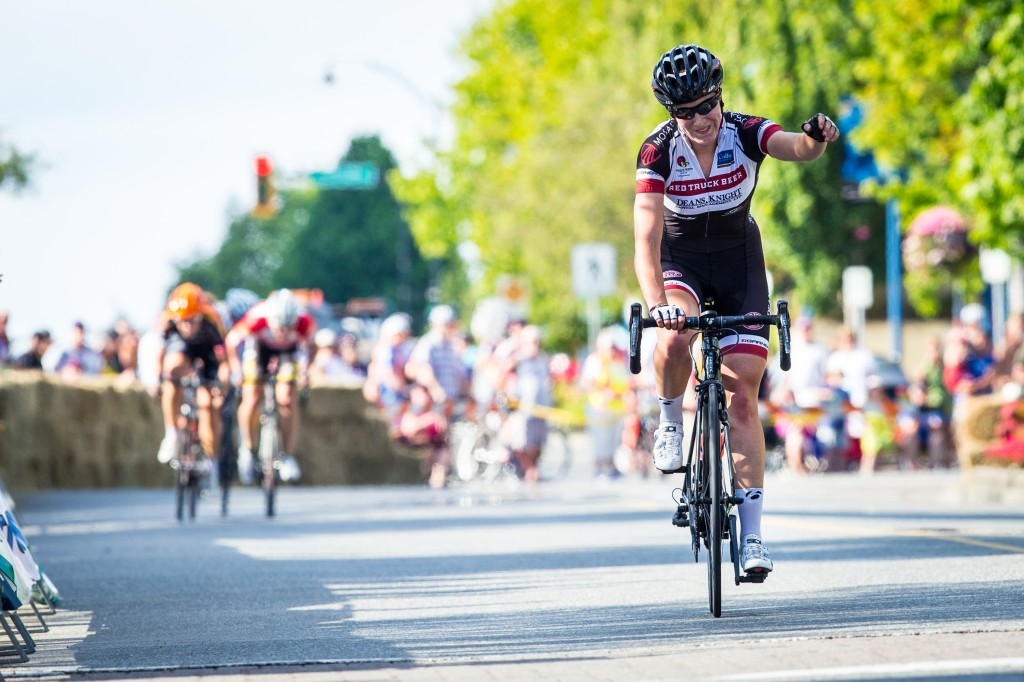 At just 19-years-old, Kinley Gibson can be aptly described as an up-and-comer on the Canadian cycling scene. The Edmonton product won the Junior National Time Trial and Criterium and also the Junior Pan-American Track Championship omnium in 2013.

And now she can add a win at the Choices Markets Criterium at the Tour de White Rock to her list of accomplishments. Gibson jumped ahead of the pack with six laps to go in the 30 kilometre race and never looked back, claiming no less than four primes in the process.

With Vancouver-based Trek Red Truck Racing p/b Mosaic Homes fielding one of the largest teams in the Tour de White Rock, they definitely used those numbers to their advantage, with Gibson counting on her teammates to set the pace.

“We had the numbers today, so we knew we wanted to go out and be aggressive so we set lots of fires up the road,” she explained. “Allison (Beveridge) was doing lots of jumps, Jenny (Lehmann) was doing lots of jumps and with about six to go, there was a little lull in the pace so I tried going off the front and it was able to stick.”

In second place, with her third podium appearance of BC Superweek, was Vancouver’s Denise Ramsden of Team Optum p/b Kelly Benefit Strategies. She won the MK Delta Lands Criterium eight days ago and was second a week ago at the Brenco Criterium in Ladner.

Friday’s Homelife Realty Hill Climb winner Alison Jackson appeared on the podium for the second straight time at the Tour de White Rock after coming in third, just under three second back of Gibson.

When Gibson went for it with six to go, Jackson thought the peloton would be able to reel her in.

“Usually breaks like that come back together and what I’ve seen in these pro races is they always do. Because for Tour de White Rock some of the full teams aren’t here, you’re more on your own it feels like,” the Abbotsford native explained. “I think I waited just a little bit and thought maybe someone else might go and no one was going, so I could have played it a lap earlier to go I suppose. I thought that other people would push the pace a little bit and catch a little bit sooner so then when I went, it just wasn’t quite enough time.”

In fact, even Gibson thought she might have gone too early. “I was a little worried with three to go, I thought they might be able to bridge, but with one to go, I was pretty confident that we had it, but you never know though.”

The third place finish ensured that Jackson would wear the Tour de White Rock leader’s jersey heading into the final stage of the event on Sunday. The omnium was definitely something on her mind during Saturday’s race.

“While we were racing, (I was) just watching the other girls. Jenny Lehmann, who was second yesterday, and the Colombian girl, and the girl from ATAC,” Jackson added. “If they were in a break, then I was gonna be in that break, so when Kinley from Trek was out in front, it wasn’t too scary, but I do prefer to be on top of the podium.”