The list of winners at the Tour de White Rock presented by Landmark Premiere Properties Westminster Savings Road Race reads like a who’s who of BC and Canadian cycling. As the longest continuously run race in North America, the Tour de White Rock – which is celebrating its 40th anniversary – has seen notable names like Svein Tuft, Brian Walton, Christian Meier, Zach Bell and Andrew Pinfold conquer the notorious 134 kilometre circuit.

Kelowna, BC’s Jordan Cheyne, riding for Elevate-KHS Pro Cycling, can now add his name to those engraved on the Hans Steida Memorial Trophy as he dominated the 2019 edition of the road race, breaking away from a group of seven with just over 40 kilometres left. “I went up the climb with four to go and I didn’t really attack hard, but I saw a gap open up and I just committed to it. This circuit is so hard that it’s almost easier to go on your own sometimes,” the 27-year-old said.

The Elevate-KHS team has been prominent all through BC Superweek, including several podiums for Samuel Bassetti along with Ulises Castillo Soto. “It’s been a hard week, I’ve done three or four of the crits, but my teammates were making all the money for me, so it was my turn today,” said Cheyne. “We got a chance – it was down to three of us in the break and my best chance was a long-range attack so that’s what I did. It was early, but if you can roll a break the whole day here, I think it’s easier because there’s no accelerations on all these climbs – it adds up in a hurry in the field. You might have to hit the wind a bit more, but I prefer to be up the road.”

In second was German rider Christopher Hatz, who’s riding for Herrmann Rad-Team. It’s the second straight year that the 27-year-old is the runner up at the Westminster Savings Road Race. “It was really hard, just like last year. The last big lap, I took the first hill and we got to four guys who went away and at the end my legs just weren’t that good. It was just pain on the last three laps,” said Hatz. “The finish was quite similar, but the beginning was a bit harder. I went early in the group and I didn’t expect the group would go past two because we had one in it, Elevate had one in it. In the end, we worked quite well together.”

Third place went to Ed Walsh of Halifax, Nova Scotia, riding for X-Speed United Continental. It’s a team that features former champion Ryan Roth. “We had a few guys like Evan Burtnik, he’s been riding great all week, and then myself and Ryan – any of us could do well on this course, so it just came down to had the best legs on the day,” the 22-year-old explained. “It was kind of nice to redeem myself, it’s been a hard week for me. I’m happy with third and I think the team should be happy too.  Rock is always the highlight for me at BC Superweek, I’ll be back!” 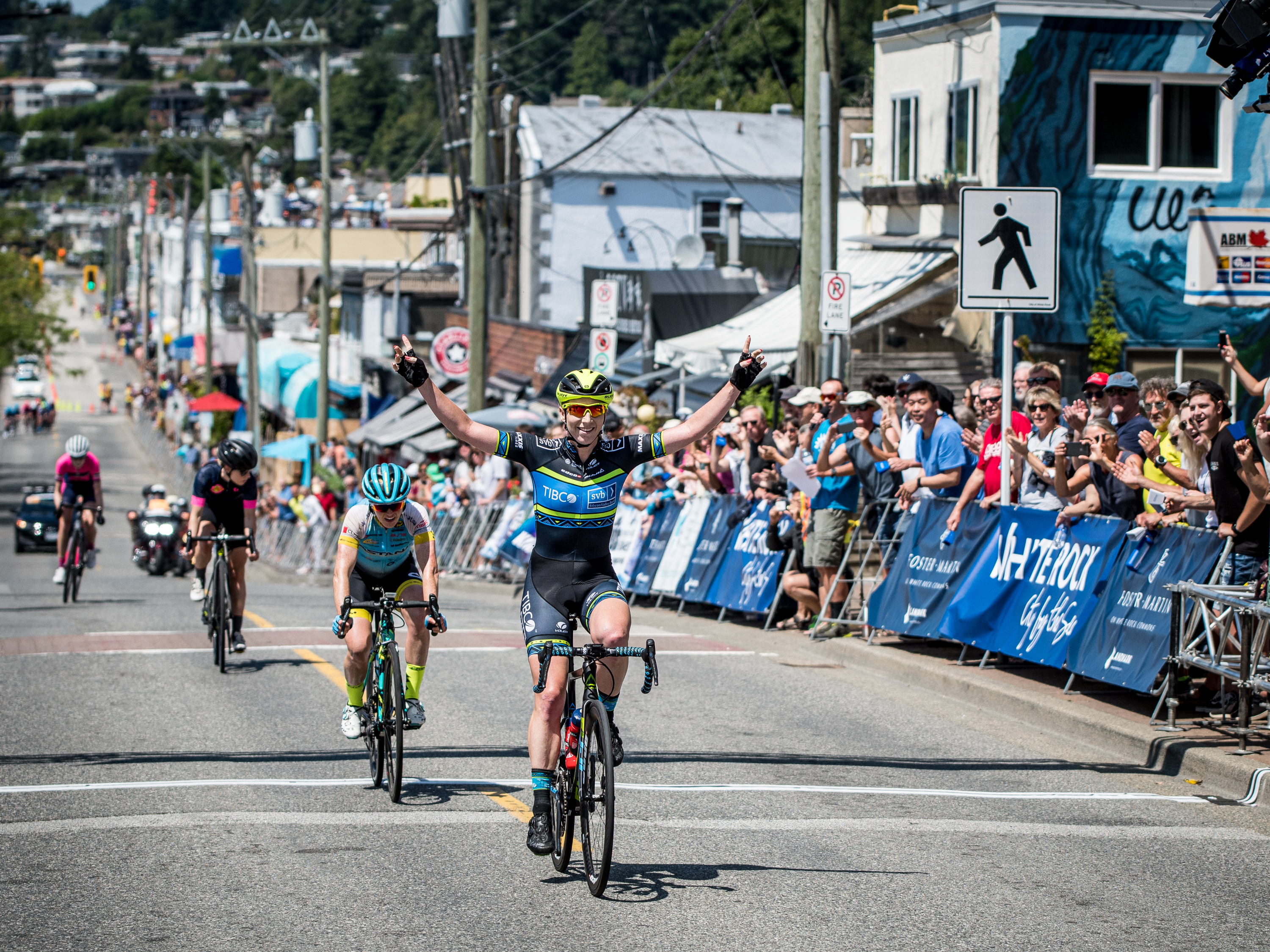 Team TIBCO – Silicon Valley Bank continued to put on a clinic on Sunday at the Westminster Savings Road Race as part of the Tour de White Rock presented by Landmark Premiere Properties. Nina Kessler, a Dutch cyclist racing BC Superweek for the first time, won in a bunch sprint, giving TIBCO its seventh win in nine races. She relied on teammates who had rode the race in the past to pass on some tips. “We had a chat with Alison Jackson, who won last year, so she gave a lot of good advice,” the 31-year-old said. “It’s going up all the time, so it’s heavy and your legs just need to do it in this race.”

Kessler wasn’t necessarily the rider pegged for the sprint for TIBCO, but the team was confident in Kendall Ryan, Emily Marcolini, Sharlotte Lucas or Kessler to get to the line. “We had four strong riders here – like Emily’s doing really well uphill and Sharlotte did an amazing job the whole week so we wanted to have a break and whoever was in there could go for it.”

That said, Kessler wasn’t really confident in the sprint at the end. “I like really fast sprints and this one is uphill, so I was a little scared of it, but I knew I had to start it early because of the tailwind. When I started it, I knew I couldn’t hold that speed to the finish line,” she said. “I just wanted to do it for the whole team because they raced so well this week – it’s really awesome. I really want to come back to BC, I enjoyed it so much!”

Marie-Soleil Blais, who’s been a top-5 finisher at seven of nine races this year during BC Superweek had her eye on not only the win, but the omnium and the $1,000 prize that goes with it. “Today I just wanted to have a really hard race because I knew there were some tired legs. I knew I had the fitness and I wanted to make it hard on a smaller group, so I had a better chance at the podium,” the former competitive hockey player said.

She was conscious of making it a hard race on all the riders, determined to keep the pace high on the main climb up Magdalen Avenue. “Eventually it worked out because we got a small group. I’m a little bit bummed because there was still a TIBCO rider in the break because I would have liked to win. I knew Nina had a good sprint, but I was getting tired from attacking every climb. It’s too bad that with all that work I couldn’t come up with the win, but with second place and the overall omnium, it’s alright.”

Blais wraps up BC Superweek with four overall podium finishes and the Tour de White Rock omnium. Victoria, BC rider Megan Rathwell was riding for Broad Street Cycling and she came third for the second straight year. The 34-year-old also won the 8-lap, 80.8 kilometre Westminster Savings Road Race in 2014.

For Kessler, she now puts herself in the same company as former Canadian Olympians Jasmine Glaesser, Joelle Numainville and Karol-Ann Canuel, along with American cycling star Shelley Olds as women who have won the prestigious Tour de White Rock.