In 2017 when New Zealander Campbell Stewart first won the Giro di Burnaby presented by Appia Development, he broke away with two other riders 35 laps into the 50-lap, 57 kilometre circuit. This year, it’s something that he thought could happen again, but instead he needed a sprint to claim his second career victory on the race in Burnaby’s famed Heights neighbourhood.

“I knew the breakaway was a possibility, but personally I just think there’s so many more great riders here. Everyone was chasing down everyone, obviously my team was just amazing today,” said Stewart, who was a four-time junior track world champion. “They sent me out and I jumped on the KHS train there and I just had to squeeze my way in and go for the line. I knew it was going to be a long one and got around and it’s nice to get the win.”

Stewart’s Kiwi team pushed the pace with about four laps to go, building a lead out that wound up being counterattacked by the powerful Elevate-KHS Pro Cycling Team, which had six riders in the race. The rider that Stewart had his eye on was Samuel Bassetti, who’d been on the podium four times in five races at BC Superweek heading into Thursday’s race. “Sam’s just been so good all week and on the podium a bunch of times. I guess I kind of knew he was going to be there or thereabout, it was pretty easy choosing which train to get on,” described Stewart.

Bassetti wound up in third, just behind German rider Marcel Franz, who’s racing for Heizomat Rad-Team. Franz had fellow Germans in the field in Florenz Knauer and Christopher Hatz and although they were wearing different kits, they were still working together in the race. “Last year we were all teammates, but this year I changed teams. We’re all still friends and here to race together,” he said.

The third place finish is the fifth podium at BC Superweek for Bassetti, including a win in Sunday’s White Spot | Delta Road Race. He admitted there wasn’t much more his Elevate-KHS team could have done to get the win at the Giro di Burnaby. “My team was pretty much perfect, we took the front at the right time, did a perfect lead out and just couldn’t quite nail that downhill finish. I think if we execute like that at least one more time, we’re definitely going to win something,” said Bassetti.

It was a raucous crowd in the sunshine in Burnaby on Thursday night, one that helped propel Stewart to the win. “They were really loud out there, I heard them, and I think that’s what really pushed me to race really hard and give them a show.” 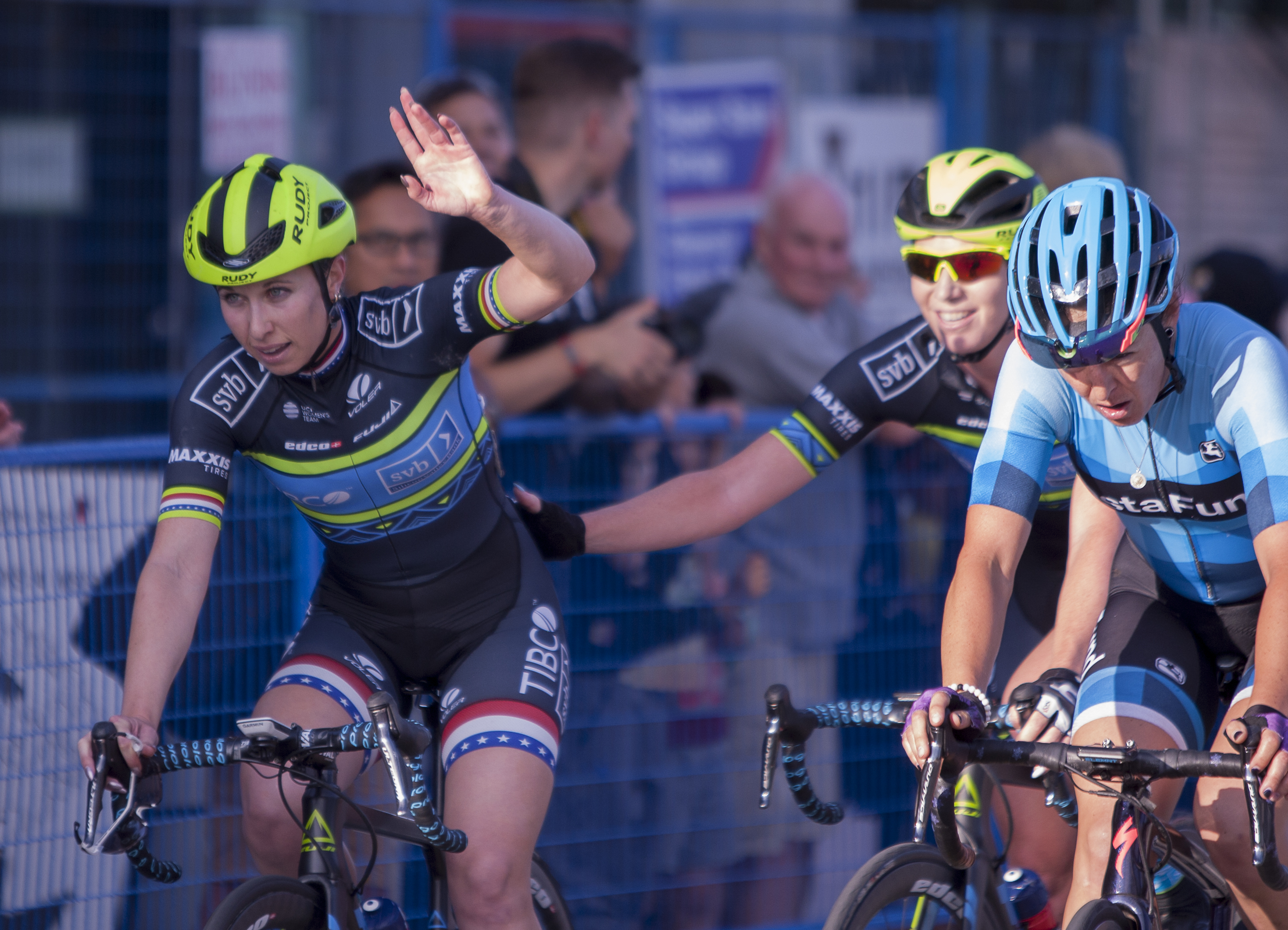 Despite numerous attacks and breaks, none of them stuck and the Giro di Burnaby presented by Appia Development women’s race came down to a bunch sprint once again this year and it was a familiar face atop the podium when the dust settled. For the second straight night and third time overall at BC Superweek this year, TIBCO – Silicon Valley Bank sprinter Kendall Ryan was the winner.

Ryan had only two other teammates in the field in Sharlotte Lucas and Nina Kessler and the three of them were operating with the thought that they might set Ryan up for the sprint. “We were playing it by ear. I told them both that they’d done so much work for me these last couple of days that I also want them to have the opportunity for a result this week. It’s important that we share opportunities and share the wealth so a win is a win no matter who’s on the team,” said Ryan, who was born into a family of cyclists and started riding when she was six years old.

With some of the other prominent teams also fielding a smaller team or in some cases, just an individual rider, the TIBCO riders knew it opened the door for them. “Today we didn’t have Hagens Berman to watch out for so we thought we could play around a little more in breakaways to see how it would go. I’m confident in Sharlotte and Nina to have a good sprint in the end. I timed it right I guess going with the last minute move on this straightaway,” Ryan explained. “I thought Nina was going to hit the gas and go for it, but she was pretty tired from covering all the moves. We’re all tired from Gastown and the last couple of days. Everyone’s tired, everyone’s in the same boat.”

Despite her success at BC Superweek over the years, Ryan is a first time winner in Burnaby after finishing third a year ago. The 26-year-old is a fan of the 1.14 kilometre course, one reason is because it forces the riders to be smart with their speed. “The first turn – the hairpin turn – you can really tell who can handle their bike, who can corner, who can hold a line and hold their speed in the corner,” she said. “U-turns are pretty hard to keep your speed on and lap after lap when you’re getting tired and you lose a little bit of your edge. The back side after the u-turn is all headwind so it’s really hard to keep position and then deep into this last turn it is tailwind.”

Ryan’s victory at the Giro di Burnaby is the fifth straight win for TIBCO – Silicon Valley Bank at BC Superweek this year. Ryan has won three races while her teammate Alison Jackson is a winner of two. They look to keep it going on Friday night under the lights in Port Coquitlam, where Ryan knows she’ll have a big bullseye on her. “We’re going to have to keep fighting every day, these girls show up to race and they’re making it hard on us and making us earn our keep for sure. I’m really looking forward to the next few days of racing.”

BC Superweek continues Friday with the PoCo Grand Prix presented by Dominion Lending Centres. The women race at 6:15 pm while the men race at 7:30 pm.