Fans who attended both the PoCo Grand Prix presented by Dominion Lending Centres on Friday night and Thursday’s Giro di Burnaby could be forgiven if they thought they were experiencing déjà vu. For the second straight night, the 1-2-3 finishers were Team New Zealand’s Campbell Stewart, Heizomat Rad-Net rider Marcel Franz and Elevate-KHS Pro Cycling’s Samuel Bassetti.

It’s Stewart’s second win at the PoCo Grand Prix after the former junior track world champion also won the race in 2017. The way that Stewart won this year was different than his first time though, as he and five other riders broke away from the pack early in the race and sprinted among themselves for the win. Two years ago, it was a bunch sprint to the line – either way, the victory and the $2,200 prize tastes just as sweet.

“I saw all the KHS guys go and I just knew I had to jump, obviously I took a couple of others with me. Once we got there, we all started working together, it all kind of came together – three of them, two of the Germans – I just had to play my time, I was probably sitting in on a few laps there because they’re a bit stronger. I wanted to get that sprint to the end,” said the 21-year-old Stewart, who won silver medals for New Zealand in the scratch and points races at last year’s Commonwealth Games.

It’s the third straight podium for the 23-year-old Franz, who’s traveled from Germany for BC Superweek. He was also third at the Global Relay Gastown Grand Prix on Wednesday and was much happier with the results in PoCo and Burnaby. “My teammate Christopher Hatz did a great job on the last few laps so that I could prepare my sprint perfectly. I’m a lot happier today, yesterday was also great – this time I was a little closer to Campbell, but I’m very proud,” Franz said.

It was the second year for racing under the lights in Port Coquitlam as BC Superweek’s only twilight criterium. The sun was mostly down by the time the men took the course and it represented a different challenge for the riders, but Stewart and the other four riders in the break used the darkness to their advantage. “It was actually kind of obvious when we came around the lap, we could see the rear taillights of the pace cars – that gave us a good little incentive to keep on going,” said Stewart, who was a member of the New Zealand Team that rode the second fastest time in history at the Cambridge World Cup this past January. “We almost caught the back of the bunch there, but we started playing a few cat and mouse games out here and we were just bringing it down to the sprinters at the end in that breakaway.”

Bassetti’s third place finish continues a solid week for the 28-year-old from Santa Rosa, California. He has placed top-6 in every BC Superweek race thus far, including a win in Sunday’s White Spot | Delta Road Race to go along with three second-place finishes and two third-place finishes. 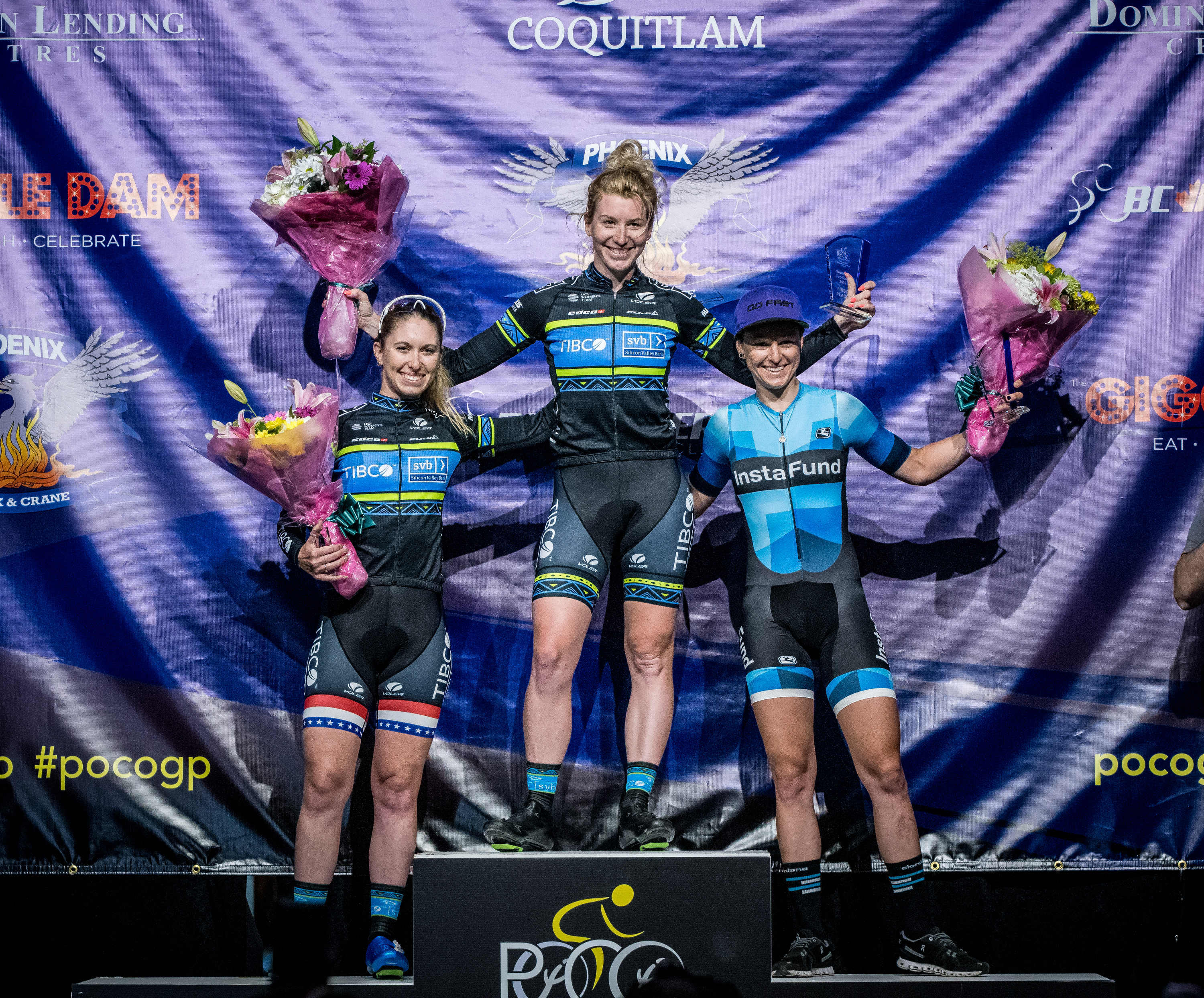 With all eyes on Kendall Ryan to see if she would three-peat at the PoCo Grand Prix presented by Dominion Lending Centres and take her fourth podium at BC Superweek this year, it was her Team TIBCO – Silicon Valley Bank teammate Nina Kessler who would get ahead of everyone in a bunch sprint to claim victory in the women’s race.

Kessler, a 31-year-old from the Netherlands who is in her first year on the TIBCO team, and her teammates Ryan and reigning Oceania Road Race champion Sharlotte Lucas launched attacks throughout the race, but with ten laps to go, the reset button was pressed and the peloton reeled in the last break.

TIBCO was aggressive on the final ten laps, setting up a strong lead out for Ryan. “It’s so cool to race with a team here, we trust each other, and we work together so well. We know that Kendall is really fast so we just led her out and she saw that I could hold it, so she just stayed there and it’s really awesome to have a finish like this,” said Kessler.

Friday in Port Coquitlam marked the sixth straight race that TIBCO was atop the podium at BC Superweek after Ryan claimed titles at the Ladner Criterium on Saturday, Global Relay Gastown Grand Prix on Wednesday, and Giro di Burnaby on Thursday while Alison Jackson won the White Spot | Delta Road Race on Sunday along with Tuesday’s New West Grand Prix.

Despite not getting the victory, 26-year-old Ryan made her fourth appearance on the podium this week with the second-place finish – just a bike throw behind Kessler. In third was 27-year-old InstaFund La Prima rider Holly Breck. It’s the San Dimas, California native’s second straight podium after she finished second at the Giro di Burnaby.

Kessler, like many riders, are experiencing BC Superweek for the first time and she noted that the energy from the crowds in the Lower Mainland is much different than some of the races she’s done in Europe. “It’s so cool to ride around the streets with so many people cheering the whole race. That’s what’s really different than in the Netherlands – we have some crits, but not like this with people all around the course. We really want to thank everyone for cheering all the time, it’s very cool,” she beamed. With the win, Kessler goes home with $2,200 in prize money.

BC Superweek continues Saturday with the Choices Markets Criterium as part of the Tour de White Rock presented by Landmark Premiere Properties. The women race at 5:30 pm while the men race at 6:30 pm.