At just 18-years-old, Campbell Stewart is already one of New Zealand’s most renowned cyclists. He has won four junior world titles in the past two years, the most by any New Zealand cyclist in history. He’s now racing within the elite ranks and it’s clear he belongs. Stewart finished first among a sprint of six riders to win the second annual PoCo Grand Prix presented by Dominion Lending Centres on Friday before a crowd of thousands in downtown Port Coquitlam.

The race was marred by a number of crashes, including one just before the final corner which saw Australian rider Todd Satchell and Stewart collide.

“They had another crash early on, on the back corner and that kind of threw them out a bit because they started their lead out train quite early,” said Stewart, who is the first back-to-back winner at BC Superweek this year after he was atop the podium in Thursday’s Giro di Burnaby. “I just tried to fire off a few wheels, get up close, and then a few of them kind of faded. A few other teams came forward with me and just sprinted for the line.”

It’s become known around the BC Superweek events this week that Stewart’s Cycling New Zealand team is putting in a lot of hard work, including their training runs before each night’s race. Stewart admits that putting in the hard yards is by design.

“We’ve had a pretty good training block and everyone from our team is just slowly picking the pace up every day,” he described. “Our focus is on the track (usually), but it’s awesome to be able to come over here and ride with the other guys from America, Canada, all over the world – and we’re enjoying it.”

The newly engaged Florenz Knauer was just behind Stewart in second for his third podium appearance at BC Superweek this year. In addition to his PoCo result, the 28-year-old has four top-10 finishes during the series thus far, including a win at the inaugural New West Grand Prix on Tuesday and a third place finish at the MK Delta Lands Criterium last Friday. He had six top-10 finishes last year and in 2014 at BC Superweek events, along with five podium appearances in 2013 and 2015.

A cyclist with perhaps the coolest nickname was third as Ed “Real Deal” Veal sprint across the finish line behind Stewart and Knauer. A latecomer to the pro cycling scene, Veal only started road racing in 2006 at the age of 29. The Queensville, Ontario resident represented Canada in the Men’s four kilometre Team Pursuit at the 2015 Toronto Pan-Am Games, winning bronze. On April 10, 2015, Veal set the Canadian “Hour Record” at the Milton Velodrome, covering 47.59 kilometres in 60 minutes. In 2011, the now 40 -year-old attended the Para Pan-Am Games where he rode tandem as the guide for Daniel Chalifour in visually impaired events and won a gold, a silver, and two bronze medals.

Kendall Ryan Adds to Her Impressive Showing at BC Superweek 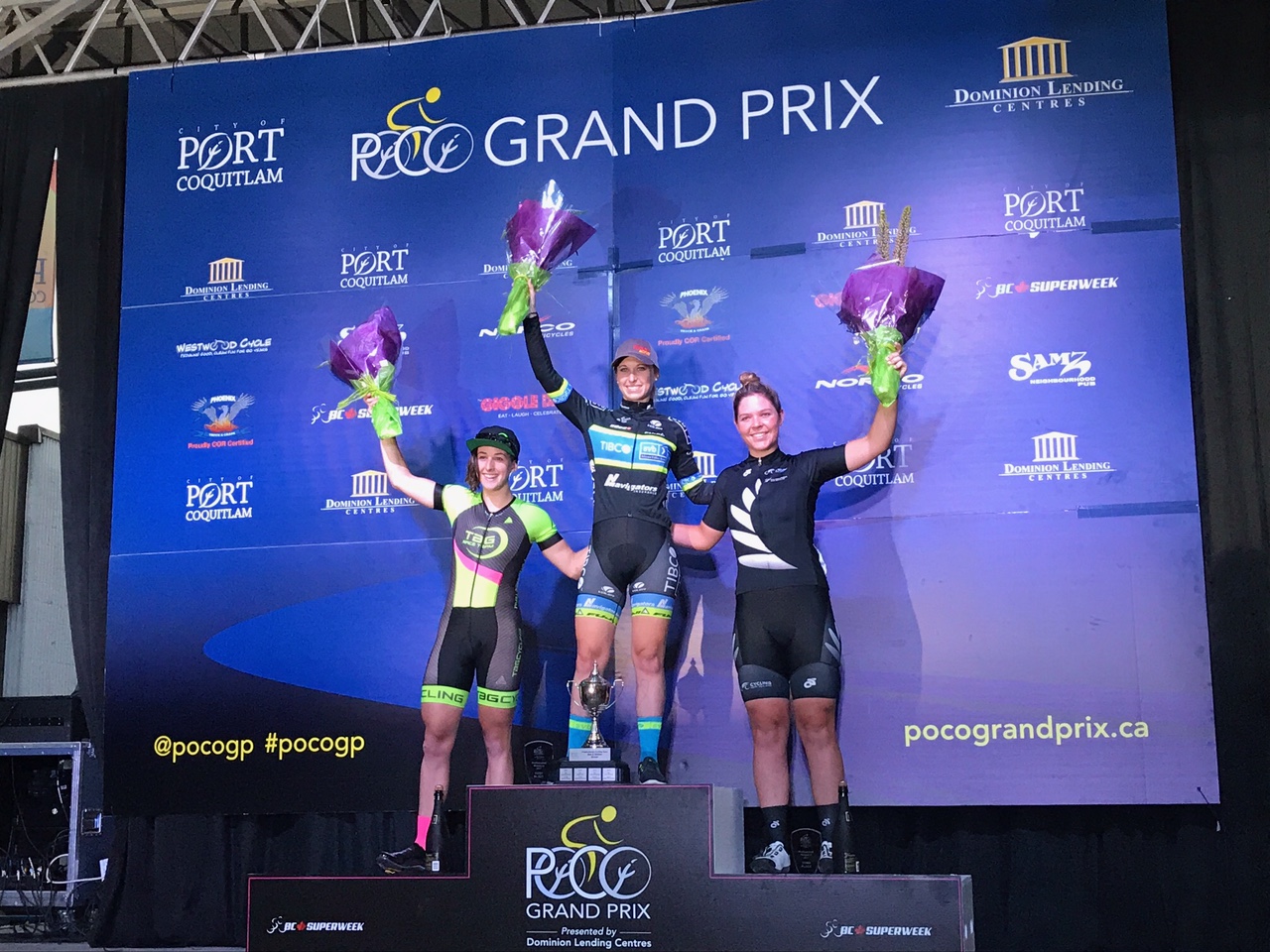 In 2015, Shelley Olds put in a performance to remember with eight podiums and three straight wins at BC Superweek – plus a number of primes to total about $20,000 in prize money. Fellow American rider Kendall Ryan is close to matching Olds’ BC Superweek record haul after a win on Friday at the second annual PoCo Grand Prix. The victory is Ryan’s third in the series this year after she was atop the podium in Sunday’s Tour de Delta White Spot | Delta Road Race and Wednesday’s Global Relay Gastown Grand Prix. The prize money alone totals more than $17,000.

The 24-year-old from Team TIBCO-Silicon Valley Bank considers BC Superweek a tune up for the Prudential RideLondon Classique in a couple of weeks. It’s one of the reasons why she’s riding so well. “I’m just training hard and I’ve got a big UCI WorldTour race coming up in London, so I’m hoping to do well there,” said Ryan, who was born into a family of cyclists and began racing BMX at 6-years-old.

As for Friday’s PoCo Grand Prix, one of the more technical courses during BC Superweek saw a quick pace with very few lulls in the 40-lap, 52 kilometre race. A bunch sprint of 30 riders decided the winner in one hour, seven seconds. Ryan and her teammates Jennifer Tetrick and Madeleine Park found themselves tagged by some of the teams like Rise Racing and Fluevog’s Crit Nasty who had more riders in the race.

“We only had three girls today, so we had a little bit of extra work for us. Jen took me through the straightaway pretty much all the way through the chicane. I was thinking, ‘Just breathe, no one’s trying to overtake us!’, the 2015 U.S. National Criterium Champion said. “Throughout the last two corners, they started to overtake and I was just trying to bide my time and then as soon as somebody hit the gas, I just raced for the last corner because I knew I could hold to the line. That was the plan and it worked!”

Maggie Coles-Lyster, who rides for TaG Cycling Race Team, was as close to a hometown rider as there was in the PoCo Grand Prix’s 56-woman field. Coles-Lyster is from nearby Maple Ridge, which is just over 15 kilometres east of the city of Port Coquitlam. She’s raced at BC Superweek for a number of years, both as a young rider and in the women’s pro 1/2 races. The 18-year-old now has four top-10 finishes during the series this year.

“Each race I’ve set these goals for myself. In Gastown it was eighth place and I got eighth. Yesterday (in Burnaby) it was fifth and today I said podium, and I got it!” a jubilant Coles-Lyster said.

Coles-Lyster was aware of the damage Ryan could do, not only because of seeing what she’s done so far during BC Superweek, but also in reading the way Friday’s race unfolded. “I’d known from watching the prime laps that you had to get through that final corner first if you wanted the win, so that was my goal, just to jump right before and get through that corner. Kendall was just too quick on the outside,” explained Coles-Lyster.