Vancouver, BC – The Global Relay Gastown Grand Prix is one of the most anticipated criteriums in North America and it lived up to its billing in a big way on Tuesday night, with 120 men on the start line at the intersection of Water and Cambie.

“It was awesome, to race in front of such a great crowd out here in BC was absolutely amazing. You could just hear the crowd, it was electric,” Keough exclaimed just before receiving a giant novelty cheque in his name for $13,000. “I can’t thank my team enough, the way they ride is amazing, so strong, so dedicated, so selfless, and for me to be able to deliver that (win) was all I needed to do.”

The final lap looked like it would come down to a sprint and indeed it did. Anderson, who was second in Sunday’s White Spot | Delta Road Race and third in Saturday’s Brenco Criterium in Ladner, went for it just a bit too late.

“I’d say I was just picking my way through traffic coming up the final stretch there, so a little too far back on my part, but still a good night,” the 26-year-old said. “It was definitely pretty aggressive, but (overall) it was a good bike race.”

With Keough being atop the podium for the second straight night, one has to wonder if it’s his team’s strategy to set him up or teammate Ken Hanson, who was going for a record-tying third straight win at the Global Relay Gastown Grand Prix.

“Ken’s won this two times, he knew the sprint. Today his legs were a little heavy coming out of that last turn in this long uphill drag (to the finish). I hit it early, hoping maybe he could hold on to it,” Keough added. “I knew (our Road Captain) Hilton Clarke was on my wheel and it was a long sprint and I’m glad I held it off.”

One of the biggest stories since UnitedHealthcare arrived at BC Superweek is the fact that the players paid their own way because the series wasn’t on the team’s 2014 race calendar. It’s a story that is partially true.

“It is (true) to an extent, all year we get great support and the one week we can make it up here and race these awesome races, we weren’t going to miss it,” he said.

One rider who excited the thousands of fans in Gastown with a couple of breakaways from the pack was Jan-Niklas Droste from Team Heizomat out of Germany. The cagey cycling fans in the crowd noticed that Droste bore a striking resemblance to Canadian cycling great and long-time BC Superweek supporter and participant Svein Tuft, who’s riding right now at the Tour de France.

“I saw the video from two years ago when he tried to win this race with a few laps to go and I got a lot of motivation from that. He’s a hero for Canada,” Droste said. “The first part of the race was really hard and a lot of guys tried to attack, but then I saw the gap and tried my best. It was really hard in the front, but there were a lot of primes and the nice crowd here, thanks for the support!” 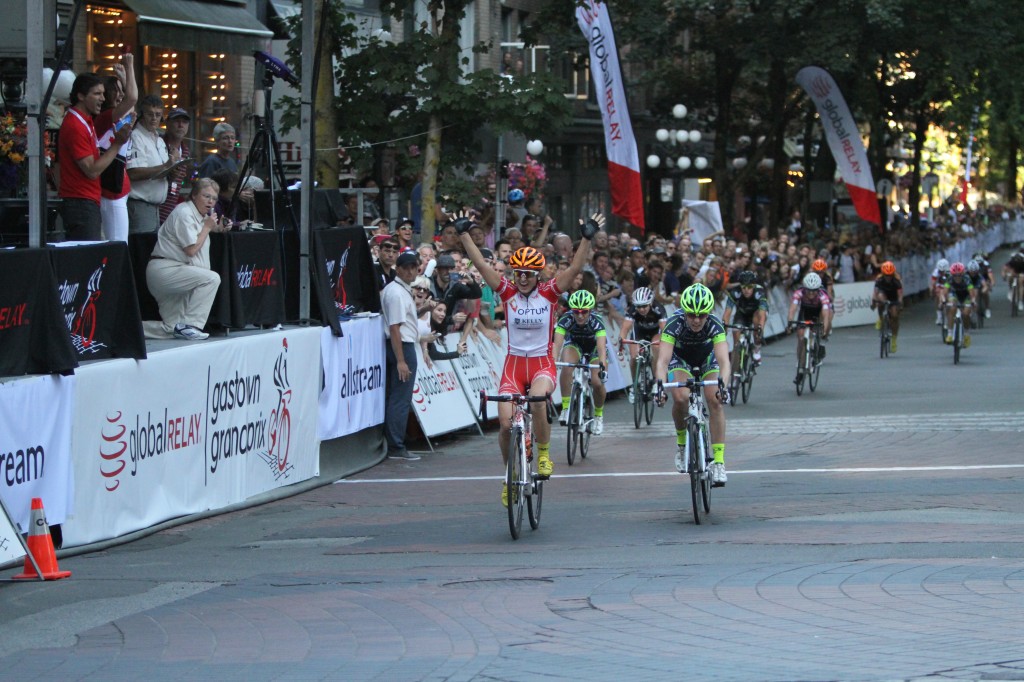 Speed necessitated a change to the Global Relay Gastown Grand Prix this year, as the criterium was increased from 30 to 35 laps after the women’s field finished well ahead of schedule in 2013. And with riders averaging one minute and 39 seconds per 1.2 kilometre lap this year, the number of laps in the race may just be upped again for 2015.

Winnipeg’s Leah Kirchmann of Optum p/b Kelly Benefit Strategies, who makes her home in Squamish, provided the fastest overall time Wednesday night, winning and claiming the $13,000 first prize in a sprint to the finish ahead of New Zealander Jo Kiesanowski of Team TIBCO To The Top, who won the UBC Grand Prix p/b Mahony & Sons on Tuesday. The field was the largest thus far for a BC Superweek race in 2014, with 75 riders on the start line.

Kirchmann barely got through a crash on the first corner on the final lap of the technical course over the cobblestones in Gastown. Her Optum teammates maintained a high pace and kept her out of trouble.

“It was a really hectic last lap, I had faith in my team that they were going to set me up with a really fast lead out. I guess there was a crash – or a near crash – around the first corner, I actually felt someone run into my foot and my wheel, but I held it up and was able to stay ahead of the field,” she said.

Team TIBCO To The Top ended up with two riders on the podium as Samantha Schneider of West Allis, Wisconsin was third. For Schneider, it’s the second top-3 finish of BC Superweek, after she claimed second in Sunday’s White Spot | Delta Road Race.

The 23-year-old was also almost a victim of the mishap on the final lap.

“Coming off the first corner, there was unfortunately a crash from the inside, it went out and luckily my teammate, Jo and I got saved,” explained Schneider. “Leah made it through and (it was) single file all through the last lap and I couldn’t come around today, but it’s awesome racing here in Gastown, (BC Superweek) is really fun racing. We’re super happy we were able to come out and race here.”

The race was close right to the end, with there being very few breakaways – and each time a group of riders broke loose, the peloton reeled them back in, which made for the thrilling finish.

The $13,000 payday is the largest in North America – and one of the largest in the world – for a women’s criterium, a fact that Kirchmann was ecstatic to be reminded of.

She added, “This is a monumental achievement for me in my career and my team – and for women’s cycling – so thank you Global Relay!”