Much has been made of Florenz Knauer’s history at the Steve Nash Fitness World presents Tour de White Rock. There’s just something about riding the event that brings out the best in Knauer – although he’s actually done very well at all BC Superweek events since first coming from Germany to race the series in 2012.

​ On Friday at the Choices Markets Criterium, Knauer, who now makes his home in Tsawwassen, nabbed his third career win at the Tour de White Rock. Depending on his result in Sunday’s Peace Arch News Road Race, he is in line to pick up his fourth career omnium at the event after claiming the overall points for three consecutive years from 2012 to 2014. The 28-year-old’s success over the years has earned him the nickname of “Mr. Tour de White Rock”.

“I’ve been here now six years, I know the course fits me and I was totally out for the win. I went in the middle of the hill – like every year,” laughed the Stradalli Safatti sprinter. “I figured because we had headwind up on the straight, it was a bit early and I had to be careful, but after the crowd prime and the lead out of the Canadian guys, it was perfect for me and I just hit it hard. I opened a gap and saw it could work for me today.”

The Garneau-Quebecor team was one of the biggest in Friday’s 60-lap, 60-kilomete criterium, with six riders taking the start line out of 91. The best result was by 24-year-old Felix Cote-Bouvette, who sprinted just behind Knauer with a time of one hour, eight minutes and 46 seconds.

“We’ve been doing pretty well here, and I think we missed a little bit of luck, so we were trying stuff and we’re here to race hard. Whether we’re on the podium or not, we’re going to come out fighting and it’s nice to actually get on it,” Cote-Bouvette said. “We’ve had a couple of close calls and we’ve been working well together, so I think the team will be happy and I’m happy, it’s pretty nice.”

When Knauer attacked on the straightaway up Fir Street, Cote-Bouvette was well aware of the threat. “We were teammates a few years ago on H&R Block and we’re pretty good friends,” he said. “Florenz goes early in this race, every time – every single time! Next time maybe I’ll be the first one to attack, we’ll see.”

Four-time junior world champion Campbell Stewart was on the podium for the third straight race at BC Superweek, after winning Friday’s PoCo Grand Prix and Thursday’s Giro di Burnaby.

“It’s a very hard course, these boys rode pretty strong, all the teams were riding hard, trying to get a break going and I enjoyed it, it was a great time,” said the 18-year-old, who was riding for Cycling New Zealand. “We were pretty open to everything, we only had three riders today so we wanted to mix it up a little and just give it a crack to see how the race was going to play out. I just sat back for the last few laps, followed a few wheels and tried to go for it, but these two guys were just a bit stronger today.”

With a number of Cycling New Zealand riders making their first trip to race BC Superweek, the series and the Lower Mainland communities definitely left an impression.

“I was just talking to some people who have been riding in America (this week), and I told them I’m probably going to come over here next year and give this one a crack instead,” Campbell said. “It’s been an awesome week and everyone on the team’s enjoyed it, so we’ll definitely be back.” 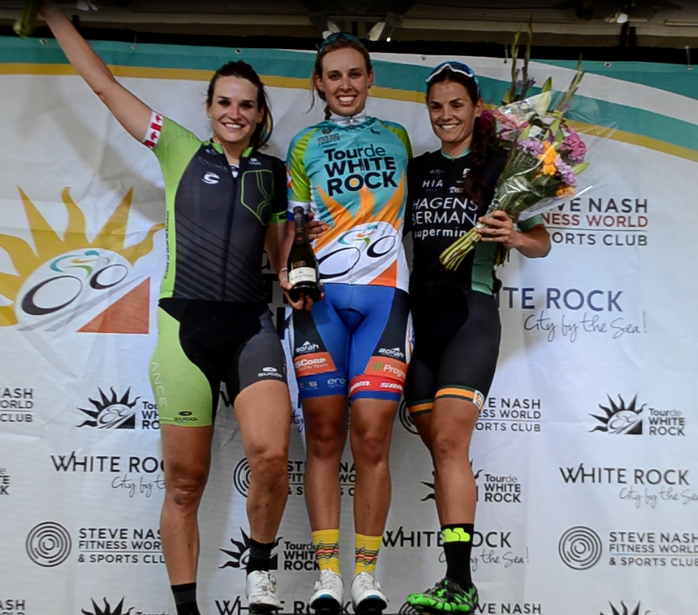 The three riders who made it to the podium in the Choices Markets Criterium at Steve Nash Fitness World presents Tour de White Rock are each familiar names at BC Superweek. However, for Josie Talbot and Lizzie Williams, it’s because of their performance in the races this year. For Joelle Numainville, it’s not only because of how she’s done this year, but in previous years as well – the 2012 Canadian Olympian has been riding BC Superweek since 2006. Between the three of them, they have a combined 17 top-10 finishes at BC Superweek this year though.

Talbot, who is riding for Wisconsin-based ISCorp p/b Progress, was third at the Tour de Delta’s Ladner crit last Saturday as well as on Thursday at the Giro di Burnaby presented by Appia Development. The 20-year-old was also fourth in the New West Grand Prix on Tuesday, the PoCo Grand Prix presented by Dominion Lending Centres on Friday, and fifth in last Sunday’s Tour de Delta White Spot | Delta Road Race. However, she had not tasted victory until Saturday. It was clear her ISCorp team had its collective eye on the prize, not chasing the impressive primes offered in White Rock.

“We always come to win the race first and then the primes second. I was just focused on that win because that hill on the top straightaway of the course hurt lots, we didn’t want to waste too much energy,” said the Aussie who now lives in the United States. She has already made a name for herself as a junior rider, including winning the junior team pursuit world title and two bronze medals at the 2014 Junior Track World Championships.

Regarding the course in White Rock, the plan was to be first into the final corner at Johnston and Roper and hang on to the finish line. “The line comes up on you really quick on the downhill so definitely first to that corner is the best option,” Talbot said, impressed by the field of riders at the Tour de White Rock and BC Superweek. “I never feel confident around these girls. I was just making sure my last push to the corner was strong enough so they wouldn’t come around.”

Saturday’s 30-lap, 30 kilometre course was a big challenge for the 29-year-old Numainville, despite the fact she’s ridden it a number of times – she’s riding this year without any teammates and like Talbot, is impressed by the field.

“It’s super hard, the young talent from Canada is racing super strong, Maggie Coles-Lyster is there and she’s been there all week, so it’s cool to see her. I’ve been coming here since I was 16, so it’s more than ten years, and I really appreciate what you do,” said the three-time Canadian National Road Race Champion. “BC Superweek is one of the greatest races in the country and I love it. It’s the best ten days of the year! Thank you everybody, it’s really awesome!”

Numainville has been a top-10 finisher in every race at BC Superweek she’s started this year, including top-5 finishes in the Ladner Criterium and the Global Relay Gastown Grand Prix.

33-year-old Aussie Lizzie Williams quit cycling in 2004 and returned in 2014, but it doesn’t appear her time away hindered her riding. The Hagens Berman | Supermint rider has finished top-6 in every single BC Superweek race this year. In addition to the third place in White Rock on Friday, she also came third a week ago at the MK Delta Lands Criterium and second at the White Spot | Delta Road Race.

BC Superweek wraps up on Sunday with Steve Nash Fitness World presents Tour de White Rock Peace Arch News Road Race. The women’s race starts at 9:00 am and the men begin at 9:05 am.