White Rock, BC – Often when a rider laps the field in a race, it makes for an anti-climactic finish, but the same couldn’t be said for Saturday’s Choices Markets Criterium, which kicked off the two-day Steve Nash Fitness World presents Tour de White Rock.

19 year old Liam Magennis went off the front of the pack just three laps into the 60 lap, 60 kilometre race and managed to be brought up to the bunch by his Subaru NSWIS & MS teammates more than halfway through and it looked like he would cruise to the win.

However, there was a break of seven other riders who had a different idea and not only lapped the field themselves, but also brought Magennis back. The events of the race caused officials to proclaim that the field would sprint for position with four laps remaining and the final eight would then use those last four laps to go for the win.

When the chase group came across, Magennis knew he had teammate Ayden Toovey as part of it, which played a big role in strategizing for the win.

“I knew that Ayden was there and he’d be getting a pretty easy ride coming across and he’d have good legs once he got to where I was,” he explained. “It was tricky when they were close because I wasn’t sure who came across, so didn’t know who I was up against at the end.”

It fits Magennis’ mantra as written on his Port Macquarie Cycling Club profile – “it is easier to win from a small bunch than a big bunch!” And it’s clear that he and his team planned to go for that small bunch straight from the gun – and may have caught some riders off guard.

“We knew it was going to be a tough race, so we wanted to make it hard from the gun and get rid of as many riders as we could from the start. It is pretty good – after working with my teammate Scott (Law) all week – to get a first place result,” said Magennis.

In second was Calgary’s Kris Dahl, who races for Silber Pro Cycling and already has two podium appearances at BC Superweek this year – second at the MK Delta Lands Criterium eight days ago as well as Thursday’s Giro di Burnaby. He notes the final four laps with the break of eight was a game of cat and mouse.

“It was a tough last couple of laps, the Aussies hit it with four to go for the crowd prime and just kept the gap going. I did a fair bit of work to close it and luckily I had my teammate Nick Masbourian there to help me out with that and once it was all together, it was like a match sprint on the track,” said Dahl, who won the U23 Canadian National Championships Individual Time Trial in 2014. “I took the front and just watched the whole lap, I think I rode a whole lap looking backwards, and went for the sprint and the Aussies just had the legs and beat me in the last corner.”

Third place finisher and Abbotsford resident Will Routley, riding for Minneapolis-based Rally Cycling, had to put in a huge dig when he saw the break and chase group just over halfway through the race. The 33 year old veteran felt it even more after suffering the effects of a crash during the Giro di Burnaby two days ago.

“That was a pretty painful effort, I actually had to jump up on the sidewalk to get past a couple of guys who were trying to block the road. For me tonight, it was just suffering the entire time, I’m pretty sore from Thursday night’s crash, so if I’m going to suffer, I may as well suffer off the front instead of in the pack,” he said.

The third place finish is Routley’s first appearance on the podium during BC Superweek this year after two last year. He was third at the Tour de Delta MK Delta Lands Criterium and Global Relay Gastown Grand Prix in 2015. 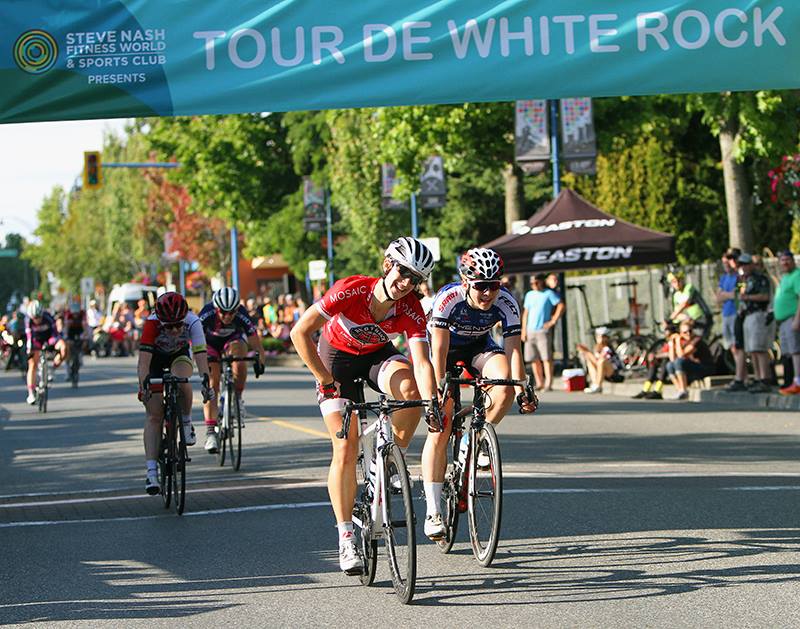 An adventurer by heart, Vancouver’s Sara Bergen from Trek Red Truck p/b Mosaic Homes has had quite an adventure at BC Superweek thus far this year with two second place finishes, but she finally found herself atop the mountain on Saturday with a win in the Choices Markets Criterium as part of Steve Nash Fitness World presents Tour de White Rock.

Two-thirds of the way through the race, Bergen and reigning Canadian National Road Race champion Annie Foreman-Mackey from The Cyclery OPUS team built a 21 second gap on the field before the peloton came back together. Once the field gathered she and Foreman-Mackey back in, Bergen was still confident she and her team could get the win and the $1,000 first prize.

“I felt really strong coming into today, I knew Gillian (Ellsay) and Denise (Ramsden) had my back going out there, so did Kinley (Gibson), Suzanne (Hamilton), Leah (Guloien) and everyone else who was riding,” Bergen said. “Once I got off the front, I thought, ‘Alright, it’s a bit early, but you committed to this, so let’s make it happen.’ Denise gave me a fantastic lead out up and over the corner in the sprint and then it was pretty much all me to let loose the guns, so I just put my head down and went for it.”

In the break, Bergen and Foreman-Mackey were actually sharing the workload.

“The Cyclery did a fantastic job today, they raced really, really aggressively, and that’s kind of our style too, so it was fun playing off that and putting in the digs where we could,” she explained.

Jackson is heating up as BC Superweek winds down, with podium finishes in four of the last five races. She’s riding without her usual TWENTY16 Pro Cycling team, instead wearing the Canadian National jersey.

“I tried to do as little work as possible, but it’s a really hard course, it’s the end of the week and people are tired. No one else was chasing, I know I’m strong, but it’s hard to pull a whole race together and then sprint for a win. I think it was a strong race for me anyway,” said 27 year old Jackson, who’s a graduate from Langley’s Trinity Western University and alternate for the Canadian Olympic team which will compete in Rio next month.

When Bergen and Foreman-Mackey broke away with ten laps to go, Jackson didn’t think for a second that that’s the way the race would finish.

“It’s never over. It’s never over till it’s over. It was still fairly early on, we could still rally some effort to pull it back because when you work together, that’s the whole point of teams in the sport. You work together to bring stuff like that back, so I wasn’t worried,” she said.

Independent rider Hodges is also getting used to being on the podium at BC Superweek as she’s been among the top three riders in three of the last four races, including a win in Friday’s PoCo Grand Prix p/b Dominion Lending Centres. She and Jackson worked well together during the Choices Markets Criterium, knowing that neither of them had a group of teammates to lean on.

“We were both out there by ourselves today, so it was in our best interests if we helped each other a little bit because we were getting worked over pretty badly by the teams,” said the 24 year old who rides for the High5 Dream Team back home in Australia. “They kept going on the attack and we were left by ourselves to chase so it was up to the both of us to chase if we wanted to be there to contest the finish.”

Hodges is among a large contingent of Aussie riders competing in BC Superweek this year on both the men’s and women’s side, and it has left a lasting impression.

“I am loving my time here, it’s been pretty great, I’ve been staying with some pretty great people and I’m being looked after really well, I’ve had a ball.”