North Delta, BC – At the risk of sounding too cliché, it was like déjà vu all over again at the fifth annual MK Delta Lands Criterium to kick off the 15th edition of the Tour de Delta and 2015 BC Superweek as Ryan Roth of Silber Pro Cycling won for the second year in a row – and in strikingly similar fashion.

A year ago, Roth, who was the 2012 Elite Men’s Canadian National Road Race Champion, finished nearly six seconds ahead of the second place rider. This year, he was even better – crossing the finish line almost eleven seconds ahead of Garrett McLeod of Team H&R Block Pro Cycling, finishing the 48-kilometre, 40-lap race in one hour, two minutes, and 48 seconds.

It continues a strong run of podium appearances for the Silber Pro Cycling team after Roth was third at last month’s Canadian National Championship Road Race and second in the Individual Time Trial. His Silber teammate, Benjamin Perry, won the Canadian Road National Criterium title and Stage 5 of the Tour de Beauce in June.

“We had a few races in the spring to find our cohesion and legs together,” the Kitchener, Ontario product said of his team’s recent success. “Since then, we’ve been gelling really well and playing off each other and it’s been going great. We’ll have a bit of a rest in August and then we’re waiting to see about the Tour of Alberta, hopefully we’ll get in there and that will cap our season.”

As the race progressed and the breakaway started to develop, third place finisher Will Routley found himself without a teammate nearby, and was surrounded by riders from either Silber or H&R Block.

“Once Ryan came up it changed the dynamic a little bit, he won this last year so he knows what he’s doing and made it tough. I tried a few times (to go for it), but the better man won tonight,” the 32-year-old from Whistler, BC conceded. “I’ve been teammates with Ryan before and he’s a good bike rider.”

Routley finished just back of McLeod, but he wasn’t too upset about being topped by someone six years younger.

“At the end to get out-sprinted by Garrett, I actually was kind of happy because I’ve been coaching him for a couple of years so I know he’s motivated. He’s been training well the last month and it shows – he’s riding well too. Maybe I’m turning into an old man… I’m getting washed up here,” Routley added, tongue firmly planted in cheek. 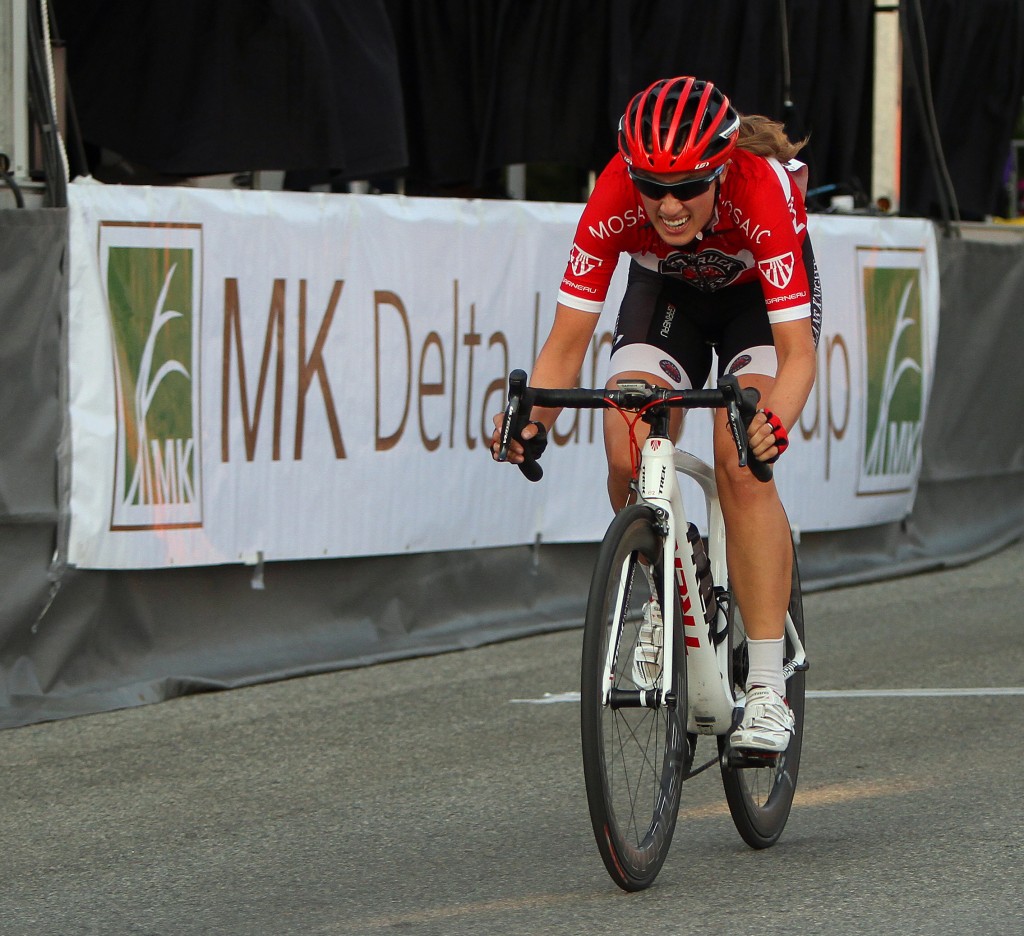 Much like Roth, it seems that Vancouver’s Denise Ramsden could set up camp on the podium at the MK Delta Criterium. For the second straight year, the Trek Red Truck p/b Mosaic Homes rider won the fifth edition of the race, finishing the 30-lap, 36 kilometre circuit in 55 minutes and 30 seconds. The back-to-back titles come after a second place finish for Ramsden at the same race in 2013.

Ramsden, who was a member of the 2012 Canadian Team at the London Olympics, along with second place finisher Ellen Watters of Sussex, New Brunswick, broke away from the peloton with ten laps to go and were able to hang on to the end. For Ramsden, she drew upon her previous years of experience on the course.

“I think it’s just a hard race, so it seems to break up (each year),” she explained. “It’s three years in a row actually that I’ve been in a break at the end. The first year I kind up messed up the finish and lost the sprint so then last year I figured it out, and I pretty much did the same thing this year, going with a lap to go.”

As for the point when Ramsden and Watters found themselves on their own with a third of the race still to go, they started working together and knew one of them would go for the win with a sprint.

“I think by that point everyone’s pretty tired, so we were rolling through pretty well and then I told her ‘I think we have enough’ and then I just went at the end,” Ramsden said.

For her part, Watters knew she couldn’t let too much distance get between her and Ramsden.

“I was taking a little bit of a break and Denise took off, so I thought ‘I should follow that wheel!’ so I did and it was hard for the last ten laps,” added Watters. “Then Denise killed it in the last lap.”

On the final lap, feeling the burn of 29 previous laps, Ramsden was definitely aware of the surging group of riders behind her, especially into the final turns. “I kept checking back to see and knew that the group would be going even harder at the finish so I just had to save a little bit for that,” she said.

In third was two-time US National Criterium Champion Shelley Olds of the Ale Cipollini Team. The 34-year-old hasn’t been to BC Superweek since 2007, but she was eager to hit the course in North Delta – taking a spin around well before having to line up for the start of the race. It paid off for the Groton, Massachusetts product as she won a number of primes.

“I’m here just trying get in some good training and have fun,” said Olds, who’s racing the BC Superweek series without any of her teammates. “I look forward to racing the rest of the series and then heading to Paris for the women’s Tour de France.”

BC Superweek continues with the Brenco Criterium in Ladner, which is Stage 2 of the Tour de Delta, on Saturday night. Then the Tour de Delta wraps up Sunday morning with the White Spot | Delta UCI 1.2 Road Race in Tsawwassen.