Burnaby, BC – The dominance of UnitedHealthcare at BC Superweek continued on Thursday night at the Giro di Burnaby p/b Appia Developments as the Oakland, California-based team swept the podium for the second time in the series.

And not only did UnitedHealthcare continue to be dominant, but so did Sandwich, Massachusetts rider Luke Keough, who posted his third, first place finish at BC Superweek after victories in yesterday’s Global Relay Gastown Grand Prix and Tuesday’s UBC Grand Prix p/b Mahony & Sons.

The 45-lap, 55 kilometre race was close throughout, with a number of riders trying to breakaway from the peloton at various times, but each time they were reeled in. Keough and his teammates figured it would come down to a sprint to the finish.

“We knew this race was going to be really aggressive with the way the course is set up with the 180 down there (at the east end), so we knew we had to race most of the race before we could try and control it a bit. It was a great race though,” he explained.

Aussie Hilton Clarke, who won the Giro di Burnaby in 2006 and was second in Tuesday’s UBC Grand Prix, is UnitedHealthcare’s Road Captain, and he admits that they didn’t really look to go on a break.

“We have a few guys on the team who are just so strong and to tell you the truth, in the last lap it was harder holding on to our teammates’ wheel than coming down the home stretch because they just went so hard. (My teammates) Brad White, Adrian Hegyvary and Karl Menzies are so strong and if you see Karl, he looks like a linebacker and the last bit of his turn, we were basically screaming at him to go easy,” Clarke said. “He did a great job and it’s such a great crowd here and we’re just happy to take this race. It’s just a pleasure to come to Canada and do these three races.”

With the way Thursday’s criterium shook down, it looked like it was every man for himself in the final lap, but UnitedHealthcare definitely had a strategy.

“We have positions, and when dialed (in), the team works amazing, everyone knows what they have to do and it’s all about execution, and it worked out perfectly,” Keough explained.

Although the field was a bit smaller than Wednesday’s Global Relay Gastown Grand Prix, there were still a number of formidable riders in the Giro. The final five laps saw attacks from Sebastian Molano of Team Colombia and Jan-Niklas Droste of Team Heizomat specifically. It’s something UnitedHealthcare was aware of.

“A little bit, but I had my team working for me and (they were) absolutely amazing, we have some of the strongest riders in the world, we couldn’t do it without them and it’s a pleasure to be here,” continued Keough.

Second place rider Ken Hanson of San Diego, who also races for UnitedHealthcare, is quick to give credit the other teams and riders after they put up a good fight, noting there were some who really impressed him.

“There’s a bunch of the German guys who we don’t really race against that much and the last couple of nights, they were off the front towards the end of the race and you’ve got to keep a close eye on those guys because if you let them get a little too much of a gap, you can’t bring it back,” said Hanson. “The team worked hard last night (at Gastown) and this course is really tough, especially with the u-turn and we controlled the end of the race. It’s not easy, it’s hard work and everyone does their part and we just followed the plan and it worked out really well for us.”

Hanson won the Global Relay Gastown Grand Prix in 2012 and 2013, finished third at the race last night, and was also third at the UBC Grand Prix on Tuesday. He was victorious at the Giro di Burnaby in 2012. 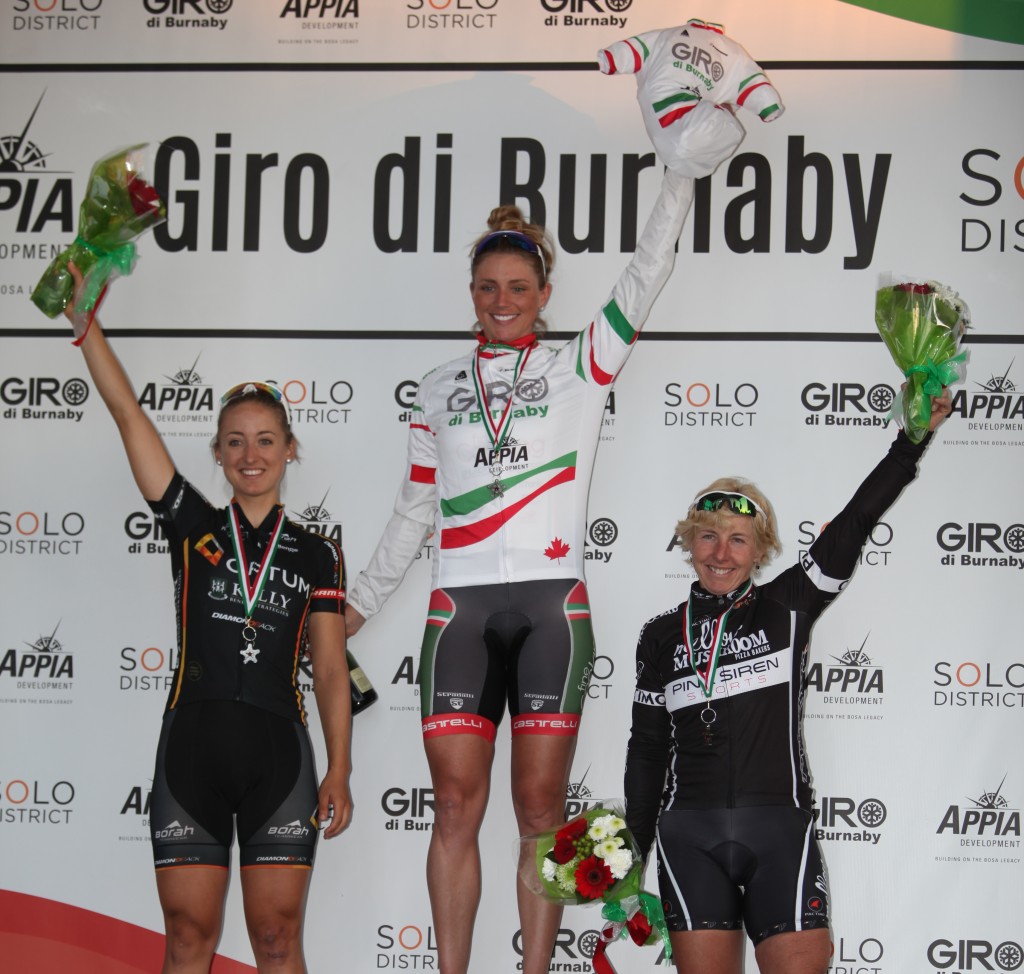 Since the Giro di Burnaby p/b Appia Developments is a race named as a tribute to the city’s Italian community and the world famous Giro d’Italia, it only seems fitting that a rider from a team sponsored by a company formed in Sant’Elia a Pianisi, located in the Molise region of Italy, win the 2014 edition of the event.

It was a stark difference from last year’s race, which saw Kirchmann’s teammate and 2012 Canadian Olympian Denise Ramsden carry an 11-second lead to victory. This year, there were a few situations where small breakaways formed, but overall, no riders really got away from the pack. It’s something that the athletes on the course realized relatively early on.

“(We noticed) maybe one third into the race. With the way the wind was blowing, the way the attacks were coming back, we got direction from our Director James Carney that it was going to be a field sprint. I was just able to cover important moves with my teammates Jessica (Prinner) and Mary (Zider) to make sure we were there if anything did go,” Allar said. “Last night I actually got caught behind a crash in the top corner on the last lap so I wasn’t actually able to contest the sprint, so I was super motivated coming into today.”

For Kirchmann, the podium appearances continue to pile up at this year’s BC Superweek as the Squamish resident has now five top-2 finishes in six races, including wins at Saturday’s Brenco Criterium in Ladner, Sunday’s White Rock | Delta Road Race in Tsawwassen and last night’s Global Relay Gastown Grand Prix. She was also second in Tuesday’s UBC Grand Prix. Kirchmann is a four-time Canadian Criterium National Champion (2014, 2013, 2011, 2010) and also claimed silver at the 2012 Pan American Championships Road Race. Kirchmann is also the reigning National Time Trial and Road Race Champion.

Third place went to Laura Gilder of Team Mellow Mushroom Racing. Gilder, who won the Giro di Burnaby in 2012. Back then, she said she fully expected to be racing when she was 50, and now she’s just five months away from the milestone and shows no signs of slowing down. The native of Cresco, Pennsylvania also made the podium in the UBC Grand Prix on Tuesday, finishing in third place there.