The race was anything but normal at the Choices Markets Criterium on Saturday to kick off the Tour de White Rock presented by Landmark Premiere Properties. With more than half of the 60-lap, 60 kilometre race remaining, Hermann Radteam rider Christopher Hatz, who cleaned up a ton of primes at Wednesday’s Global Relay Gastown Grand Prix, jumped ahead of the peloton in a solo break. It caused a reaction from Rally Cycling’s Eric Young and Silber Pro Cycling veteran Ryan Roth.

Both Young and Roth saw Hatz go up the road and countered. The three stayed away from the pack until the 27th lap when they lapped the field. Hatz had some intel from his teammate Florenz Knauer on which riders were a threat coming into BC Superweek, knowing that Rally and Silber would be two of the biggest.

“Florenz already told me who I should watch. First, I made it alone, but then Eric and Ryan joined me. It worked quite well, we had a good group and I didn’t expect that we’d lap the field so fast,” said Hatz.

With three laps to go, the race announcers signaled for the field to sprint for all positions after third place, leaving Hatz, Roth and Young to battle for the top three spots on the podium. It didn’t go according to plan as a crash in the peloton on the back side of the course on the final lap caused Hatz to go down, Young to leave the course to avoid it, and Roth to sail through the gap and take the win.

“I was just marking Eric and Chris, knowing that we would separate ourselves anyway and then the crash happened, I was just behind it and happened to weave through, so it was just luck,” said Roth, who was 2012 Canadian National Road Race Champion.

Despite things being a bit chaotic on the final four laps, the second-place finish continues an impressive stretch for Young, as he has now been on the podium for seven of the eight races thus far at BC Superweek, including four wins. He used the knowledge of what Hatz did in Gastown to counter the breakaway early on.

“I didn’t really want Hatz up there without one of our guys, so I just got on it. It turned into a good move with Ryan up there too, then we all contributed, drilled it hard, and about halfway through the race caught the back. I was excited, it’s a fun way to race, you only get to lap the field with just two other guys occasionally. I was looking forward to the finish, but it didn’t really pan out.”

Roth, who won the Tour de White Rock Road Race in 2016 and came fifth last year, and his Silber team has had a bit of a roller coaster at BC Superweek this year. “We had two of our best guys crash on the first weekend and they didn’t race until today, so luck goes both ways. Tomorrow is a super hard race and I’m looking forward to it.” 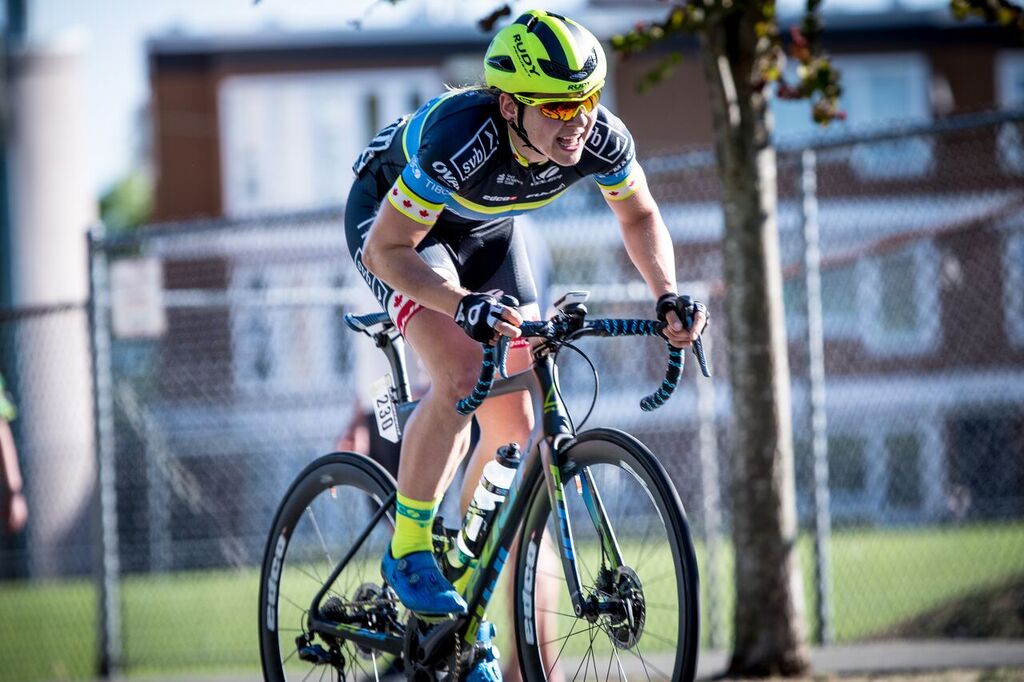 TIBCO – Silicon Valley Bank only had two riders in the field at Saturday’s Tour de White Rock presented by Landmark Premiere Properties Choices Markets Criterium, but it was one of their riders atop the podium for the sixth time at BC Superweek as Vermillion, Alberta’s Alison Jackson sprinted to get the win. Jackson did a ton of work for teammate Kendall Ryan at BC Superweek, but with Ryan back home preparing to head to race in Europe, it was Jackson’s chance to take the win for her team.

“We had to be really smart and read the race. My teammate Nicky Bruderer just rode her legs out for me and I just waited… had to bridge a few dangerous things, and then she just lit it up hard on the last climb when it was together, and I sprinted like ‘The Kendall’!” laughed Jackson, referring to Ryan’s dominance throughout this year’s BC Superweek series, including five wins.

Jackson has traditionally done extremely well at the Tour de White Rock since she first rode it in 2014. That year she won the hill climb, and with Saturday’s victory, now has eight top-five finishes at the event that wraps up BC Superweek. She’s also won the Tour de White Rock omnium three times and is in good shape to take it a fourth time this year.

“White Rock was my first win ever, it got me my first pro contract, and my career really snowballed from there. Races like this where you put the pro women with the local girls are a great opportunity,” said Jackson, who was the 2015 Canadian National Criterium Champion. “I think it’s so cool that there were a couple of juniors that are local here riding, they’ll learn from this opportunity and soak it in. It’s really cool for me to be leading in the Tour de White Rock and we’re looking for a good, hard, hot day in the road race tomorrow.”

Ariane Bonhomme, a 23-year-old from Gatineau, Quebec riding for Cyclery Racing, came second. Much like Jackson, Bonhomme has raced the Tour de White Rock for several years and learned a lot from the rest of the riders in the field.

“I think we always come here to compete against the big pro teams in North America, so getting on the podium is really exciting, that’s what we were looking for all week,” said Bonhomme, who was the 2017 under-23 Canadian national road and time trial champion. “This is our second podium (at BC Superweek) and we’re happy about that. It was a hard race and that always gives me an advantage a little bit, so I was really going for it. The team was really supporting me and I’m really happy with their teamwork and it worked out.”

Maple Ridge, BC’s Maggie Coles-Lyster is ending BC Superweek with a bang as the 19-year-old finds herself on the podium for the third straight race. She was also third in Friday’s PoCo Grand Prix presented by Dominion Lending Centres, and second at Thursday’s Giro di Burnaby presented by Appia Developments.

“So far this BC Superweek has been my best, I’ve had two podiums so tonight I was hoping for that win, but my goal was to just come out and race aggressively, follow moves, and see where I could end up.”

BC Superweek concludes on Sunday with the Tour de White Rock presented Landmark Premiere Properties Westminster Savings Road Race. The pro women race at 10 am while the pro men take the start line at 10:05 pm. For more information, visit http://www.tourdewhiterock.ca