Eric Young is billed as one of the fastest sprinters in North America, and he showed it on Friday night as he won the MK Delta Lands Criterium in a bunch sprint of 11 riders. The group would have been even bigger, but a crash with three laps to go eliminated a number of riders from contention.

Young, who rides for Rally Cycling, had hoped to help some of the other sprinters on his team to tackle the subtle climbs as part of the course.

“We’ve got a strong team and I was a little bit far back because I was trying to help them and we left it a little bit too late to come through that top corner with a couple of guys,” said Young. “This finish is so hectic and short, it’s really kind of the luck of the draw who has the momentum into that last little bit is probably going to win – and that’s how I won.”

The race was a chess match throughout, with no one really separating themselves from the pack until the last few laps. With a 1.2 kilometre loop, it might look to the casual observer that the MK Delta Lands Criterium course is an easy one, but in this case, looks can be deceiving.

“Even if it looks easy, it never really is – especially on a course like this. Bike racing is a hard sport!” chuckled Young.

Young also heaped praise on the Tour de Delta for the MK Delta Lands Criterium course, which drew 131 riders to start this year’s edition of the race.

“This course is awesome, it’s fun to race – we don’t have too many races like it on the circuit that we all do. It’s enjoyable to do something different and BC has such a great cycling culture, every single year we come back, so we’re really looking forward to an awesome week. To start it off here with a win is awesome,” Young exclaimed.

The 28-year-old Young is the defending Global Relay Gastown Grand Prix champion and also finished among the top-10 in Gastown in 2013 and 2014, so being on or near the top of the podium during BC Superweek is nothing new to him.

Holowesko | Citadel Cycling Team rider John Murphy finished second behind Young in the sprint on Friday night. The 32-year-old is a former member of the powerhouse UnitedHealthCare team that has dominated a number of BC Superweek races in the past.

In third was Tsawwassen resident Florenz Knauer, who is riding for Stradalli Safetti. The German’s success at BC Superweek is becoming one of legend, as he was second at the MK Delta Lands Criterium in 2016. The 28-year-old had six top-10 finishes last year and in 2014 at BC Superweek events, along with five podium appearances in 2013 and 2015. 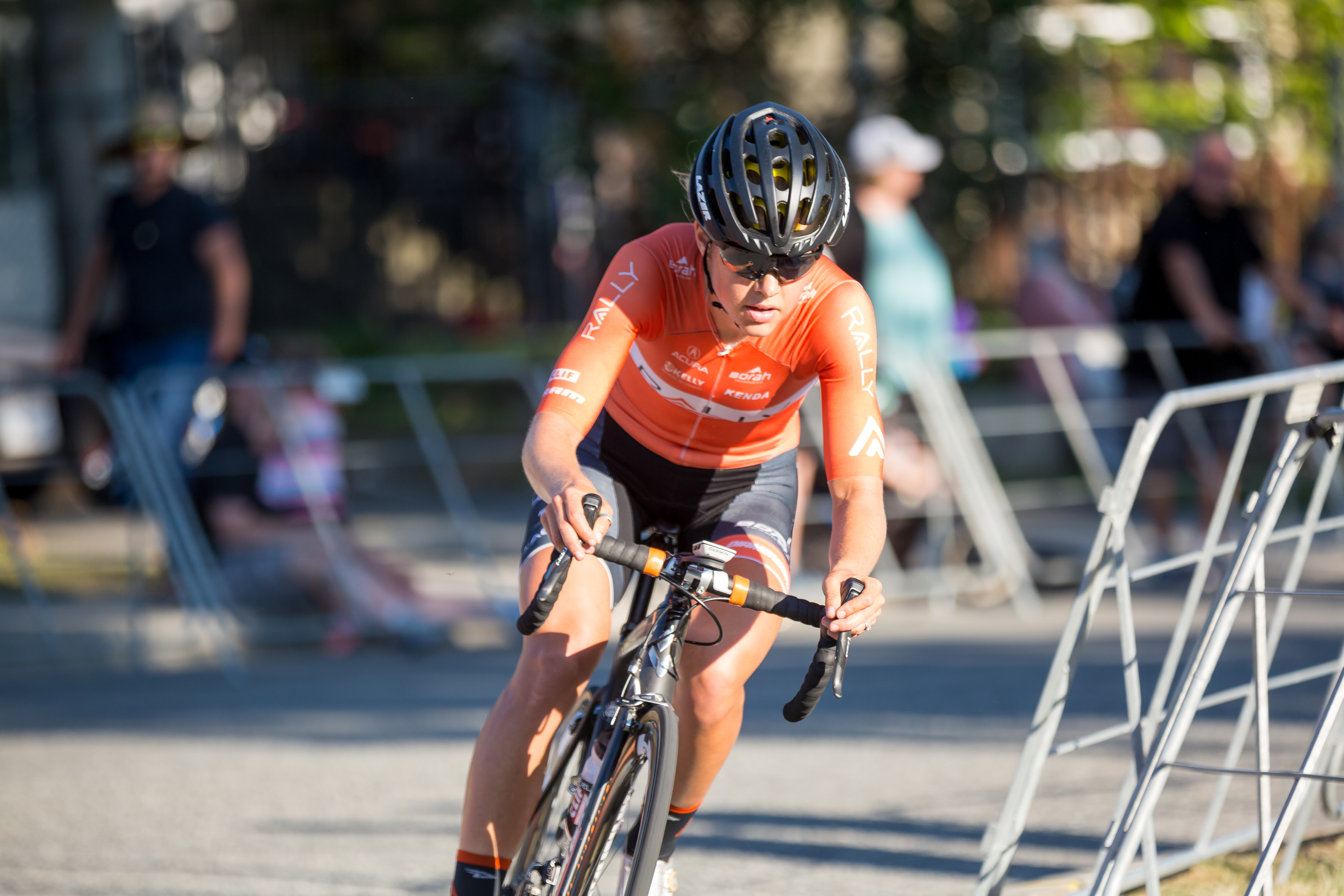 Five years ago, she gave up speed skating for cycling due to an injury and after turning pro in 2014 – racing on two wheels as opposed to two blades looks good on Kirsti Lay. The 29-year-old, who rides for Rally Cycling, opened up a 26-second lead early to claim victory in the 35-lap, 36-kilometre MK Delta Lands Criterium on Friday night to kick off BC Superweek and the Tour de Delta. However, having such a large lead so early in the race did not make things easy on her though.

“I had a great team behind me so I could take a risk early, I knew there was more than one of us that could finish off the race, and that’s the fun part of being on such a great team,” explained Lay, who was second in both last month’s Canadian road championships and May’s Grand Prix Cycliste de Gatineau.

“It’s always good to switch things up and keep racing exciting and the love of the sport going. This has been really fun to put a lot of effort into the road this year and it’s been a really good summer,” she explained.

In second – and 32 seconds back – was Lay’s teammate, Allison Beveridge, who is the reigning women’s Canadian road champion. The 24-year-old from Calgary relished in being a nuisance to other riders, to protect her Rally Cycling teammate’s position.

“It was really fun! I kind of got to be people’s shadow, which I’m sure was a bit frustrating, but Kirsti was just off the front riding super strong,” described Beveridge, who was also a teammate of Lay’s in the team pursuit at the 2016 Rio Olympics. “It gave us lots of options just to cover and have some fun out there, and watch her do all the hard work,”

Although it looked quite calculated that Lay went so early and separated herself from the pack, it wasn’t exactly the game plan Rally Cycling had going into the race.

“We were just going to read the race and see what happened out there. We know we have a good team with lots of cards to play so it leaves us with options and we just have to go race our bikes. It’s a lot of fun being able to go out and do that.”

In third was Elizabeth Williams from Hagens Berman | Supermint. The Melbourne, Australia native finished the race in one hour, three minutes and 22.44 seconds, four seconds behind Beveridge and 36 seconds back of Lay.

BC Superweek and the Tour de Delta continues on Saturday with the Ladner Criterium. The women’s race starts at 6:15 pm while the men begin at 7:25 pm.