After winning the 2018 PoCo Grand Prix presented by Dominion Lending Centres, 21-year-old Mitchell Ketler was pretty much speechless. The Winnipeg, Manitoba native used some cunning tactics to capitalize on the final lap to take the biggest win of his career.

“Oh yeah, for sure, it’s awesome. It’s like I’m dreaming!” said Ketler, who is attending Camosun College in Victoria, BC in electrical trades. “I just had to cut it tight on the final corner, I saw Rally going a little bit outside and I knew that was my chance.”

Ketler cut past Rally Cycling’s Eric Young, who’s been superb at BC Superweek thus far with four wins and six straight podiums, and Florenz Knauer, himself appearing on five podiums in six races this week. Heading into the final corner, the 29-year-old Knauer thought he had the win.

“I thought so. Eric went from the right side to the left and I lost all my momentum in the last corner. I went first but Mitch came on the inside way faster than me because I had to slow down, I guess I lost it in that corner.”

The second-place finish is the third straight for Knauer after coming in the same position in Thursday’s Giro di Burnaby presented by Appia Developments and Wednesday’s Global Relay Gastown Grand Prix. Friday’s race was the first ever twilight criterium in BC Superweek history, and the Hermann Radteam rider was impressed.

“It was awesome, the crowd was especially great here and it was a lot of fun. The lighting was perfect, the crew did an amazing job as always,” said Knauer, the owner of 34 top-10 finishes at BC Superweek since 2013.

The last ten laps of the 50-lap circuit were animated by the Marc Pro Cycling p/b Gym One team, which at one point had an aggressive lead out of four riders off the front. In the end, it was Sacramento, California’s William Myers coming in third place.

“We came in with one plan and that was to take the front with about ten to go and just ride it as hard as we could. I’m just happy I could get on the podium in the end and have a good race,” Myers explained.

Myers was once ranked among the top-10 in the world in a competitive video game, but on Friday, the 29-year-old was sure to inspire kids in the crowd to put down the video game controller and pick up a bike. He too recognized the importance of the last corner before the start/finish line in PoCo.

“I was maybe seventh wheel with two corners to go. I just opened it up on the inside, came by a couple of people, maybe fourth wheel into the last corner and just had a little more momentum than Eric did and got on the podium,” he said.

When it comes to racing BC Superweek, Myers – who won the Folsom Classic Criterium in May – loves the variety the series offers. “It’s really wonderful, it’s different than racing in the United States, having the teams we only get to race against a couple of times a year. It’s fun to race against different people, the courses are so hard, and the community really comes out and puts on a good show for us.” 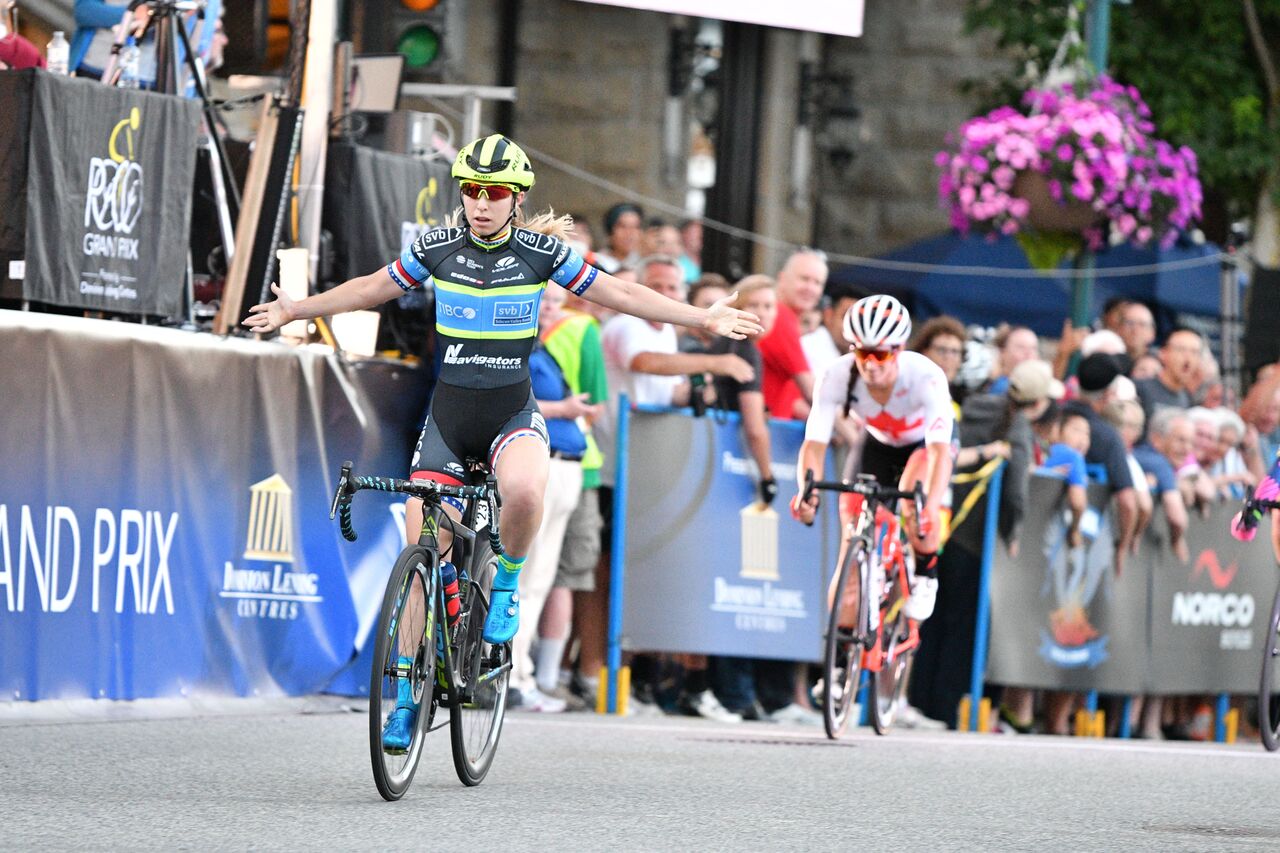 There’s something in the air in Canada that agrees with Team TIBCO – Silicon Valley Bank rider Kendall Ryan. The 25-year-old from Ventura, California is nearly unstoppable at BC Superweek this year after she sprinted to win the PoCo Grand Prix presented by Dominion Lending Centres on Friday night.

It’s her fifth win at the series and sixth podium in seven races – plus she’s won nearly $20,000 in prize money. She used a tactic that’s been successful for her earlier in BC Superweek, where she bided her time during the race and set up for a bunch sprint on the final lap.

“Rally Cycling’s been kicking our butts this entire week, we’re all really tired and there’s only three of us. I was pretty tired yesterday, so I tried to ride smart and my teammates were relentless in covering everything, being really smart about their energy,” said Ryan.

Vancouver’s Sara Bergen, who rides for Rally, came second for her third podium in four races at BC Superweek. She knew all too well how dangerous Ryan would be on the final lap.

“That’s racing for you, Kendall’s a super talented rider, so I guess that kind of blunts the pain a little getting beat by one of the best. It was a huge race for Kendall and I must give a big thanks to my team, we went out there and went after it tonight,” said Bergen, who is the reigning Canadian national criterium champion and off to Europe on Sunday to race. “I had a great time racing here, it was a ton of fun and it was another awesome crowd in PoCo.”

“I’ve just improved so much, and I’m so stoked to be on the podium,” said Coles-Lyster, who won the women’s points race at the 2017 UCI Track Cycling World Championships. “A win would be very nice, but we still have tomorrow night in White Rock, so we’ll see!”

Despite the third-place finish, the 19-year-old Coles-Lyster felt she should have had a better result.

“I totally messed up and had terrible positioning heading into that last lap. You just have to give it everything you have on that last stretch because it’s so important to be first going into the last corner. I just missed it by a little bit and that was it, but this is an amazing course!”